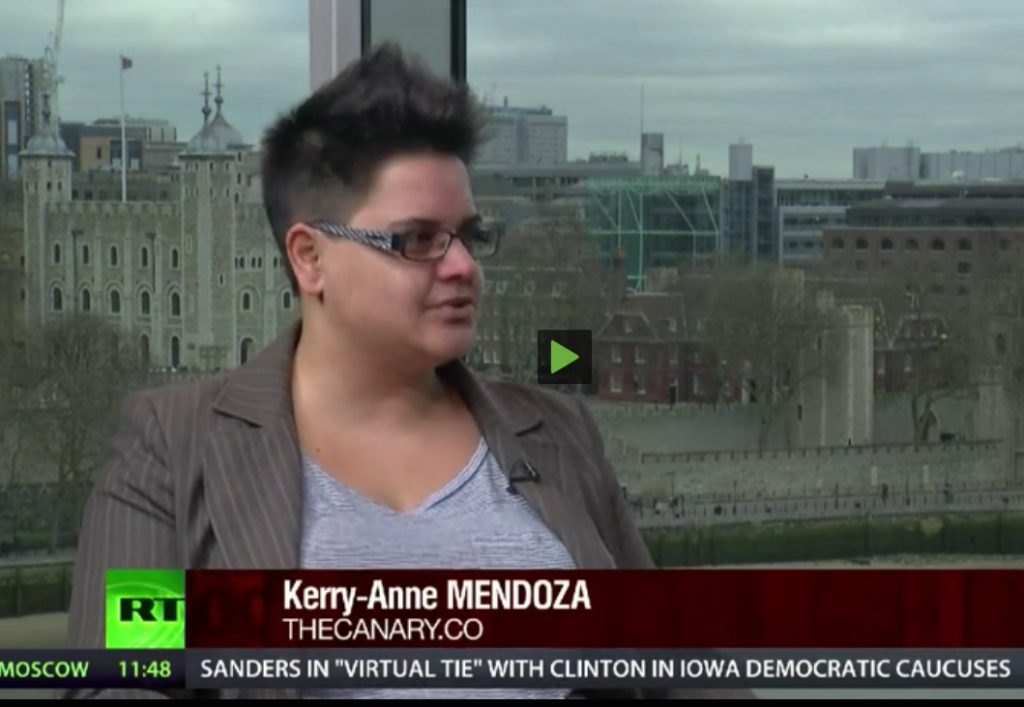 The mainstream media have largely accepted the Tories’ rationale for ‘austerity’. If we all just tighten our belts and pull together the economy will recover, which will benefit everyone. But a truly independent media movement is emerging to challenge this deception.

Kerry-anne Mendoza, Editor-in-Chief of The Canary, was interviewed on 1 February by Max Keiser on his RT show The Keiser Report. He begins by asking Mendoza, author of Austerity: The Demolition of the Welfare State and the Rise of the Zombie Economy, if austerity was introduced to trim the debt, but the debt has doubled, then what is the point of it? Her reply is that austerity is actually a “fig leaf” designed to conceal aggressive neoliberal policies. She said its essential function is to:

confiscate public assests and to put them into the private space.

To put this ramping-up of privatization into perspective, she points out that the Chancellor George Osborne will have, by the end of this year, sold off more public assets than those sold by Margaret Thatcher’s two most ruthless chancellors. Over the course of a decade, first Geoffrey Howe then Nigel Lawson sold off a total of £56bn of public resources to the private sector. Osborne has taken just 6 years as Chancellor to flog £58bn of the nation’s assets.

Keiser and Mendoza go on to discuss the devastating impact these radical changes are having on the British public. The Conservatives have overseen a drastic rise in suicide rates (including a 22% increase observed over a two-year period). Approximately 600 of these deaths, between 2010 and 2013, have been directly linked to the Department of Work and Pensions’ implementation of Work Capability Assessments for disabled people and those suffering long-term illness who claim out-of-work sickness benefit. These assessments have led to a further 279,000 acute mental health crises in the same period according to a study by Oxford University.

But it isn’t only those on the bottom rung who are suffering under aggressive capitalism. The UK’s middle class are seeing their quality of life undermined by soaring costs in relation to wages. Privatisation does not result in value for money. Rather, we are just charged more for services in order to generate the profits shareholders demand. As Mendoza says, Osborne is:

selling [public assets] off to his mates at bargain basement prices, and then we obviously still need the services, so we are then renting back from those people at astronomically more expensive prices.

In an attempt to distract us from this wholesale stripping of national assets to profit foreign investors, Mendoza identifies a disingenuous rhetoric from Downing Street that blames our misfortune on other victims of global capitalism: those fleeing wars fought for resources and geopolitical power. But, she says, it is the ruling elite in our own country that:

pose a far greater threat to daily life in Britain than these poor refugees trying to flee war in Syria.

This threat is not challenged by the mainstream media. We can no longer look to them to rigorously report on and hold those in power to account. This is because largely they are one and the same. To take just one recent example, Mendoza highlights the head of the BBC Trust, Rona Fairhead, who continues to sit on the board of HSBC drawing a £500,000 annual salary and is still business ambassador for David Cameron. With the concentration of power from corporations, political elites and the media in a handful of individuals, any notion of a critical, or even impartial, press is laughable.

This is why Mendoza has founded The Canary, to “disrupt the media model“. We believe a free, fair and fearless media is the bedrock of a functioning democracy, because for democracy to work, it requires informed consent from its citizens. We intend to help generate that informed consent by providing our readers with high-quality, well-researched and incisive journalism. Our content focuses on news, ideas, and key developments that impact democracy, equality and fairness.

Help us to continue to provide truly independent daily reporting on the issues that matter to you and expand our content by becoming a supporter.