Donald Trump's defeat may be funny, but Ted Cruz could be even worse - Canary 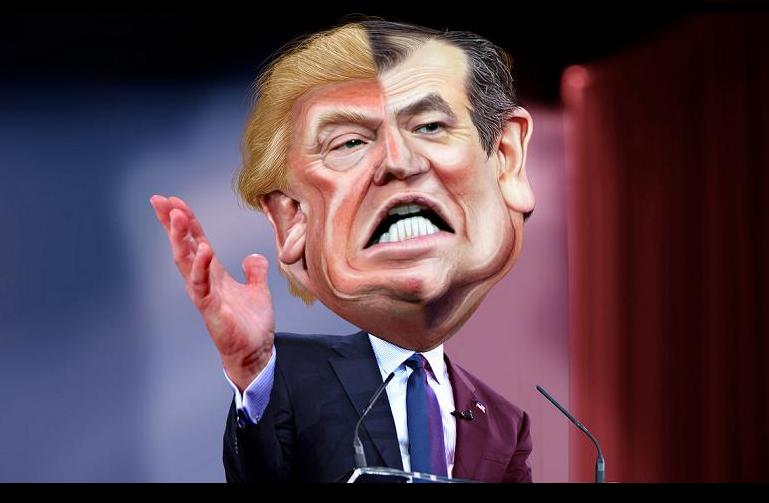 There is no doubt that Donald Trump’s upset defeat in the pre-Presidential Iowa caucus this week is a rightful source of mirth. He has spent months turning himself into a caricature of a hate-preacher. He has insulted women, Mexicans and Muslims alike with torrents of ignorant and degrading rhetoric unworthy of the (oval) office to which he aspires. So, on seeing him take a big wobble at the first hurdle, not to laugh would not be human. But while the news was amusing, it was not ‘good’, because the man who won the first caucus was Ted Cruz.

While Cruz tends to be less loud, there is little else to distinguish him from his more blood-and-thunder rival. What differences there are could arguably make him more dangerous than Trump, not less.

Cruz, who despite his drawling Texan accent is actually from Canada, has a policy platform that veers far more towards the ‘Tea party’ wing of the Republican party than the liberal wing. Study the policies, and his rhetoric, on paper, and you might struggle to tell whether this is his work or Trump’s.

One of Cruz’s major platforms is ‘Protecting the Second Amendment rights of Americans’. By which he means, ‘Everyone in America who wants a gun should have one, no matter what history they have, and no matter their mental state.’

For his own part, Trump’s position on gun control is the following:

The right of self-defense doesn’t stop at the end of your driveway. That’s why I have a concealed carry permit and why tens of millions of Americans do too. That permit should be valid in all 50 states.

This is Cruz’s view:

Citizens’ Second Amendment rights make us more safe, secure, and free. The Second Amendment is not simply about hunting or target practice. It’s about protecting our lives, families, and homes. When citizens cease to have the right to defend ourselves, we cease to be free.

It is probably unnecessary to rehearse Donald Trump’s position on international affairs, so much has it been in the news over the last eight months. He wants the border with Mexico closed, he wants Muslims barred from entering the USA, and he wants aggressive military action to destroy Daesh.

What of Ted Cruz’s position? Well, he boasts that, following the terrorist attacks in Paris, he

introduced the Terrorist Refugee Infiltration Prevention Act of 2015, immediately barring refugees to the United States from any country, such as Iraq or Syria that contains substantial territory controlled by a foreign terrorist organization.

Seeing refugees from Iraq and Syria will almost all be Muslims, Cruz is actively pursuing policies that bar Muslims from entering the USA. Difference? None that immediately leaps out. In terms of attacking Daesh, Trump appears more willing to welcome Russian efforts. But Cruz’s overall view of Daesh is just as paranoid and distorted as Trump’s.

The fact of the matter is our enemies are on the march… ISIS seeks to destroy our very way of life. We must defeat them. That starts by calling the enemy by its name – radical Islamic terrorism – and securing the border. Border security is national security.

Ah, so Cruz wants to close the border up as well. He believes that ISIS/Daesh is on the march and seeks to destroy the US way of life. This is not really true of course; by and large Daesh care little what the way of life is in the west, they mainly just want the Middle East ‘de-westernised’. But the untruth highlights the similarity between Cruz and Trump all the more; they both believe and perpetuate the same myth.

Trump wants to up military spending, complaining that 3% of GNP is ‘too low’. Meanwhile, Cruz thinks,

In order to restore America’s safety and security, we must rebuild our military.

So Ted Cruz wants to up military spending.

Then there is the matter of Israel. One of Cruz’s policy platforms is an unhesitating expression of support for the Israeli theocracy, titled ‘Stand With Israel‘.

A President Cruz will immediately reassess US policy towards the Palestinian Authority. Not one penny of American tax dollars should go to an organization that incites hatred against Jews and seeks to partner with the terrorist group Hamas.

There is no thought or mention anywhere in Cruz’s manifesto of Israeli atrocities in Gaza, or the casual day-to-day killing of Palestinians by Israeli security forces.

Trump arguably has a slightly frostier relationship with the Israelis. Before Christmas, his remarks about Muslims were seen as so extreme that the Israeli Prime Minister, Binyamin Netanyahu, actually condemned them. That may seem remarkable in itself, given Netanyahu’s general treatment of Palestinians and other neighbours of Israel. But the history of the Jewish diaspora as refugees in countries all over the world, especially during World War II, meant that Trump’s remarks hit close to the bone for many.

Apart from that recent slip, Trump has also been unswerving in his support for the Israeli state, no matter what it does to the Palestinians. A year ago he was quoted as saying,

We love Israel. We will fight for Israel 100 percent, 1,000 percent. It will be there forever.

All of which sounds like it could simply have been what Cruz said next after declaring that he will ‘Stand with Israel.’

So far, differences between the two Republican frontrunners are almost imperceptible. But the one area where there definitely are differences arguably establishes Trump as less dangerous. That area is religion.

Both men make a show of being devoted Christians, as any aspiring US president is compelled to claim. But there is much evidence to suggest that Trump is making the claim with his tongue-firmly-in-cheek. His persistent mistakes when observing church ritual in public strongly suggest a man with a casual attitude to faith. With Ted Cruz however, the religious fervour is so profound that the word ‘zealot’ would not be out of place.

Cruz’s platform on spiritual matters is titled ‘Religious Liberty’, but a study of its content shows that his definition is one-eyed.

The Pilgrims risked everything so that they could worship the Lord with all their hearts, minds, souls, and strength. The founders enshrined this right to live according to our faith in the First Amendment, and we must continue to celebrate and safeguard citizens’ God-given rights… Ted has spent his career defending religious liberty. He has fought to protect our First Amendment rights in a number of Supreme Court cases, and as U.S. Senator, he has been a tireless fighter for the right to freely live according to our faith.  As a presidential candidate, Ted Cruz has hosted two national religious liberties rallies and has brought together Christians who have been persecuted for their beliefs.

This has hazardous implications, especially on the issue of abortion. Ted Cruz is almost frenzied in his opposition to abortion. He does not accept that a woman should have more say over her own body than the Government. He even helps propagate the absurd controversy that Planned Parenthood trades body parts of aborted babies. (It does not; it sometimes sells foetal tissue to science for research and analysis.)

Trump’s position on abortion, however, is questionable. He spent many years claiming to be pro-choice but has recently declared himself to be pro-life. It seems likeliest that his ‘conversion’ was purely because he knew most Republican supporters will not want a pro-choice candidate. Either way, he is not as fanatical on the subject as Cruz.

Cruz has allowed his fervent Christianity to affect his policies on relatively trivial issues. For instance, he fought to keep the words ‘under God’ in both the Texas and Federal pledges of allegiance, supposedly to maintain traditional values. He seems quite unaware that the two words were only added to the pledge in 1954.

On same-sex marriage, again Cruz lets his supposed ‘Christian’ doctrine decide the day. He has explicitly referred to gay marriage as being somehow incompatible with ‘religious liberty’, and has consistently fought very hard to prevent marriage equality.

Trump’s own attitudes to same-sex couples are far from sympathetic. But religious dogma does not appear to play a big role in forming them. He has always opposed same-sex marriage, but for a while, he did support benefits for domestic partners. He later reversed that position, again ‘following-the-Republican-crowd’. But it is significant that he held it at all.

It is religious fanaticism that separates Ted Cruz from Donald Trump, and it is religious fanaticism that makes Ted Cruz even more dangerous than Donald Trump. The radical Christian right has been a severe danger within the Republican party since the 1980’s. Its poisonous mix of intolerance, willful ignorance and hell-fire stubbornness, is always a little too close to power in the mightiest country on Earth. Ted Cruz is merely one of the latest manifestations of that tradition.

Cruz may build on his success in Iowa to claim the Republican nomination for the Presidential election. If he does, it will still be crucial for human decency that the Democratic candidate wins. Be it Hillary Clinton or, preferably, Bernie Sanders, the next President of the United States must be a Democrat. The other way madness lies.

Religious interference in politics is a major problem in the USA, in spite of the explicit separation of church and state in the first amendment. You can help combat the encroachment of religious radicalism in the following ways; –