Cameron promised to 'trust' doctors, here's the video to prove it (VIDEO) - The Canary 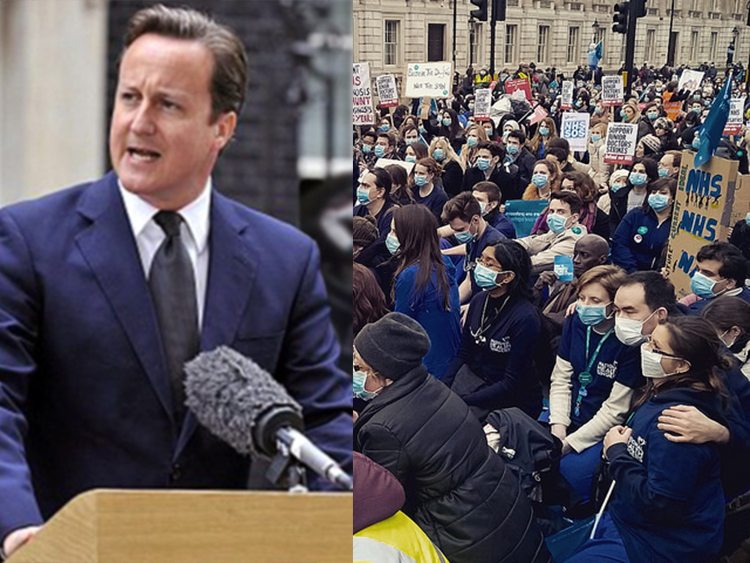 A video from 2007 is circulating online showing David Cameron speaking to a crowd of protesting junior doctors, promising them that the Conservatives will trust NHS staff to run the health service and would not impose top-down political priorities.

At the time, protesters were opposing then Labour health secretary Patricia Hewitt’s imposition of the unpopular and widely-criticised Medical Training Application Service (MTAS) that reformed and centralised the application process for specialist positions in the health service.

The video shows Cameron taking the stage in support of the protest, and mid-way through his speech stating that he’s “not [t]here to make a political speech” before immediately going on to attack Hewitt, calling her “the worst health secretary in the history of the NHS”. This vague, generic dig at Hewitt, who, after clashing with junior doctors over MTAS, soon shelved the system, criticised it herself and apologised publicly – twice – was thinly veiled with the preface ‘some people say’. This tactic is often used by journalists when they want to hide ideological attacks under a supposed reference to external sources.

In contrast, this recent poll indicates that Jeremy Hunt is currently the most disliked frontline politician of any party, due to his mishandling of the role given to him by the Prime Minister.

Three of Cameron’s claims during the speech stand out as being thrown into stark relief against his and Jeremy Hunt’s latest attack on the health service, this time also on junior doctors:

Cameron’s hypocrisy and empty political promises to working people could not be clearer than in this speech. The Tories seem determined to destroy the safety net for the most vulnerable in Britain. Their attack on junior doctors has shown their commitment to continuing their willful ignorance of those suffering by increasing inequality, job dissatisfaction, and insecurity –  putting both doctors and patients at risk.

It couldn’t be more embarrassing for the Prime Minister if he’d claimed this on a massive billboard.

Sign the petition for Jeremy Hunt to explain his actions to parliament.

Support The Canary so we can keep you informed on what your government is doing.