The West fights on the side of extremism in Syria, but Russia is making political solution a possibility - The Canary 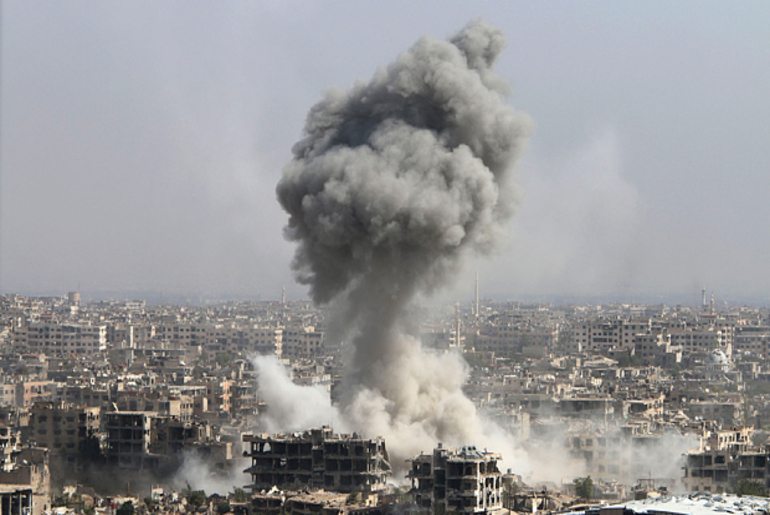 The Syrian ancient city of Aleppo has been in a cycle of siege since 2012. As fighting has raged throughout the city, atrocities have been committed by all sides. Now however, following the encirclement of the city by pro-Assad forces and with the help of Russian air support, the rebels look set to be dealt a decisive blow.

The siege began in 2012 when various rebel factions took charge of much of the city. Control of rebel-held zones has changed hands repeatedly since, with government forces regaining and then losing ground again and again. As fighting has ravaged the city, civilians have suffered most. Western media has chosen to focus on Assad’s use of barrel bombs and the brutal methods of Daesh and other extremist Islamist groups, but western-backed “moderate” rebels are equally guilty of inhumane acts.

The Alawites, members of the Islamic sect to which Assad’s family belongs, have suffered terrible reprisals at the hands of both Daesh and western-backed moderates. Although barely reported in the West, such actions led the UN anti-genocide envoy to warn, as early as December 2012, of the very real risk of mass reprisals. Phrased in a way which puts the blame, unsurprisingly, at Assad’s door, Adama Dieng said: “I am deeply concerned that entire communities risk paying the price for crimes committed by the Syrian government”.

In the rural area of East Ghouta around Damascus, reprisals have borne many similarities to the treatment of Christian minorities and the downed Jordanian-fighter pilot. Although Alawite women and children were not burnt alive, they were reportedly locked in cages on rooftops in the hope of deterring both regime and Russian airstrikes. Back in Aleppo, rebels began their repression by posting dire messages thoughout the city: “Don’t send your children to school. If you do, we will get the backpack and you will get the coffin,” one read.

Whilst the use of barrel bombs and indiscriminate shelling of highly-populated regions undoubtedly deserves attention, the sole focus on the regime’s crimes draws attention away from atrocities of other factions. It also echoes the central goal of the West and its regional proxies: Assad must go. With this, the siege of Aleppo demonstrates western media bias clearer than almost any other example from the war in Syria.

As highlighted by Peter Oborne, in a brilliant piece from the ground in Aleppo, government-held areas of the city had been under siege by Islamist forces between 2012 and late last year. That was never reported. Now the tables have turned and the besiegers have become the besieged, it is reported as disastrous in the West.

This is where the catastrophic nature of Western policy on Syria, encouraged through secretive channels since at least 2006, is most evident. In Aleppo, Oborne reports being repeatedly asked why Britain is supporting terrorists. Those who ask this question have a point. It is no secret that Turkish and Saudi funding has been pouring into the hands of many opposition groups in Syria. These are groups who wish to destroy the tolerant culture of Aleppo and much of Assad’s Syria, bringing the region into line with their fundamentalist Wahhabi visions.

It is a question worth posing; why are we supporting groups with such draconian visions against a regime which has defended the rights of minorities. A regime under which women can walk alone, drive and pursue careers. A regime under which both Christians and Muslims may worship in peace and a broad, almost liberal, curriculum is taught in the schools.

Are we really fighting a war of values here, or is it yet another example of geopolitical posturing on the part of various interests?

Is Russia most likely to bring about peace?

As Aleppo is encircled by a combination of Assad’s forces and Russian airpower, it is Russia who are laying the groundwork for peace to take hold in Syria. That is, at least, according to ex-chairman of NATO’s Military Committee, Lieutenant General Harald Kujat.

In an interview with Passauer Neue Presse newspaper, he said:

The Russians have made the peace process [in Syria] possible…Neither the Americans nor the Europeans had any strategy for a peaceful Syria. Both weren’t prepared to be really involved. The Russians did it and opened a window for political solution.

Kujat emphasised the point that the Syrian military looked set to collapse entirely before direct Russian involvement restored their strength. Had this situation played out “(T)hen Syria would have collapsed, with IS capturing the country” , he said. It was Russian involvement then, which began to turn the tide in Syria.

The ex-NATO bigwig is not the only Western military expert to hold this view. Ex-chief of general staff of the British Army, General Lord Dannatt, told the BBC that Britain was backing the wrong side:

He added that although there may be an element of “my enemy’s enemy is my friend”, the West must stop “propping up the moderate opposition, which is not moderate at all”. His thoughts were echoed by former UK Ambassador to Syria, Peter Ford, who said:

[The West] has to allow the Syrian army backed by the Russians to deal with ISIS. It is a local problem that should be dealt with by the local governments.

Dannatt’s assertion that Russian strategy is working is plainly evident in the siege of Aleppo. As the encirclement is completed and the key supply lines to and from the Turkish border are cut, it is Assad’s Russian-backed forces who are on the advance. To complicate the situation further however, some Kurdish elements of the Syrian Democratic Forces now seem willing to switch allegiances in order to secure bargaining-chips in post-war Syria. It was the Kurdish YPG who cut off the final rebel supply road into Aleppo in overt collusion with Assad’s forces and Russian air power.

This development is a significant one. NATO member Turkey’s overarching aim in Syria is to destroy Kurdish elements as completely as possible and put an end to hopes of a Kurdish state along its border with Syria. We have seen that to achieve this, Erdogan’s regime is willing to go to extreme lengths. These include allowing arms, oil and men to flow across its border, greatly benefiting the efforts of Daesh amongst other Islamist groups. In addition, they have shelled Kurdish positions in Syria and infamously shot down a Russian jet.

As most Kurdish elements are also seen as an ally by the US, the situation grows ever more complex. Whilst US spokesmen have expressed concern over the Kurds latest shift, they admit they “are not on the ground to force anyone to do anything.” It is this position of the US-led coalition which makes Russian-backed forces the most likely to bring about peace. They are on the ground and in a position to directly influence events. As told by Lieutenant General Harald Kujat, to beat Daesh and bring about a political solution in Syria, “ground forces are required. The question is whether NATO really wants to step into this war.”

Whilst Western populations of NATO member-states are showing no appetite to send ground troops to another Middle Eastern war, Turkey, along with its Saudi Wahhabi allies have amassed such troops in what looks like a preparation for a ground invasion. It is time for the West to decide then, do we continue to fight on the side of foreign-backed extremist elements running the risk of a major multiplayer war, or swallow some pride and negotiate with those who look likely to prevail: namely Assad’s forces with Russian backing.

Join the Stop the War campaign.