Not satisfied with pushing junior doctors out, the Tories are attacking another profession - Canary 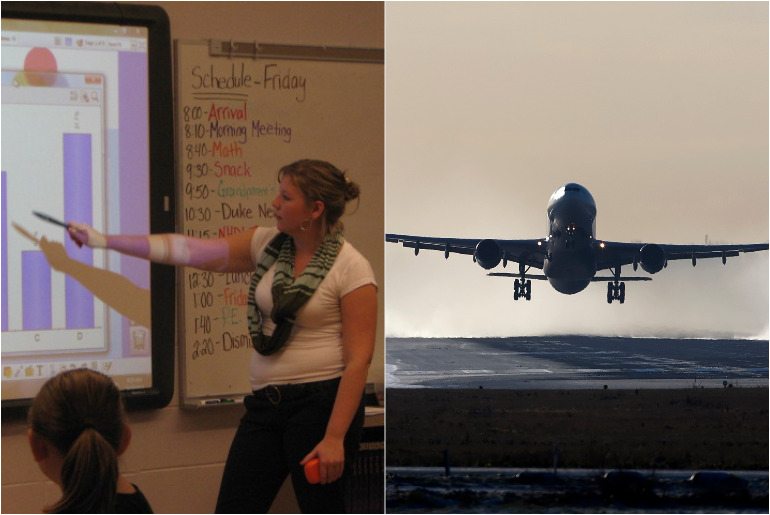 The junior doctors’ row has been making the headlines over the last few months, but recent comments from Michael Wilshaw, the Chief Inspector of Schools, have shown that Conservative party policies are also pushing teachers to leave Britain.

Wilshaw claimed that the UK now faces a “teacher brain drain” and is urging ministers in the Department for Education to consider implementing a policy of “golden handcuffs”. The idea is to effectively blackmail teachers who train in Britain to stay and work here for a “period of time” after they qualify, as a ‘thank you’ for their bursaries. Another profession to currently implement a similar policy is the Armed Forces.

There is little doubt the idea would encourage some teachers to stay and soften the effects in the short term. But the knock on teachers’ morale could be of much greater detriment to our education system in the long term.

Most new teachers today are in debt even before they begin their teaching training. A basic requirement to teach in Britain is an undergraduate degree; with fees of up to £9,000 per year. Not cheap. After which, teacher training is a necessity. For this, the government will provide potential teachers with bursaries of up to £30,000; but this is a figure few qualify for.

The minimum requirement to qualify for the basic rate bursaries is a 2:1 at undergraduate level, qualifying you to £3,000 to contribute to another course which, again, could cost up to £9,000. After all this training and debt, it would be very tempting to join the “brain drain” and move to sunnier climes to earn tax-free.

But there could be another way

Unsurprisingly, teachers have different ideas how to keep UK trained teachers in Britain. Most don’t rely on blackmail but the very simple logic of making UK-based jobs more attractive. This does not simply just mean more money, as the right would like us to believe in the case of junior doctors; although this would help. But better conditions, and less Ofsted interference.

It is a common misconception that teachers work much fewer hours than other professions, for example. Whilst the idea of 6 weeks off in the summer sounds nice and makes a great soundbite for those downplaying teachers grievances, it is deserved and not an entirely work-free break. There is planning for the next term to consider, for example. And then there is all the marking. The same factors debunk the claim teachers only have to work between 9.30am and 3.30pm.

Whilst the endless administrative work is also cited as a reason many leave, stress is one of the most common. From changing assessment and test conditions every time a new minister takes head of the Department for Education, to the constant threat of an unfavourable Ofsted report; upheaval of the system is a major source of stress. It is also the main reason 34% of teachers would not reccomend their chosen profession to their own child, and 41% wouldn’t recommend it to their best student.

Russel Hobby, general secretary of the National Association of Head Teachers (NAHT), echoed some of the typical grievances teachers hold in response to Wilshaw’s proposal:

Pay flexibilities do not work when schools have insufficient funds to use them; enforced pay freezes are making starting salaries uncompetitive. Excessive workload, poorly planned change and constant criticism drive out experienced teachers…We don’t need golden handcuffs to keep trained teachers in the UK. We just need to treat them with respect. It has the advantage of being cheaper, as well as being the right thing to do.

Some teachers leaders have endorsed a form of “golden handcuffs”, however. Leona Cruddas, director of policy at the Association of School and College Leaders, said:

Our view is that more needs to be done to incentivise teaching as a career. We would suggest that government undertakes to write off, over a period of time, the undergraduate tuition fees of students who become teachers, as long as they remain in the state system in this country during that period.

This is an idea which deserves more consideration and not only for teachers. Why do we charge so much for training courses which will benefit society as whole in the first place? As many teachers and doctors alike make perfectly clear, the motivation for entering such professions is rarely financial. Surely, we should reward those who dedicate their lives to making a difference to others in a civilised society.

Although such a policy would clearly run against every sinew of Tory austerity, it may be necessary to overcome the pull-factors dragging our most valued public servants around the world.

For a party who claims to want the best for Britain, you’d think this would be a no-brainer.