The left ARE electable, despite what the right-wing media would have you believe - Canary 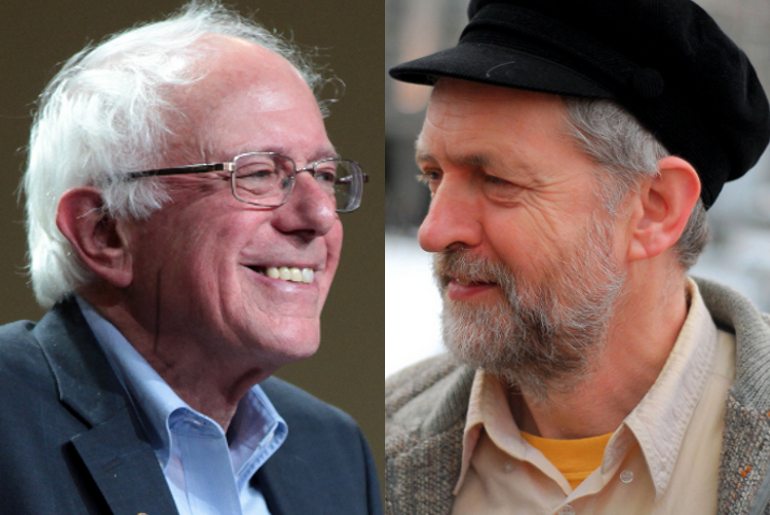 There is plenty wrong with the assumptions that underpin our political systems and debates, and this is being perfectly demonstrated at the moment by the bandying about of one word: ‘unelectable’.

Establishment politicians are clearly upset at the moment due to the rise of broadly socialist candidates. And so are their friends and lapdogs in the media. This is why the popular progressives are dismissed as ridiculous and a pointless waste of a vote whenever they speak about alternative economics, denounce hawkish militarism, or champion a system of mutual benefit for the majority.

Jeremy Corbyn is settling in as leader of the Labour party. This is after the leadership contest that Dan Hodges at The Telegraph knew Corbyn was “guaranteed not to win”. Bernie Sanders continues to make huge, and misreported, gains in the US. Even as one poll says this supposedly “unelectable” nominee is less likely to become US President than a Muslim candidate.

If these prophecies about left-wingers being doomed turn out to be correct, it will be in large part because media influence ensures they are fulfilled, not because these figures aren’t worthy of our consideration.

The concept of ‘electability’ is not meaningless in itself. Extreme ideas, by their very nature, will likely be rejected by the majority. But the establishment’s labelling of leaders like Corbyn and Sanders as ‘extreme’, and therefore unelectable, is blatantly incorrect.

One would be forgiven for believing that cutting welfare payments for the sick and dying was extreme, or that giving oneself a huge pay rise while insisting that you can’t afford one for public sector workers is extreme, or – heaven forbid – building a wall that stretches the entirety of the US-Mexican border. Yet these policies seem to have their supporters.

Rather than being extremists, Corbyn and Sanders are only guilty of refusing to loll around the centre-ground – which has actually been positioned on the right for many years. They could easily try and appear as inoffensive as possible – like the ‘potentially electable’ Ed Miliband and ‘shoo-in’ Hillary Clinton – who, if you remember correctly, sustained a significant lead over Barack Obama until the end of their race in 2008.

The Conservatives in Britain, meanwhile, were called unelectable for moving further to the right in order to keep a hold of potential UKIP voters; shortly before they were elected, of course. And don’t forget how, until recently, everyone assumed that the actually quite unwell Republican frontrunner Donald Trump was an ‘unelectable’ joke. Fewer people are laughing now.

Media coverage, or the use of certain terms to describe candidates and their framing of policies, is not the be-all and end-all in major elections. But it does play a huge part in influencing the public’s faith in not only individuals, but also in the process of voting itself.

However, the argument that Corbyn and Sanders’ decades-long electoral victories prove their ‘electability’ is not as solid as many progressives are hoping. Smaller, local elections are not indicative of national elections in such a straightforward way.

The argument that Corbyn can win simply because he did in Islington North for the last 8 elections, or 23 years, is only indicative of his electability within particular demographics. Similarly, Sanders has won 14 local and state elections since the early 80s (once by only ten votes). As such, he is the longest-serving independent candidate in congressional history. And he has triumphed several times with a landslide – but in Vermont, the fifth smallest and second-least populous state in the US.

These victories do show that, if left-wing candidates can communicate their policies for the majority effectively, they can win wide and lasting support among particular groups – and most significantly from groups like the “unheard third” of the UK electorate.

They don’t, however, mean that Conservative voters or the astronomically wealthy are magically going to help create a landslide victory for Corbyn if he remains leader until 2020. But there may indeed be a swing to the left among some. Those who haven’t been voting – primarily those disillusioned by decades of increasingly punishing economic inequality – may turn up to the polling stations. And young people, uninterested because of a lack of political education or disappointed by the constant breaking of promises, may suddenly feel they have something to vote for.

Left-wing candidates in the UK have four years to ramp up that momentum, and follow the ‘unelectable’ Sanders’ lead as he gains on Hillary in a race that is too close to call.

– Support The Canary so we can continue to challenge media lies.

– Write to your MP and ask them to hold the media accountable.

– Support the Media Reform Coalition, who are trying to do just that.