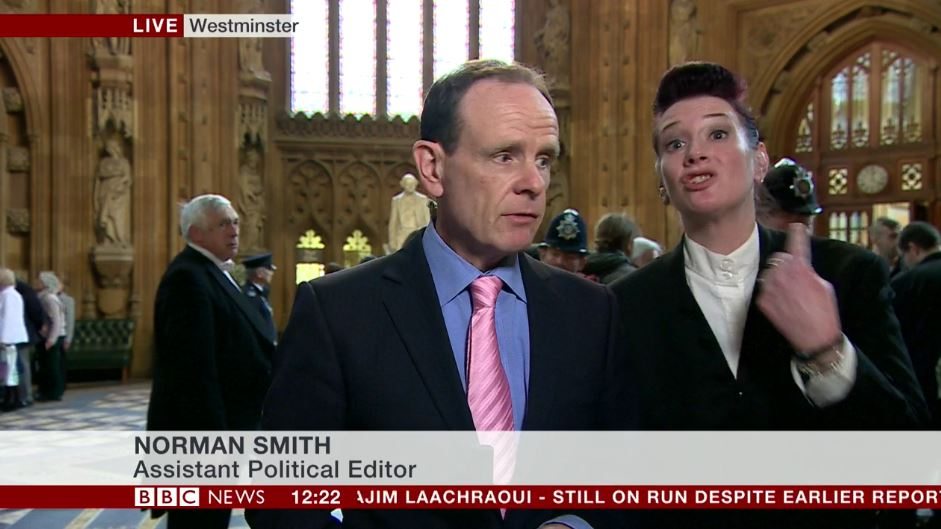 During PMQs on Wednesday morning, in a brash display of censorship, a Parliament steward halted a live BBC broadcast from the House of Commons as their correspondent tried to report a protest by disability charities.

Twenty minutes into Prime Minister’s Questions, the BBCs assistant political editor Norman Smith was in the central lobby of the chamber, and began to explain the shouting behind him to the anchor in the studio. A group of people had gathered outside the chamber to protest the latest round of disability cuts; this week’s political hot potato amongst the Tory leadership after Iain Duncan Smith’s resignation.

Almost immediately a Parliament steward made a beeline for him, and announced live on air

you can’t film in here at the moment…

Making the gesture for ‘cut’ across her throat, she addressed the camera operator and announced:

Sorry you’re going to have to stop… you can’t film with this going on in the background.

Smith asked pointedly “why?” She stated that it is

part of the rules and conditions of you filming in this area that you’re not allowed to film if there’s a protest going on behind you.

There are genuine security concerns about broadcasting from Westminster, and there are certain designated points from which broadcasters can work. Permission is also required for broadcasting, from Black Rod – the official responsible for Parliamentary security – prior to filming or photography.

The Guardian reported on its live political blog that the reason for this is that it encourages other citizens to “stage stunts of this kind”, and that Black Rod had today ordered the same of all reporters.

This decision about permission to film specifically during a protest in Parliament does not seem to appear in official legislation. The Canary spoke to The Guardian‘s politics blogger Andrew Sparrow, who said, “the rules regarding filming are written down, but not the thinking behind them.”

The most recent regulations accessible to the public about broadcasting are from 2007, and while they mention the need for permission they do not mention anything about not filming protests.

This is the latest display of media censorship and disdain for protest shown by this government. It’s also not the first time the BBC has been accused of bowing to pressure to accept skewed reportage.

Not all of this criticism is aimed at the BBC or at the media in general, and indeed the BBC have recently been accused of media blackouts that are, in fact, due to lack of interest rather than conspiracy. Government intervention in order to protect themselves from criticism – for example in the case of the revelations by the Guardian of government surveillance – has been a far more critical factor, a slice of which we’ve seen live in this instance.

Immediately, Norman Smith tweeted the incident. He clearly wasn’t happy, but the question of why he didn’t challenge the order remains. The BBC have been previously criticised for their cosiness with the government, especially now that the corporation is under threat of privatisation.

The willingness of the media and the government to display publicly their contempt for the public voice, and freedoms of speech, just reached a frightening peak.

Support the call for media reform

Write to your MP to complain about government censorship