As US Presidential candidates enter the last leg of the race, it just got real (TWEETS) - Canary 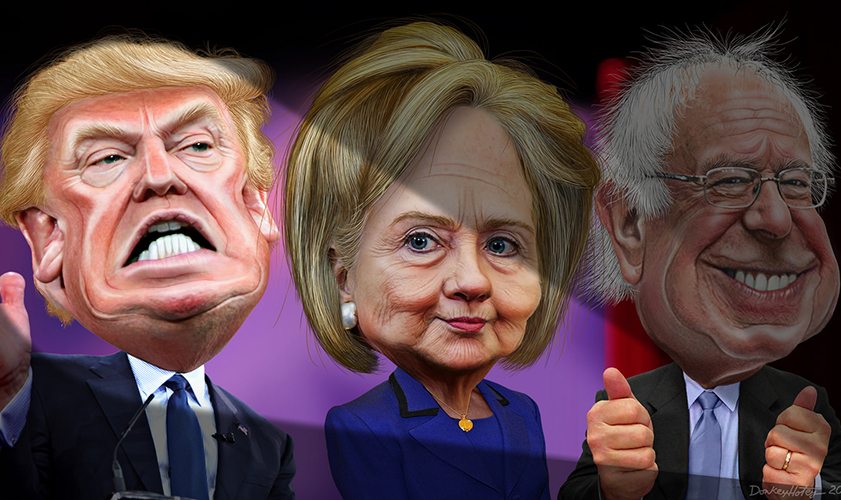 With only a few months to go until the nominees are chosen, the US presidential nomination race was sure to be hotting up anyway. But the pivotal events of the past week have ensured that supporters in all camps are biting their nails and shouting their slogans, with tremors of both fear and excitement.

The internet allows us all to enjoy the spectacle. Which is what it appears to be much of the time, with such… colourful characters involved. But let’s not forget the gravity of the decisions being made, and not only for the sake of 320 million Americans.

What do the polls say?

Well, many things. Real Clear Politics is a useful site, taking all the data and condensing it into user-friendly graphs. For example, as well as for the nominee races, they also have polls for which candidates would win were they to race for the Presidency: 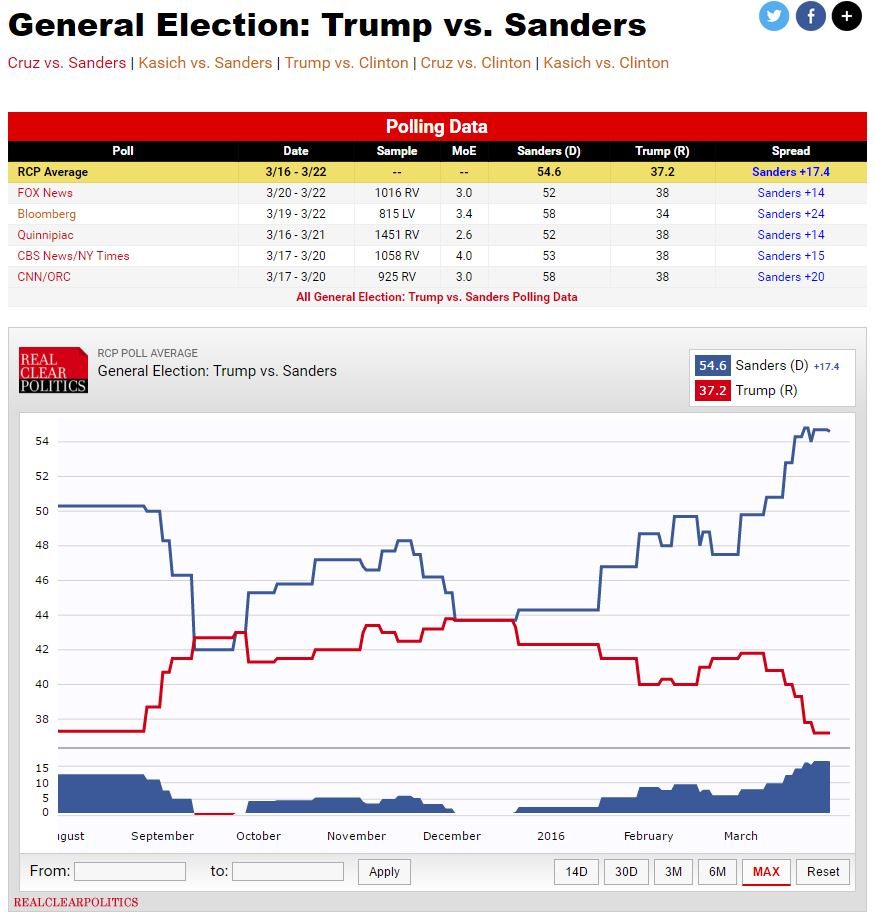 The above graph shows that, with all polls considered, if Bernie Sanders were to run against Donald Trump, he would win by quite some margin. A graph for Hillary Clinton vs Donald Trump predicts she would win too, but by fewer points.

It’s also important to bear in mind that polling data can be misleading (as we found out in our 2015 general election.) Nearly all public polls are based on randomly-dialled telephone calls, the results of which are adjusted to match the demographics of the adult population and remove those who aren’t registered to vote. However, ‘adult population’ doesn’t automatically equal ‘voters’, because very few people actually vote in presidential primaries. What’s more, US voter registration is notoriously complicated – and in some instances corrupted – and many are mistaken when they report themselves as registered to vote.

While Hillary Clinton and Donald Trump are currently thought to be way ahead in the Democratic and Republican races, any certainty of their victories remains hotly contested, for several reasons.

Didn’t the Bern just get felt?

Yes… sort of. On Easter weekend 2016, Bernie Sanders (loosely: America’s Corbyn) won an overwhelming victory in three Western states: Hawaii, Alaska and Washington. While this was a huge psychological boost for those who have been feelin’ the Bern for quite some time, most people are remaining pretty chill about it. (Because Bern is like burn… I won’t apologise.)

At the time of writing, Sanders is still way behind Clinton overall, but catching up to her in delegates. Delegates are individuals representing each state (roughly, but not exactly, by size and/or population), who cast the final votes at the party conventions in the summer, thereby deciding the Presidential nominee. In addition, superdelegates are delegates within the parties whose votes are weighted as heavily as thousands of individual voters. While they pledge support early on in the race, they can vote as they please at the party convention.

Clinton, who has been the frontrunner for the Democrats since the beginning, “swiftly and aggressively” got 469 superdelegates on board. Sanders currently has only 29. But the LA Times has reported that, as he slowly gains on Clinton, the new Sanders campaign plan is to convince a majority of these superdelegates to turn in his favour. This could swing the nomination for him, and isn’t as shady as it may seem. If public opinion was in favour of Sanders, it would be viewed as scandalous for superdelegates to vote against him.

Still, without massive wins, Sanders will struggle. But Hillary has bigger reasons to be wary of media attention.

After his recent ‘comeback’ in the west, Sanders invited Clinton for another debate ahead of the New York primary – a significant state they both have history with – but Clinton declined, saying she didn’t like his “tone”. Nonetheless, her camp is publicly dismissive of any possibility of losing.

“You should be willing to debate anytime, anywhere.” — @HillaryClinton in 2008.https://t.co/UruLT1afY3

The internet quickly employed its time-travel abilities (as it did last month over Clinton’s accusations that Sanders hadn’t supported her in healthcare) to make Clinton eat her words, and brought together its own negative tone for Clinton under the tag #ToneDownForWhat?

Are you kidding me @HillaryClinton? If you can't handle Sanders' "tone," good luck dealing with Trump or, I dunno, ISIS. #ToneDownForWhat

But while these lo-fi yet sensational battles continue, a controversy is re-emerging that will certainly make Clinton nervous. Writers at the Huffington Post are calling for Clinton to step down in Sanders’ favour, ahead of being interviewed by the FBI for potentially breaching national security. Prosecutors are currently deciding whether or not to bring criminal charges against Clinton for using her private, non-secure email server to handle secret documents while she was Secretary of State.

At the same time, the first poll putting Sanders ahead of Clinton in popularity among Democrats has emerged, after an increasing amount of controversies and inconsistencies in her political campaign.

Who the hell is John Kasich?

The current Republican frontrunners Donald Trump and Ted Cruz are all the mainstream media can talk about – unsurprisingly, due to Cruz‘s “crazy” and Trump’s childlike despotism. Their most recent public spat has been centred around insulting each others’ wives.

Kasich is very much the third wheel of the Republican race. A moderate conservative, he has refused to join in with the playground tactics and sardonic catcalling of his racemates, and has thus remained under-radar yet quietly popular enough to maintain an untarnished third position. On closer inspection, he’s a fascinating candidate. The youngest person ever elected to the Ohio Senate at 26 years old, one of his first acts was to refuse a pay rise. He once supported an all-out, very un-Republican ban on assault weapons, and is infamously a rock music fan, boasting a love of mosh-pits and a failure to once storm the stage at a Grateful Dead concert.

The Republican race began with no less than a whopping sixteen nominees. Jeb Bush, brother of George W., was thought to be the frontrunner this time last year. But due to his inability to fend off Trump’s rowdy tongue-poking and name-calling, he dropped out – after tweeting a photo of a gun with the caption ‘America’. Temporary second-favourite Ben Carson, famed neurosurgeon and hater of Obamacare (which he called “the worst thing since slavery“), soon did the same.

Kasich is the only Republican who has managed to weather the media circus of his bombastic opponents, though he remains far behind them in the polls.

Sure, memes are hilarious and Trump is terrifying, but why should I care?

Unlike many recent US and UK leadership races, we can’t criticise this one for having candidates who are all the same, that’s for sure. The neck-and-neck-and-neck-and-neck race remains as fascinating and bemusing as it is genuinely exciting.

Ultimately, the outcome of the race will almost certainly result in huge consequences for not only American, but global politics. No matter who becomes President, there could be hugely significant political changes.

This affects us too. Stay tuned.

– Support The Canary so we can keep bringing you fresh, free and fearless journalism.