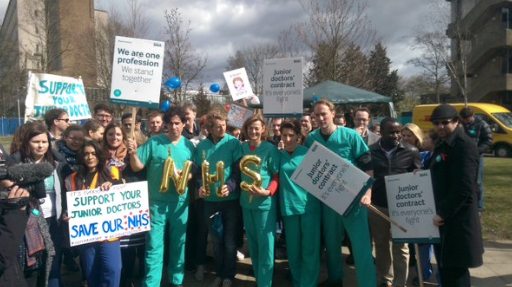 As junior doctors at London’s Northwick Park hospital continued their solid campaign of resistance against the imposition of dangerous new contracts, they were supported by some famous faces in their latest strike action.

Actors Stephen Mangan, Tamsin Greig, Oliver Chris, Julian Rhind-Tutt and Pippa Heywood, all of whom starred in Channel 4’s Green Wing (and some of whom played junior doctors themselves) made their public display of solidarity alongside their former ‘colleagues’.

5 of us #GreenWing ‘docs’ are going to Northwick Park Hospital (where we filmed the series) tomorrow to support the junior docs.

Green Wing actually featured no medical storylines at all; though an episodic sitcom it functioned often like a surrealist sketch comedy. Five of the cast reuniting for the strike action, however, shows that they are not ignorant of the pressures real doctors are currently facing.

Celebrities are often pilloried for contributing their thoughts, talents or bodies to political causes. Lately, both singer Charlotte Church and actor Michael Sheen, for example, have been particularly vocal about the failures of the government. Church has come under intense fire for this.

As though Moir herself does not earn a living by doing the same.

Celebrities lending their name, bodies, talents or whatever they choose do so as individuals participating in society. Whether or not they are hoping for attention for themselves or the cause, it tends to be out of their control considering they already have attention from the public no matter what they do.

It’s interesting to note that Church, as a young child star transitioning to adulthood, was treated terribly by the press. She was once blackmailed by Rupert Murdoch himself into singing at his wedding in exchange for favourable media treatment. Far less criticism of Michael Sheen, a middle aged man, can be found in the papers for expressing his political conviction. The criticism of celebrity ‘political PR’ is one that can be easily and lazily wielded, and is usually one embedded in sexism or racism, in an attempt to shut people up when you don’t like them.

The solidarity shown by the Green Wing cast through the simple act of turning up is a perfect example of a pointed gesture against political injustice. Campaigners often urgently need money, time and change, but these things can be hard to come by. An equally useful, and very easy and simple gift to give, is one of public support.

Write to your MP in support of the strike actions

Support the doctors’s union the BMA, and join a strike action.