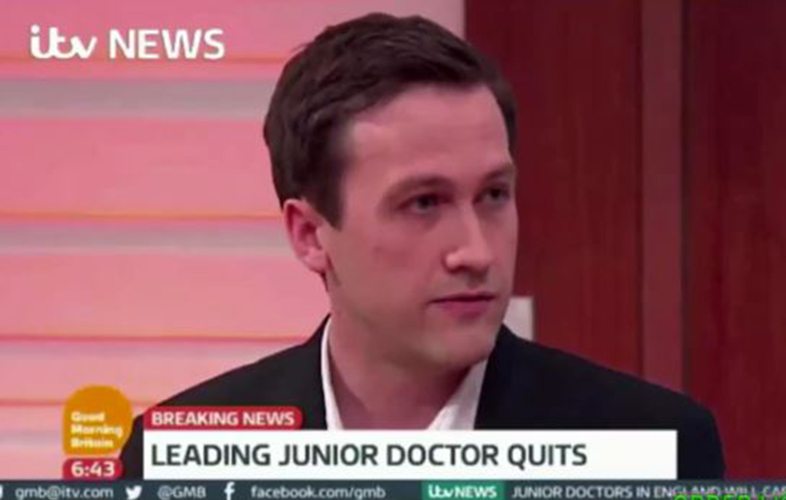 The junior doctors’ dispute is seeing a sharp increase in pressure. Not only political pressure on Health Secretary Jeremy Hunt, but personal pressure for the doctors who are fighting for a resolution. One doctor has demonstrated the seriousness of his situation and the rigidity of his position by resigning live on television.

Trainee doctor Ben White appeared on ITV’s Good Morning Britain telling presenters that doctors are “backed into a corner”. He took to the breakfast programme to discuss the doctors’ decision to enact a continuing programme of strikes. Reflecting both the seriousness of their collective situation and the weight of doctors’ individual decisions, White explained:

I’ve taken the decision, or I will do today, to resign as a trainee doctor to focus on a legal campaign, legal proceedings to fight the contract, to fight on behalf of patients and fight for the future of the NHS.

White’s announcement of his decision demonstrates three things. Firstly, the determination and strength of doctors’ opposition and their solidarity with each other in negotiating a new contract. Secondly, the doctors’ commitment to communicating their side of the dispute to the public, their patients, whether or not it is successfully heard. And thirdly, the fact that the personal decisions being made by doctors due to the imposition of the contract is now of such gravity, that not only are they willing to resign from posts they have worked years to attain, but also to embark on legal proceedings.

Five junior doctors are “seeking a high court judicial review alleging Hunt has no legal power to impose the contract.” White claims he has an “obligation to do this on behalf of his patients.” His declaration that he will take up a legal battle shows that he is not turning his back on the situation, but rather that he feels he can be more useful to the NHS by fighting for it in a legal capacity, rather than as a practising doctor.

White’s announcement comes the day before an unprecedented 48-hour mass walk-out by junior doctors, taking place on Tuesday 26th and Wednesday 27th April, which includes the cover of emergency care. This will be the first strike of its kind in the NHS’ 68-year history. The Guardian reports that hospitals are reshuffling staff from other departments and finalising their preparations ahead of the coming days:

Hospitals are asking patients to stay away from A&E during the walkouts, which will be staged from 8am to 5pm each day, unless it is an emergency and are bringing in consultants as cover. A total of 12,711 non-urgent operations and 112,856 outpatient appointments have been cancelled as part of determined efforts to ensure patients’ safety when there are far fewer doctors on duty than usual.

Jeremy Hunt is under pressure not only from the doctors’ actions themselves but also from those accusing him of ‘mudslinging‘, by claiming that junior doctors are “putting lives at risk”. The doctors, and their union the British Medical Association (BMA), are accusing Hunt and the government of doing the very same thing with the imposition of the contracts.

The BMA has confirmed that doctors are considering mass resignations to make similar points about the pressure they are under, and their unwillingness to give in to what they see as the government’s inability to govern the NHS in a safe way.

With Hunt refusing to return to the negotiating table, junior doctors show no sign of backing down and accepting what they have repeatedly said is an imposition of unsafe working conditions for doctors, and a risk to the lives of patients, and to the functioning and future of the NHS as an institution.