VICE, please stop pretending you're progressive while throwing your staff under the bus - The Canary 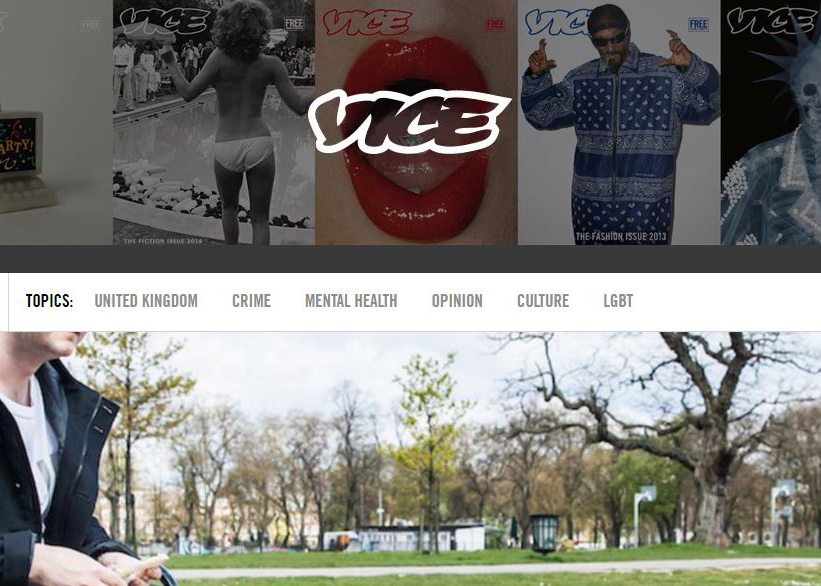 Staff at digital journalism company VICE UK have been told by bosses that their attempts to unionise with the National Union of Journalists (NUJ) will not be recognised. Instead, they have been “offered the chance to set up an internal staff council”.

We enjoy working at Vice. We appreciate our creative freedom. We also believe organising our workplace is the best way to keep pushing journalistic boundaries while allowing all staff to share in the success of the company.

In response, VICE UK just corporate-spoke yet again about how progressive they are, because they offer:

a dynamic and flexible working culture and giving a range of benefits to our staff including company equity, competitive salaries, a Vice pension scheme, enhanced maternity pay and life insurance.

Originally born as a ‘punk magazine’ in mid-90s Montreal, VICE is consistently described as the ‘counter-cultural‘, ‘hip‘, and primary media source for ‘millenials’. It’s relentlessly framed as cool, edgy media for edgy, cool people – hell, the company describes itself on Twitter as “the definitive guide to enlightening information”. (It could be ironic though. Who knows anymore.)

Considering it is one of the few media companies making any real money – expanding rather than contracting in the media’s tenuous landscape of transition – it’s frequently also touted as, naturally, then, ‘the future of media‘. And that making-a-whole-lot-of-money thing is key to a wider conflict.

VICE UK’s union-busting does not sit right with the company’s supposedly counter-cultural, supposedly ‘anti-establishment’ image. It certainly does not sit right with its punk roots. And other activities it’s engaged in haven’t sat right with many, for a while now. Its framing as oppositional is just that: framing, and comes largely from other people’s assumptions (though led by subtle PR on VICE’s part.) CEO and founder Shane Smith is candid about becoming a media plutocrat, and about his partnership with the biggest media conglomerates.

VICE’s significant deviation from the old, established and entrenched capitalist company is that it’s a new, good-lookin’ one (market translation: on-brand).

Like all arguments about capitalism, there’s plenty to be said on both sides. (Such as to note that journalists at the US VICE offices are unionised.) VICE UK has some great work, and its approach to content can be, and has been, innovative. The mismatch of ideas and values comes with translating that genuine stylistic innovation into an assumption of cultural or economic innovation.

In the 1920s, psychologists studying what made workers more productive found that:

monetary incentives and good working conditions are generally less important in improving employee productivity than meeting employees’ need and desire to belong to a group and be included in decision making and work.

The feeling amongst labour bosses that unionising workers threatened their capital and their power led them to the ‘human relations school‘ approach. Making workers feel powerful and valued without necessarily giving them the power, and ability to negotiate their own value, that a union would was key. Bosses co-opted the idea of unionisation into the ‘acceptable’ boundaries of the workplace by allowing, say, an ‘internal staff council’ that is permitted by, and therefore limited by the chosen boundaries of, the organisation.

VICE’s approach to its UK workers’ attempt to unionise follows the exact same approach employed by early capitalists like the Rockefellers. John D. Rockefeller in fact worked closely with Elton Mayo, the psychologist who’s credited with developing the human relations school – which he outlined in the questionably titled “Human Problems“.

This is unsurprising since, as Smith has openly stated, it is VICE’s intention to become a leading, global (market translation: relentlessly capitalist) media brand. The company is only “superficially opposed to the entrenched corporate power structure” (according to unionised staff at Gawker, which has a different but equally fascinating approach to digital media monetisation). Now that Rupert Murdoch’s 20th Century Fox has a 5% stake in the company, and Disney owns nearly a fifth, the company is swimming in multinational financing.

This venture capitalist input has indeed increased VICE’s abilities, reach and ‘success’. But at what cost? Similarly to (climate change denier) Rupert Murdoch’s takeover of National Geographic, the questions arising from these issues represent an as-yet-unanswerable tension between the financing, survival, and ethical practices of the media industry.

How can independent media survive, be innovative, and successful? Can it do any or all of these? Even Noam Chomsky has weighed in on the debate on millennials’ favourite media, claiming that Buzzfeed and VICE’s reliance on native advertising distorts realities in favour of the elite, impacting journalistic freedom. You know it’s bad when Chomsky is telling you to stop manufacturing consent, considering he took time out of his busy activist and professorial schedule at MIT to make a renowned three-hour documentary about it.

Is VICE UK dynamic, flexible and competitive? Certainly. Enlightened? Not so much.