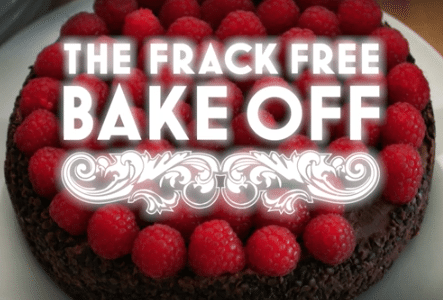 Actors (and sisters) Emma and Sophie Thompson have released an episode of ‘Frack-Free Bake Off’, after breaking a court injunction to film the BBC parody on a controversial UK fracking site. The spoof spin-off is a protest against the potential fracking of land in Lancashire, which the Thompsons, Greenpeace, and fellow protesters briefly occupied before being confronted by the landowner and police.

Police appeared to let the protest go ahead, however, as seen in the videos released throughout the day.

The land is leased to fracking company Cuadrilla, whose drilling license has been rejected by Lancashire County Council after opposition from locals. The company are appealing the case.

We will not share your information with third parties. Please see our Privacy Policy for information.
Previous work by Cuadrilla was halted due to minor earthquakes caused by their activity. Once the “moratorium” was lifted, the company immediately put in applications for further fracking licenses. Despite the proven risks to the environment and human health, planning officers have said:

they were satisfied with Cuadrilla’s plans for drilling and fracking and also with measures relating to air quality, greenhouse gas emissions, earthquakes, water use and visual aspects.

The Prime Minister controversially pushed licenses for fracking through Parliament shortly before the House of Commons’ Christmas break, drawing criticism from those – including Emma Thompson – who accuse him of “slyly” pushing the plans through without a Commons vote, at a time “when no one was looking” and the public are generally stressed and otherwise occupied.
The Thompsons have released a series of videos on the subject including one concerning their “cunning plans” earlier in the week, giving a taster (sorry) for what they might be.
The Lancashire case has proven particularly controversial, since Secretary of State for Communities and Local Government Greg Clark somewhat ironically enforced a top-down approach on the community and local government. The minister’s office said that he “would have the final say on controversial plans for fracking in Lancashire whatever the recommendation of a local planning inspector” because of the “importance of the schemes”.
Whether it’s the economic gain from fracking for gas, or the protection of the environment from the devastation of fracking for gas, that the government deems so important was not specified.

The landowner made his support of the dangerous and pollutant work going ahead on his land, with his response to the protest:

The role of humour in protest is an important one, as discussed by bell hooks and Hari Kondabolu in their recent on-stage conversation on comedy and politics. As hooks reminds us, comedy is integral to intervention, to engagement, and for helping people to heal. She declares that within that it is paramount to maintain integrity, respect and vision. So in other words, we should totally take the piss while fighting to protect the health of the British people and our countryside.

Write to your MP demanding that fracking licenses be overturned.

Email Greg Clark about the Lancashire appeal at [email protected]