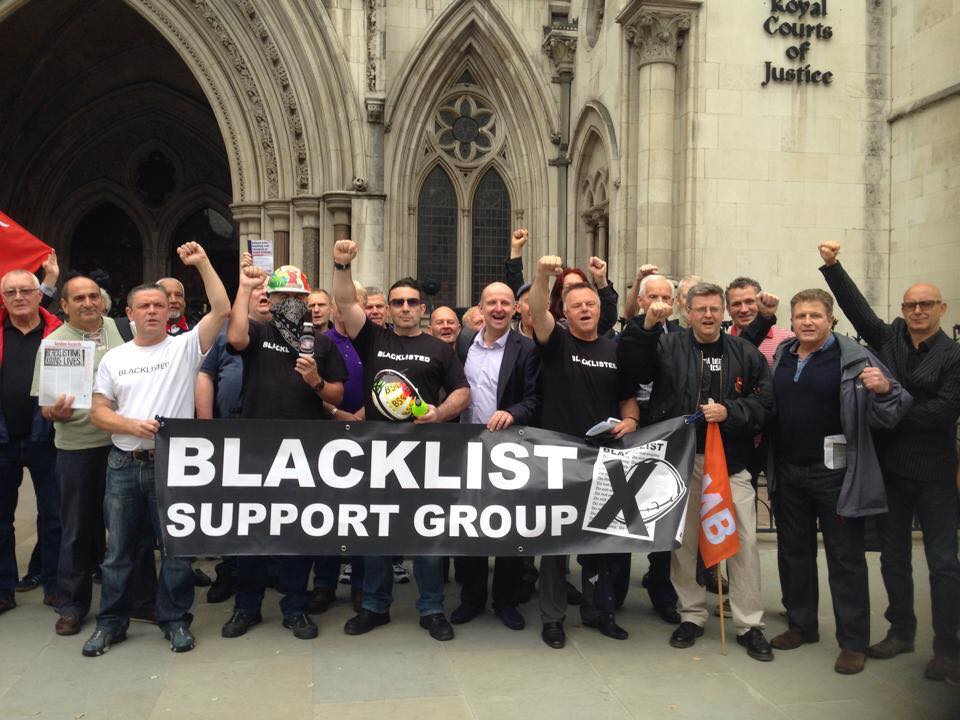 Blacklisted workers have been celebrating a major victory today after construction companies finally agreed to pay £10 million in compensation, and issue an apology in the High Court.

The seven-year battle began following a raid by the Information Commissioner’s Office on the Consulting Association which revealed a secret database kept on thousands of construction workers. Information on the files included names, national insurance numbers, and comments on involvement in unions -“ex-shop steward, definite problems”, or political association – “wears anti-Nazi League badges and insignia”. Many blacklisted workers were labelled as troublemakers for raising health and safety concerns on the sites where they worked.

3,213 people were placed on the list which was utilised by 44 construction companies including Balfour Beatty, Laing O’Rorke and Sir Robert McAlpine. Once on the blacklist, workers were either unable to find employment, or once employed were quickly dismissed. The consequences were devastating, often leading to long-term unemployment and ill health. One blacklisted worker, Chris Clarke, described the impact in the book Blacklisted – The Secret War Between Big Business and Union Activists:

My health collapsed and I nearly died in 2005 from an arterial fibrilliation attack, when your heart goes out of rhythm and speeds up dramatically. In 2008, it was touch and go, I nearly drowned in my own blood when a blood clot stopped the flow of blood to and from my lungs. I believe the blacklisting played a significant part in my ongoing illnesses. Blacklisting has severely damaged my health, damaged my relationships and damaged my everyday life.

According to the GMB, one of the unions supporting the legal case, these settlements will mean that the total payouts to those on the blacklist will total £75 million. However, this payout has only come through determined and dedicated campaigning by those affected. Dave Smith, secretary of the Blacklist Support Group commented:

Despite all of the denials and attempts to cover up their secret conspiracy, the largest multinationals in the construction sector have been forced to to pay out millions in compensation. Make no mistake, the High Court action is a historic victory for the trade union movement against the vicious face of free market capitalism.

However, whilst workers welcomed the payout, some also felt they were forced into a position where they had no choice other than to accept the compensation. One of the claimants, Graham Bowker, said he felt “blackmailed” into accepting the offer after having been “threatened with court costs” had the case continued. Bowker, who had to change industries after being blacklisted, said the payouts were “good news” but he would “have happily gone to court” if it hadn’t been for the threat of costs.

Another construction worker, John Bryan, who was put on the blacklist in 1979 struggled to find work whilst trying to support two young children. He said he was “stunned that after 24 years my blacklist record still existed and that I was still on it”, but that “apart from the anger, I felt justified and that I had not imagined it. I could show it to friends and relatives and they would see I had not been making it up. That I had wanted to work”. He also has “mixed feelings” about the result:

It is justice that I never thought I would ever see. I am sorry I will not get my day in court, I am sorry that the Captains of this Industry will not get cross examined under oath. I am also sad that a lot of good men more principled than myself have not lived to see this moment. I am glad that the Bosses know that when they carry out blacklisting in the future there will be consequences if they are court.

Smith also stated that the fight was far from over:

These fat cats and their friends in the police took food off of our children’s table, causing years of family hardship. We take this personally. A few quid and a mealy mouthed apology is a long way from justice. We intend to continue our fight to expose those who orchestrated and colluded with blacklisting. In any civilized society, the wretches would be in jail by now.

Indeed, there is still the outstanding issue of undercover police officers spying and reporting on union activists, with accusations of collusion between the police and the Consulting Association. Undercover officer, Mark Jenner, who was part of the Special Demonstrations Squad infiltrated both trade unions and anti-racism campaigns.

Campaigners from the Blacklist Support Group will be represented at the Undercover Policing Inquiry, where they hope to start getting to the bottom of why they were spied on, and how much information was passed on by the police to private companies.

As Smith says, the scandal is not going to disappear anytime soon:

The blacklist firms might have hoped that by buying their way out of a show trial, that the scandal that has disgraced an entire industry will go away: it won’t. Blacklisting is a human rights conspiracy against trade unionism by big business and shady anti-democratic political policing units within the British state.

This is yet another case where it has taken those affected years of dedicated campaigning to hold the powerful to account. The apology and compensation is a massive victory for those involved, but having fought for so long, it is disappointing that the issues will not be heard in court, and those responsible not held fully culpable. There are still many unanswered questions, and the Undercover Policing Inquiry will at least start to unearth the depth of the collusion by the police with private industry. Moreover, it is hoped those involved in preventing people from working and causing years of misery for them and their families will be held to account.