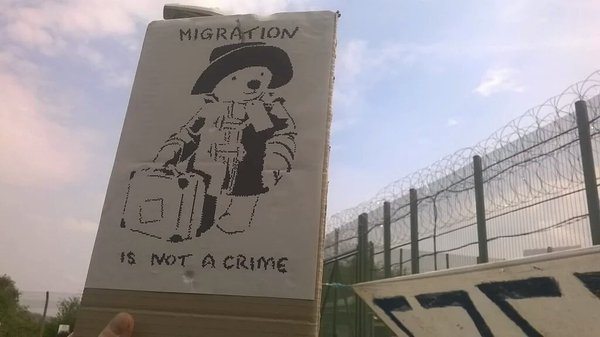 On 7 May, protests erupted on both sides of the fence at detention centres around the UK. 190 prisoners conducted hunger strikes at Harmondsworth detention centre, a further 50 occupied the courtyard. A prisoner also attempted suicide.

Campaigners held protests outside 10 detention centres up and down the UK as well as solidarity protests in the Netherlands, Iceland, Belgium, France and Sweden.

Around 32,000 people are detained indefinitely in the UK despite having committed no crime. They experience a maze-like asylum process, a lack of adequate medical care and little mental health provision.

We all will continue this protest, but we feel hopeless […] because inside the center we can’t trust any of the staff members, their behavior is like they are kings and we are slaves. […] We are struggling with the nonhuman behavior of staff. […] There are so many detainees here for more than 10 months. Day by day, everyone is becoming mentally ill.

Due to the stress of imprisonment with no indication of when they may be able to leave, the traumatic events in their home countries that may have prompted them to seek asylum, or pre-existing mental health issues, the number of suicide attempts amongst UK asylum prisoners is worryingly high.

"I saw women who had been in Yarl's Wood so long they were broken" – Carol, released in 2012: https://t.co/kipcb8IuPr #Time4aTimeLimit

A Freedom of Information request shows that in 2015 there were 393 suicide attempts, up by 11% on the previous year. That amounts to more than one suicide attempt for each day of the year.

Half of women #asylum seekers in UK contemplated suicide while detained. See this new report by @4refugeewomen http://t.co/0IfWnOYtx1?

A spokeswoman for the charity Medical Justice which campaigns on behalf of prisoners said:

We find that many detainees have serious mental health issues, having suffered torture in the home countries and then faced with the trauma of indeterminate detention. The increasing numbers of detainees who self-harm or attempt suicide is very concerning and the health care provided in immigration removal centers is not adequate to deal with the levels of mental distress

One of Saturday’s protesters, the mother of a former prisoner, said:

He was abused quite a lot. Nobody stood up for him or anything like that. We are here today because we think that the way our asylum-seekers are treated is inhumane, is wrong and is degrading.

The treatment of women, particularly pregnant women, has been a source of anger among campaigners and the families of prisoners.

I never had any happy moments of being pregnant." The story of a pregnant woman detained in Yarl's Wood: https://t.co/xiiy6CX1tp #setherfree

We will keep fighting until every one is set free. No human being deserves to be in that kind of situation.

The detention industry is contracted out to private corporations, the largest of which is G4S, who have been mired in scandal after scandal. A lot of money is being made off the back of suffering and a disturbing disregard for human rights and freedoms. If the reports coming out of these detention centres were emerging from Russia or Iran then no doubt the hypocrites in power would be lining up to condemn them.