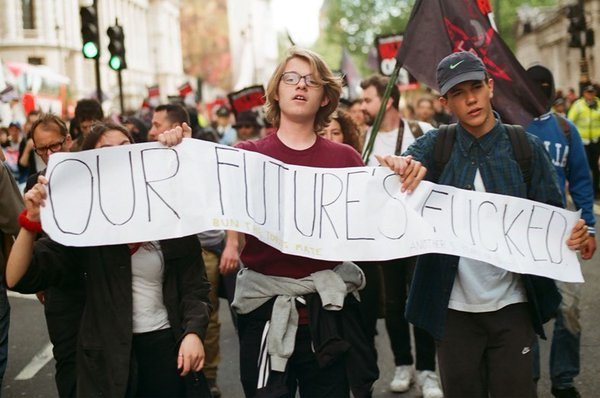 A government white paper detailing plans to allow elite universities to raise tuition fees has just been released, and it has students up in arms.

The ‘Success as a Knowledge Economy’ paper is part of a package of reforms to higher education, justified in terms of improving teaching quality, called the Teaching Excellence Framework (TEF). However, critics are calling it  a ‘Trojan Horse’ due to a raft of measures that open up universities to for-profit organisations, who stand to make a killing off the backs of students.

Some of the changes the white paper stipulates, to come into force 2018:

Is this about competition, choice and efficiency or is it about pursuing the opening up of higher education so big business can more easily profit from it?

Students will understandably be outraged at any suggestion universities could be allowed to put fees up even higher in order to improve teaching quality. It was only four years ago tuition fees were trebled and students now face debts up to £53,000 when they graduate,

In fact, students in England face the highest fees anywhere in the English-speaking world. Many European countries offer free higher education including Norway and Germany.

In November 2010, students protested the tripling of tuition fees from £3,000 to £9,000 by utterly trashing the Tory party headquarters in Millbank tower. Since then the anger has not subsided.

4 years ago I went to protest at Millbank tower. Today lets make sure that our generation never has to again #GE2015 pic.twitter.com/S4C02PeUgP

Partly to blame was the fact that Liberal Democrat leader Nick Clegg had garnered votes from young people with achingly sincere promises to not raise tuition fees, only to leap into bed with the Tories allowing the unprecedented hike in the cost of them.

If the following letter is real, then he’s not the only the only one to ‘change his mind’  in recent years.

This letter from 2003 is circulating, is it real?! George Osborne for free education. pic.twitter.com/x90JthKW4v

Successive rounds of dishonesty, disregard and outright dismissal by politicians has led to a generation who struggle economically and are disillusioned with conventional politics.

RT if you back Jeremy Corbyn's plan to scrap tuition fees and restore grants. pic.twitter.com/CExKCazxEj

Talented and motivated students come from all backgrounds. For many from lower income families, education is the only route out of poverty. Those who have fought hard to achieve the grades necessary for a spot at the top universities, despite not having the privileges of their more wealthy peers, do not then need the added difficulties of ever-increasing debt.

Students in London are already protesting about rent hikes in some universities and a cost of living that far exceeds what they can afford.

To add further obstacles is the last nail in the coffin of the notion that England is a meritocratic society where young people can build a future that matches their ability. With this unfair, discriminatory, exploitative white paper, the already huge rifts society are set to widen.

–Join the National Campaign Against Fees and cuts.

–Write to your MP demanding they support the elimination of tuition fees.