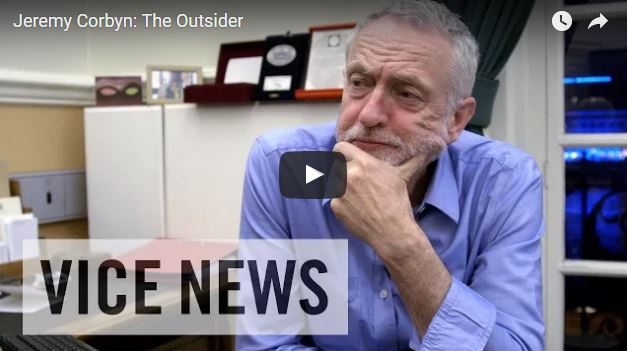 VICE News has released an observational documentary about Jeremy Corbyn and his inner circle, filmed in the weeks leading up to the May council elections. Topics covered include media coverage of Corbyn since his election as leader, the divide in the Labour Party, and the antisemitism row surrounding Ken Livingstone.

The video itself reads as an A-B-C guide to the Labour leader – it tells us almost nothing we don’t already know. At first, you’d be forgiven for thinking it was made for a US audience. However, one particular piece of information does stand out: the Blairite MPs waiting for an opportunity to oust Corbyn aren’t alone – there is also a mole in the inner circle of the Corbyn camp.

According to Corbyn’s strategy and communications director Seumas Milne, the struggle for parliamentary Labour Party unity goes right to the top. In an aside to Ben Ferguson of VICE News, Milne reveals that Corbyn’s pre-written lines for Prime Minister’s Questions are often leaked to the government ahead of time. This gives Cameron a significant advantage in preparing for the supposedly spontaneous debate and in influencing public opinion of the leaders’ respective capabilities under pressure.

Milne calls the leaks “very annoying”, claiming that they “happen about a third of the time”.

Other than this revelation, the film itself wasn’t even fifty shades of dull. VICE’s attempt to create tension consists of sluggishly probing Corbyn with a passively-negative slant on the difficulties of leading the party, and asking him questions without follow-up about subjects that the entire British media has already moved on from. Sporting the signature greyscale colour filter of VICE UK branding, VICE’s approach is in large part to blame for how dull Corbyn, and politics itself, appeared. Ferguson might as well have just tweeted that he reckons Corbyn is a bit pants and left it at that; since VICE documentaries are generally quite interesting, it would have been far more in-keeping with house-style.

Caustic leftist writer Will Self has penned an accompanying critique of Corbyn’s documentary debut for VICE, and rightly chastises him for holding back on significant opportunities to assail the Conservatives which they continue to present on a silver platter.

Milne is visibly pissed off when Corbyn decides against his approach to addressing the resignation of Ian Duncan-Smith after Osborne’s ‘unfair’ budget. Corbyn, instead, focused his critique of the Conservatives that day on their response to refugees, foregoing the opportunity to call them out on their own bombshell of disunity. Supporters of Corbyn, however behind his ‘new politics’ and ‘different way of doing things’, will certainly be frustrated at his reluctance to meet the adversarial tactics of his opposition even just a little bit.

Self sums up the anger of seeing Corbyn so reticent. However, it appears to be his team and the documentary itself that solidify that reticence. Let’s not fool ourselves that Corbyn suddenly disproves Great Man Theory; his team, the framing and lack of interrogation of anything other than Corbyn as a personality-or-not by VICE, the media treatment that swings between sour and non-existent, and the lack of unity not only in the party but also generally on the left, are all as significant as he himself is. And they’re all interacting with the failure of a Corbyn cultism which he clearly does not care to promote.

Yes, he needs to up his game and be wildly sharper and yes, he could be a better figurehead, with some media training – but the carbon copy politician look did no favours for Labour last time round. Self’s not the only one who wishes Corbyn was a bit more Bernie. Self voted for Labour in the 2015 general election, citing himself as a champagne socialist hoping for “a genuinely egalitarian society”. Considering that Corbyn’s politics are (seemingly) far more closely aligned with Self’s than Miliband’s, it’s a shame that he didn’t use his talent for diatribe to write an Encouraging Guide to Better Ripping Opponents a New One, rather than a slating of the man as “pathetic” and “clueless”, ignoring the fact it’s quite a bit more complicated than that. Corbyn’s slightly reluctant performance may well have been ‘bathetic’, but it’s not enough to take his acerbic, or VICE’s listless, word for it. If we are to avoid another Blair, the left needs to get some unity, quick.

Many are opportunistically quoting Corbyn as ‘not a personality’. But fewer are discussing what he said in full, which gives away far more about him as a politician than the easily jumpable and obvious phrase in the middle. After admitting that it’s odd to be signing photographs of himself, and joking that he’ll next be signing apples from his allotment, he states:

Corbyn isn’t interested in elevating himself to face-on-a-t-shirt status. He wants to create the open-door, genuinely egalitarian society that Self described, and that he was elected to vie for. If the left is to win in 2020, it needs to marry healthy examination and critique with a forward-thinking, forward-moving and encouraging approach. Ripping each other apart more than they already have isn’t going to help, and neither are bland, sedate attempts at interrogating someone on their lack of carbon-copy politics.

If you have a Labour MP, write to them about what you want from the party.