The Sun accuses the BBC of racism, forgetting it has the exact same policy - Canary 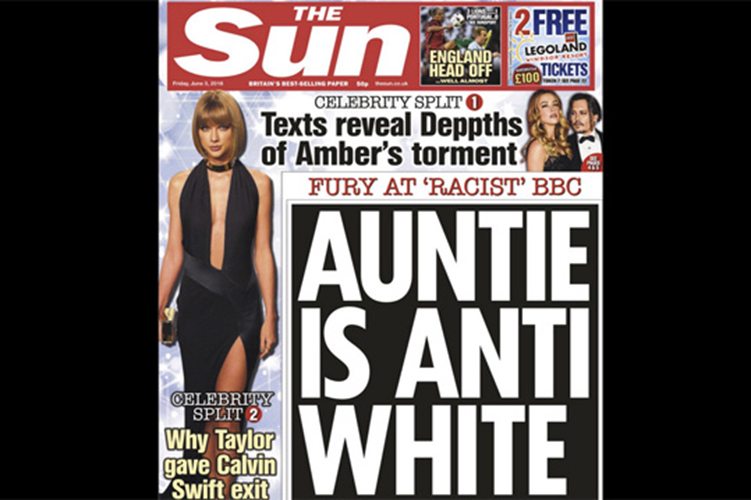 The Sun’s headline on 3 June outlined their “fury at ‘racist’ BBC” for implementing a diversity scheme that ensured black and ethnic minority candidates were given fair access to training at the corporation.  Similarly, on 6 June the Sun ran an article complaining that the BBC had advertised a job for an ethnically diverse member of The One Show team. According to the Sun, this proved the BBC were anti-white, a hysterical claim in itself. But even more so when you consider that it’s the same kind of scheme that The Sun has implemented in its own newsroom.

The Sun made the claim that the BBC was denying white people from applying for jobs, but the BBC corrected them. These schemes were for training rather than jobs, and were also aimed at other under-represented groups such as disabled people in an effort to fully represent all demographics in Britain. The full extent of The Sun’s hypocrisy was then revealed by the BBC who, in defending itself, linked to a recent article from The Sun that criticised the BBC for “failing in its duty to reflect modern Britain”. An article which has since been deleted.

Political Scrapbook reported that the British National Party (BNP) was actually trying to recruit new members based on the Sun’s story. This shows the way that distorted and prejudiced news reporting can skew people’s views of each other, of the true nature of power and society, and fuel discord. The Sun has been implicated in exacerbating racial discord before, quite apart from all of the many controversies they’ve been embroiled in over the years. But have clearly not learned from their glaring mistakes.

Ultimately, they are not mistakes at all. They are indications that, under the reign of Rupert Murdoch, The Sun maintains a systematic failure to perform journalism to basic ethical standards in favour of shocking people into buying their paper. News of the World was closed, and Murdoch’s employees jailed, for this very reason. The Sun is no better.

Watch The Fourth Estate, an independent documentary about the political economy of the media.

Support The Canary and other independent media outlets to continue holding power to account.