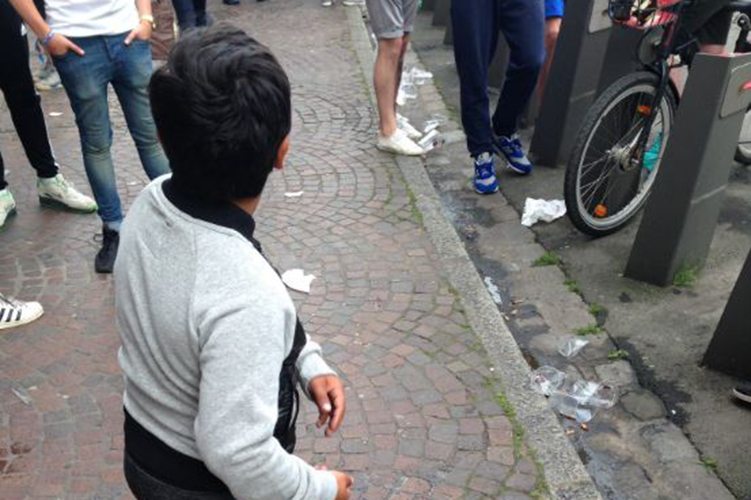 Alongside the headline stories of violence in the streets, and orchestrated clashes between British football fanboys and Russian ‘ultras’ and/or ‘hardcores’, there are smaller stories of violence by English visitors to the Euros. Live tweeting late on the 15 June, Financial Times correspondent Michael Stothard shared a photo from the streets of Lille, reporting that a group of British football fans bribed a 7-year-old boy begging for money to down a bottle of beer in exchange for coins.

England fans in Lille just got begging 7 year old to down a whole beer in exchange for some coins. #EURO2016 pic.twitter.com/XeaeaSzb3G

Of three stock responses by fellow Twitter users, the first was that of being sickened by the act. The two that followed were outrage at all fans being ‘tarred with the same brush’, and that, as a witness, Stothard should have intervened. A glaringly absent response was – why do people do this sh*t?

Absent, probably, because there is no catch-all explanation. It’s a complex question with an answer informed by both vast cultural, and pin-pointedly individual, histories. Ultimately, here comes imperialist culture, drinking culture, masculine culture, school playground culture all at once. Call that illustrious combo ‘British culture’ if you want, but attempting to lock it down to who and what is responsible, other than the individuals who coerced a needy child into drugging himself, is inevitably going to be reductive however tempting it may be.

What it certainly is, is abuse. Abuse by those exercising what limited power they have over someone whose power they know to be far more limited. And it’s abuse whether they register it consciously or not.

Psychological and sociological studies have been written on ‘football hooliganism’, including those which implicate the response by the state and the media in perpetuating the fractures in society which play a part in generating ‘football violence’ in the first place. Really, this is one instance of violence that is far more commonplace and less spectacular than some men skipping around a town they have no interest in and fighting with other men. It’s closer to a mindset of colonial mimicry or schoolyard bullying than it is to ‘hooliganism’.

Sense these England fans don't like Russians (who are about to pour into the same city centre) pic.twitter.com/Ihwh5Y1s4h

Buried under all the shouting and the bravado, the willy waving and the police inevitably shooting teargas in response, are real acts of abuse that have nothing to do with congregating sports fans or lads on tour, other than a related mob mentality that the ‘bystander intervention’ movement – still clearly fighting bystander apathy – seeks to combat.

Drinking culture can’t be separated from the act of bribing a child into drinking. Yet, again, this is no neat answer. It’s simply one layer of a picture in which societies fail to recognise abusive structures and behaviours. Stothard reports that places in the centre of Lille are ‘going dry’. Whether or not this will make a true difference to increasing violence both large and small is, again, too much part of a wider picture to rely on.

Read other articles from The Canary about violence.

Support independent media at The Canary to help us continue reporting on international events.