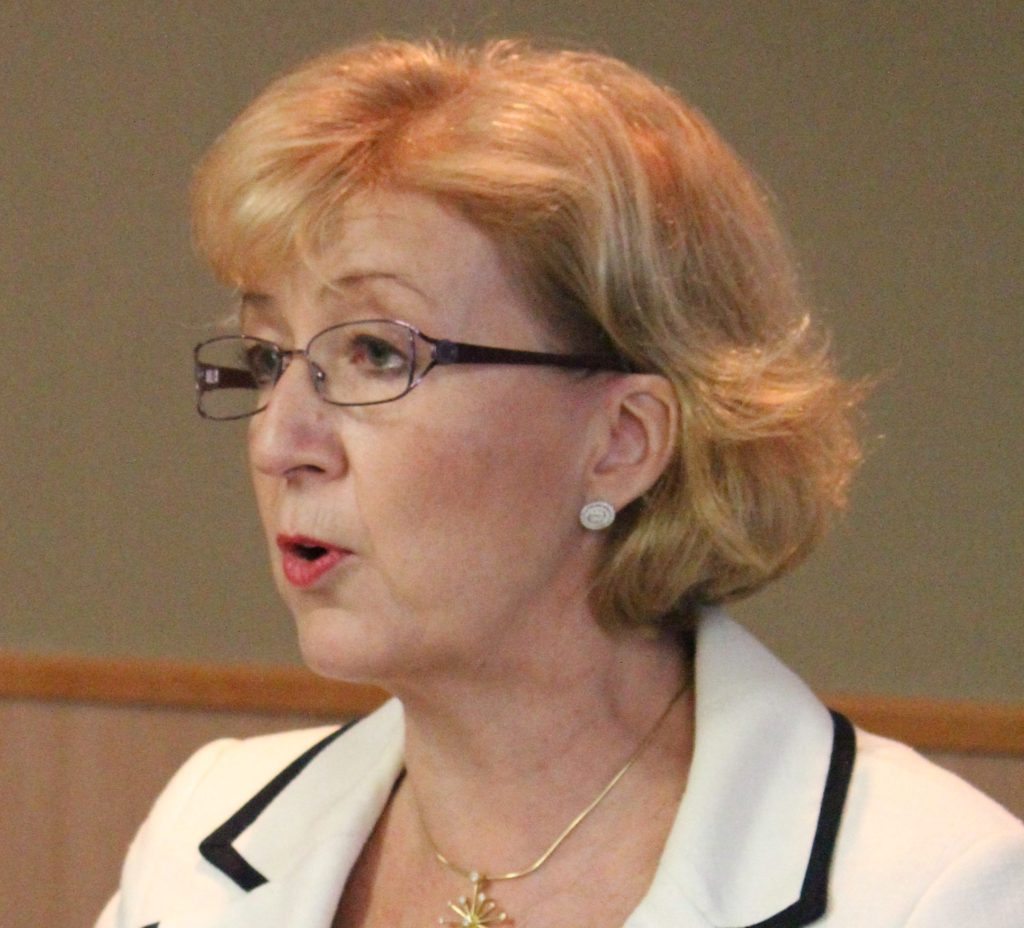 Stephen Crabb has links to an organisation that has hosted supporters of a ‘gay cure’. Theresa May has hinted at deporting EU migrants. Michael Gove has described himself repeatedly as “not equipped to be Prime Minister”. And Liam Fox… is Liam Fox. The Conservative leadership candidacy of Andrea Leadsom, however, falls slightly under the radar as she has never held a cabinet position. On the internet, though, there’s ample evidence of her stated opinions on everything from gay marriage to business regulation – and she’s looking as dodgy as the rest.

Having just received backing from Boris Johnson, Leadsom’s campaign for Tory leadership has had a huge boost. Johnson has described her as having ‘“the zap, the drive, and the determination” needed to be prime minister. But before that happens, she might need to answer a few questions…

Does she really think casual sex was responsible for the death of Baby P?

Circulating today on Twitter is a quote from a blog written by Leadsom in 2008. Entitled “Marriage IS KEY to the safety of our society – what is the media playing at?” Leadsom laments the suggestion that it is an “awful truth” that marriage is the best way to raise children and “defend our society”. According to her:

The self indulgence and carelessness of non-committed adult relationships is, as we’ve just seen in the extreme case of Baby P, proving fatal to the next generation.

The tragic case of Baby P was certainly an extreme example of something – child abuse and neglect. What it has to do with “non-committed adult relationships” is less readily apparent. Exploiting the child’s death to make a dig at people engaging in casual sexual and romantic relationships outside of marriage seems cheap and tasteless.

Will these views on business regulation make it into her manifesto?

#AndreaLeadsom Some might agree with this, but I don't. pic.twitter.com/9SeIbZKx3D

This is another quote from Leadsom, from an address to the House of Commons in 2012. She calls for an end to regulation of small businesses, which she says would entail:

no minimum wage, no maternity or paternity rights, no unfair dismissal rights, no pension rights.

No doubt there are some employees of said small businesses who might object to that. In the launch of her campaign for leadership on 4 July, Leadsom actually directly referenced employment issues such as the national living wage, saying:

The national living wage, the apprenticeship levy and Michael Gove’s important pupil premium will all be safe under my watch.

But in the past, she has been critical of the National Minimum Wage, describing it as an “inevitable pull factor” for EU migrants which would only increase if immigration continued. This was one of the arguments she used for Brexit.

Can she really say she’s passionate about social justice if this is how she feels about gay marriage?

In an interview with The Telegraph, Leadsom said:

Which is all very good, of course. Except social justice means the empowerment of all, and provision of opportunities for everyone. This includes people who have “non-committed adult relationships” and who work for small businesses. If you are against the idea of a raised National Minimum Wage because it might attract migrants, it’s possible that actually you’re not that passionate about social justice after all.

Same too, you could argue, if you refuse to give your support to marriage equality. By choosing to abstain on the equal marriage bill in 2013, Leadsom actually somehow managed to go one further – claiming to have “support for the genuine love and commitment of same sex partners” whilst refusing to actually support said couples because “many of my constituents […] feel very deeply that this proposal is simply wrong”.

Expanding on this viewpoint, Leadsom said:

[I cannot] vote for a measure that risks centuries of faith based belief in marriage as between a man and a woman, that will upset so many of my constituents and which has not yet won public support.

And if that’s the real extent of Leadsom’s support for same-gender couples, it’s safe to say that it doesn’t actually go as far as enshrining one of their much-campaigned-for rights. How far she’ll go on the other social justice issues she supposedly supports remains to be seen.

Support independent media to ensure truth is not hidden by the mainstream.