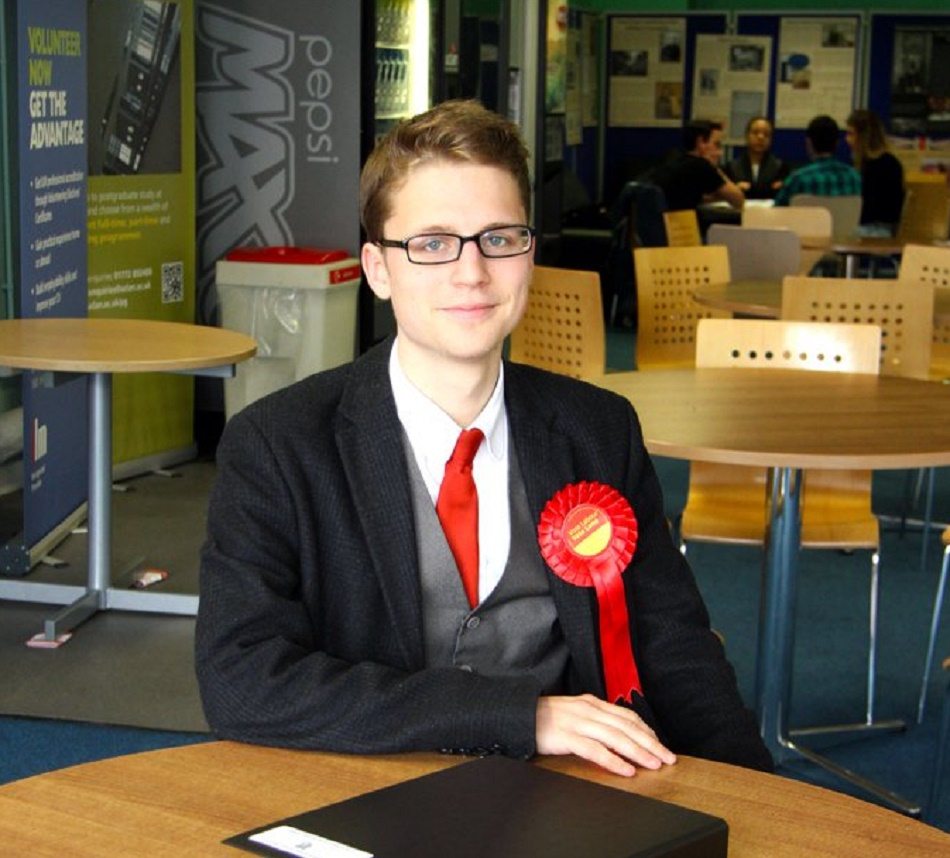 One of the UK’s youngest councillors is taking on the Labour coup plotters in a bid to become an MP – and he’s determined to help Jeremy Corbyn win in 2020.

Josh Brandwood was elected last year to sit as a Labour councillor in Morecambe, Lancashire at just 20-years old – and has spoken exclusively to The Canary about Labour, the attempted coup, his faith in Corbyn and his hopes for the future.

Brandwood, who studied public services and criminology at the University of Central Lancashire, says it was his lecturer Wajid Khan who first inspired him to become politically active. But it was more than this. As Brandwood told The Canary:

While growing up I sadly witnessed social inequality and poverty and felt that it was my duty to stand up and change the status quo. Being a Labour councillor inspired me to make a positive difference to my local community.

He hasn’t taken the decision to stand as an MP lightly, for he will be up against Conservative MP David Morris, who has been incumbent since 2010. Despite this, Brandwood is unperturbed, saying:

I would like to stand as an MP because I want to make positive changes to my beautiful home town of Morecambe. I think it is the right time under Jeremy Corbyn’s leadership to put my name forward. I am tired of the inequalities in society and would like to make a real difference to both my constituency and the rest of the UK.

Discussing his reasons for wanting to become an MP, Brandwood is obviously an avid supporter of the current Labour leader:

[Corbyn] is an inspiration and has the ability to move the Labour Party forward. He is compassionate, resilient, inspiring and a born leader. He has done an incredible amount of humanitarian work and has fought throughout his life for equality. The mainstream media and MPs have to resort to personal attacks simply because they cannot fault his politics.

On the subject of the current leadership challenge and Angela Eagle, with Eagle formally launching a leadership challenge on Monday, Brandwood said that “she voted in favour of invading Iraq and also carrying out airstrikes in Syria, convincing me her leadership would not be ideal for the Labour party”. Something which may prove problematic for many Labour supporters.

Discussing the attempted coup, Brandwood showed that he is not a person to mince his words:

It’s simply undemocratic, and those conspiring against our current leader should move aside to allow the party to move forward. However, since the Chilcot enquiry report, the debate around Jeremy Corbyn’s leadership has somewhat diluted. Some tabloids have even gone as far as commending him for his sensitive response to the investigation. On the other hand, it is simply a matter of time before the mainstream press returns their focus to Labour’s current leadership ‘battle.’

When asked about the parliamentary Labour party (PLP) attitude toward Corbyn, he remarked:

The PLP have no choice but to move forward from the current debacle. They should respect the mandate and appreciate that 100,000 new members have joined the party since the EU referendum. I think it is absolutely ridiculous the PLP have caused infighting when the Conservative Party are currently without a leader. They are in a leadership crisis and we should be exploiting that rather than creating our own issues.

Asked whether he had any concerns over the leadership election and Corbyn’s future, Brandwood was unequivocal:

If we face a scenario where the PLP are not prepared to move forward, then a leadership challenge is required. However, I think most MPs are worried about formally putting their name forward because they are aware of Jeremy’s huge mandate.

If elected, Brandwood said there are several policy areas close to his heart that he would make a priority. A key issue for him is mental health services, which he cites as “one of the biggest contemporary issues of our time”. He lives with Generalised Anxiety Disorder himself, so fully understands the importance of improving access to services and making them a top priority.

He would also focus on the UK’s frontline services, as having been a police support officer himself, he has had “first-hand experience of the adverse impact the Tory cuts have had on service provision [to] our vital services”. Brandwood aims to ensure these are protected.

He’d also make housing one of his top priorities, another area he sees the Conservative government failing on.

“The Tories have continually failed to address the housing crisis”, Brandwood says. “Too many people are spending too much on rent and are unable to buy their own home.”

This young councillor, with big aspirations, knows all too well the challenges that lay ahead for both himself, and for the Labour party. But he remains upbeat:

“I think eventually people will start to accept Corbyn and then divert their attention back to fighting the opposition.”

When asked to sum up the Labour leader, Brandwood does it immediately, and simply:

His sentiments will probably ring true to the hundreds of thousands currently looking to Corbyn to lead the Labour party to victory in 2020.

If Josh Brandwood has anything to do with it – he’ll be sat in parliament with Corbyn in four-years time…or sooner.

Sign the petition  to support Jeremy Corbyn, if you agree.

Read our other articles about the Labour leadership contest.