Turkey's President Erdoğan proves he does not understand hacking, after being hacked by Wikileaks - Canary 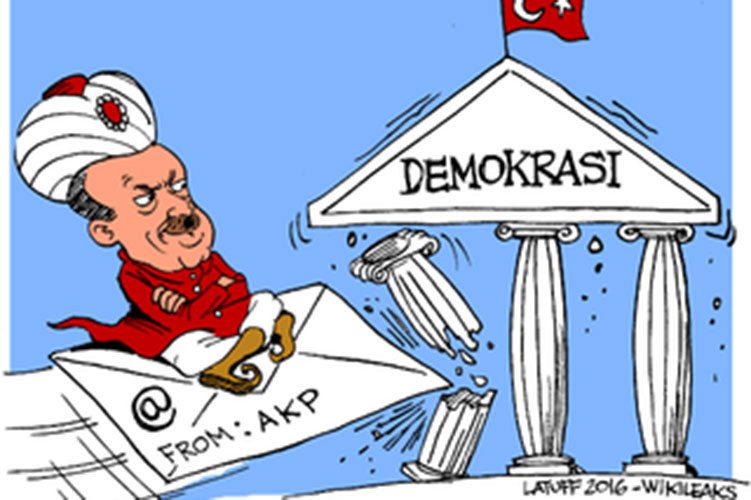 Wikileaks has released around 300,000 emails from Turkey’s President Erdoğan. The emails were obtained before the failed coup against the President last week, but Wikileaks say they decided to release them earlier than planned “in response to the government’s post-coup purges”.

In response, Erdoğan has blocked access to the Wikileaks website, clearly demonstrating that he does not understand how hacking works.

While restricting individuals’ access to the Wikileaks site may hinder people from immediately accessing the emails at the source, the information will get out and around the world very shortly. In addition, other hackers will find ways to get around the block, and others still will find new ways to hack the President’s data if they deem it necessary.

While the ethics of hacking and publishing sensitive material may be fluid and debated, Erdoğan is showing his backward understanding of his own power, if he thinks that he can use his brand of ‘autocratic’ rule to outsmart hackers.

More generally, he is showing his absolute ignorance if he thinks he can silence the Internet. His blocking of the website is likely only to fuel the ‘cyber-insurgency’ against him.

Erdoğan is no stranger to critic-silencing. Turkey is famed for being one of the most hostile countries for journalists, an environment which has just become even more hostile to both journalists and other critics since the failed coup. In response to the Wikileaks data release, The Guardian reports:

Turkey’s telecommunications communications board said an ‘administrative measure’ had been taken against the website – the term it commonly uses when blocking access to sites.

Our infrastructure is under sustained attack. #TurkeyPurge #Turkey

Those with hopes that the emails will provide startling revelations will have to wait, however. The Independent reports that though the hundreds of thousands of emails may eventually produce something of note, the trove of documents is full of:

plenty of spam from Nigerians with fortunes to bequeath upon you, conspiracy theories and press releases.

The news that Erdoğan is considering bringing back the death penalty after “purging” tens of thousands of his critics from their jobs, and arresting thousands of them for the coup, has given the international community plenty of reason for scepticism.

It is unlikely that hackers will take the Wikileaks ban lying down in response to the President’s flagrant breaches of democracy.

International hackers working under the Anonymous title are renowned for shutting down, altering, and or hacking websites, particularly in retaliation to government actions that they deem to be oppressive.

Though frequent accusations of vigilantism are also troubling, there are an overwhelming number of situations in which the Anonymous collective has wrought some semblance of justice from previously unyielding power structures.

It remains to be seen whether Wikileaks will expand on their initial data release, or whether Anonymous will join them in response to the increasingly oppressive crackdown in Turkey.

Stay up to date with the situation in Turkey at The Canary.

Search the emails at the Wikileaks AKP emails page.