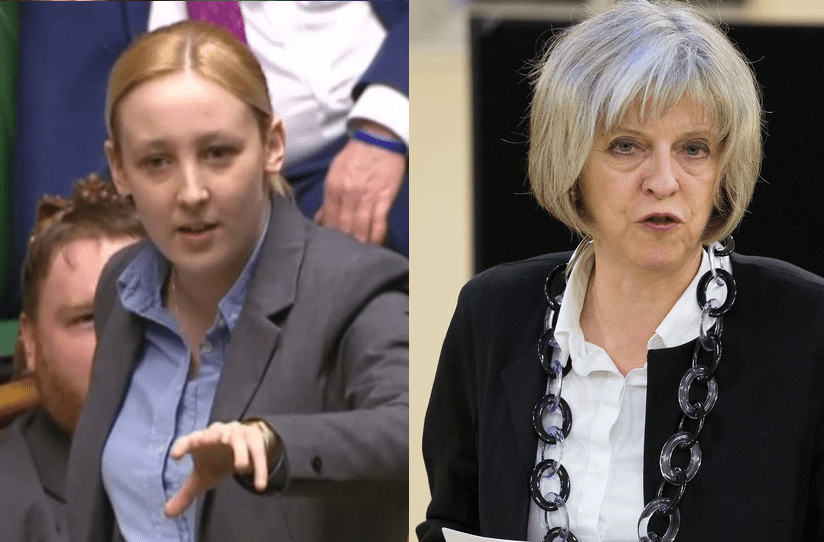 Responding to a question from Jeremy Corbyn at her debut Prime Minister’s Questions (PMQs), Theresa May confirmed her government will continue ideological austerity:

He calls it austerity. I call it living within our means.

But the UK’s youngest MP, Mhairi Black, had the perfect response:

PM says austerity on her citizens is called 'living within our means' and yet is fully prepared to pay anything for renewing Trident. #PMQs

The Campaign for Nuclear Disarmament (CND) has estimated that the lifetime cost of Trident could be up to £205bn. Meanwhile, the profit trails for nuclear weapons are very concerning. The Canary’s Steve Topple notes that HSBC and Barclays finance both Russian and British nukes.

Black has rightly called May out for being prepared to spend billions on Trident, while the Conservative government removes vital support for disabled people and makes huge cuts to the education system and NHS. With the £205bn the government plans to spend on Trident, we could employ 300,000 nurses, build 3 million affordable homes or pay the tuition fees for 8 million students.

And most significantly, investing in infrastructure and healthcare would actually yield long-term economic benefits, while austerity only piles on more debt. George Osborne left £1.6 trillion of debt with the taxpayer when he ended his tenure.

When we founded the NHS and built over a million new homes – 80% of which were social housing – under Clement Attlee’s post-war government, public debt was at 225% of GDP. Between 1945 and 1980 national debt had fallen to just 43% of GDP. That’s because the economy is not a household – the government has to spend money to make money. For example, constructing social housing is jam-packed with economic benefits. When you build a social house the money does not just disappear, but costs are returned to the state through rent payments.

Further, the taxpayer does not just break even in providing security for families with an affordable home. Social tenants will be freed from parasitical landlords charging huge rents. This means they will have significantly more disposable income, which they will likely put back into the economy. Construction also stimulates the economy through increasing demand for jobs and supplies.

The SNP’s Black summarised the contradiction at the heart of the Conservatives’ economic policy – we have money for nukes, but not to provide a civil welfare state to civilians. And most importantly, providing such a welfare state is the key to reducing public debt – austerity only piles it on.

See the six steps that need to be taken to save the NHS here.

See other articles at The Canary on Trident.