After sealing his nomination, Trump proves his incompetence by threatening the UK and Europe - Canary Workers’ Co-op 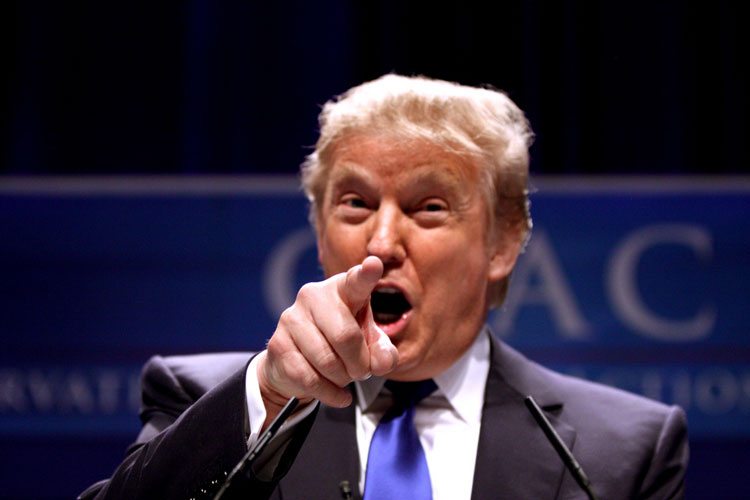 Having batted away the ‘Never Trump’ movement at the Republican National Convention, Donald Trump has secured the party’s nomination for President of the United States. As if that wasn’t troubling enough, upon crossing that barrier he immediately escalated his already bombastic plans for American foreign policy – but this time, by threatening his allies.

In a sit down interview with two New York Times journalists, Trump was asked about his political tone, about the differences between his positions and that of the “more traditional Republican, engaged internationalist view of the world”.

This started a conversation about alliances, and Trump’s hard-ball attitude to even those who aren’t aggressors. Ultimately, Trump threatened to break the United States’ NATO treaty obligations – the agreements between Western powers to back each other up in the event of an attack.

…if we cannot make a deal, which I believe we will be able to, and which I would prefer being able to, but if we cannot make a deal, I would like you to say, I would prefer being able to, some people, the one thing they took out of your last story, you know, some people, the fools and the haters, they said, “Oh, Trump doesn’t want to protect you.” I would prefer that we be able to continue, but if we are not going to be reasonably reimbursed for the tremendous cost of protecting these massive nations with tremendous wealth — you have the tape going on?

He goes on – in a lengthy, muddled, and roundabout way – to complain that other, mostly European, “fantastically wealthy” countries paying less into the NATO budget than the US does, is unacceptable. He made clear:

I would be absolutely prepared to tell those countries, “Congratulations, you will be defending yourself.”

Let’s be clear here. The Canary has previously reported on the legitimate questions on NATO abusing its power to expand beyond its remit, and even provoke a wider a war with Russia, for instance. But these aren’t Trump’s concerns. Trump’s ‘concern’ boils down to this: America is paying to defend Europe, so to hell with Europe.

But it’s not that simple.

There are a number of ways the NATO alliance is funded. ‘Direct funding’ of NATO is based on a country’s military budget, civil budget and their contribution to defence infrastructure (NSIP). The imbalance between US input and other countries’ input has long been the case, because America’s GDP and military budget are vastly bigger than any other country in the world, let alone the NATO countries.

It has been a source of friction before, but leaders have all recognised the political significance of breaking the alliance. 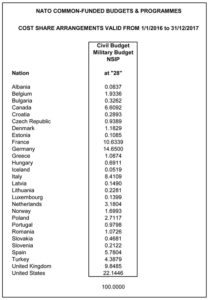 The more he bumbles through interviews, it becomes clearer that Trump actually means what he says. He has a simplistic view of the world and America’s position in it, and he intends to follow his misguided nose down any cutthroat path he deems potentially beneficial to his idea of beautiful ‘Merica.

Whether or not Trump actually goes through with dropping his alliances with other countries in the name of his ‘America First’ stance, the fact that he is actively disrupting positive relationships with other countries before his Presidency has even started is his most bullheaded display of incompetence yet.

Asked what he meant by the slogan ‘America First’, given its historically-loaded, isolationist roots, he replied:

…we are going to take care of this country first before we worry about everybody else in the world.

But statements given as to how he intends to achieve ‘taking care of the country’ have been equally as empty. One example being that his paying lip service to a movement of “law and order” in the same sentence as one of “compassion”.

When Trump talks about the problems of race relations, and the longstanding police brutality that the Black Lives Matter movement stems from, he reduces it to a problem of people “shooting our policemen in cold blood”.

If he had any compassion for people subjected to neglect, poverty and fierce, racist oppression, he would know better than to at best ignore black Americans, and at worst portray black Americans as ‘cold-blooded’ aggressors.

In all of Trump’s expressions, and no less this latest one, two things seem clear. Firstly, Donald Trump has an imperialist, cutthroat, self-serving view of the world. Geopolitics is a effectively a pissing contest, a business experiment from which “you always have to be prepared to walk”. His ruthlessness fosters a complete lack of empathy – or the other way round.

Secondly, he does not appear to understand the danger that this approach creates: the lack of stability that dominance and ruthlessness brings. His view of the world, from the precipice of an American supremacy that he wants to expand, means that black-and-white ideas of good-and-evil become worse than ignorance. They become authoritarian.

Then again, we can now rely on Boris Johnson – who, responding to Trump’s comments today, comes off as thoughtful and responsible in comparison. Considering his record, the two men should get on relatively well if Trump wins.

Read our articles on Donald Trump.