In 2015, George Osborne announced he was scrapping maintenance grants for students from low-income families and replacing them with loans. Those changes came into effect on 1 August. The response at the time largely criticised Osborne for “picking on the young” and “saddling” them with ever more debt. But ultimately, this move is the latest in a long line of policy proposals which pick on anyone who doesn’t subscribe to their wealth-blinkered position and which demonstrate the Conservative party’s inability to comprehend the realities of inequality in Britain.

The apparent assumption is that there are hordes of naturally selfish ‘youth’ who want their education handed to them on a silver platter, at no expense, and then to doss about on benefits. And if this seems like hyperbole, just look at what Osborne himself said in the budget speech which saw the announcement of the grant-scrapping policy:

It is not acceptable that in an economy moving towards full employment some young people leave school and [move] straight on to a life on benefits. So for those aged 18 to 21, we are introducing a new youth obligation that says they must earn or learn.

Ironically, Osborne’s own education was free, as he acknowledged and staunchly defended in a letter to a young Brit before the Conservatives came into government (see below). But had there been fees for him, his family would not have struggled to pay them, and it’s likely there would have been no need for Osborne to be “saddled” with a “lifetime of debt”, as the NUS claims students are today. 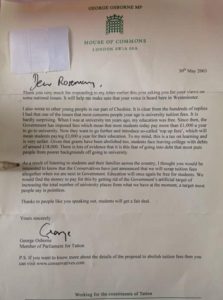 At the time of writing the letter, Osborne called student fees “a tax on learning” and “very unfair”. A world away from Conservative rhetoric today.

A ruling party that’s seriously out of touch

Osborne’s party appears not to understand or acknowledge that it’s socio-economic circumstances which push some young people to go immediately from school onto benefits. If it was aware of the difficulties of a life on welfare, it would perhaps realise that few would actively choose such an existence over the dignity and security of a job.

It’s the state of the economy, the reduction in opportunity, and increasing inequality that have fostered massive youth unemployment and, as a result, political apathy among young citizens. Saying that, it’s evident from Osborne’s wording and framing of the subject that the “obligation” is still on young people to “earn or learn”, rather than on the Conservative government to develop an economic system that actually works for the majority of British citizens.

And low-income students are not the only people to be handed the tab for Britain’s struggling economy. Other policies introduced by the coalition and Conservative governments of 2010 and 2015 have also battered some of the country’s most vulnerable citizens. The Bedroom Tax, changes to benefits and tax credits, and benefits sanctions, for example, have all been harshly skewed against this sector of the population.

Iain Duncan Smith’s defence of zero-hour contracts, meanwhile, shows that the Conservative ideology can spin anything that shifts power upwards as beneficial for the average worker. As Larry Elliot has said at the Guardian, “power is tilted decisively in favour of employers” with these contracts.

This is the way that British capitalism currently works. It’s neoliberalism, Thatcherism, and in the future may come to be known as Cameron-ism or Osborne-itis. Wealth is shifted upward and outward, and rights are stripped, leaving the expanding general population with less and less power, even if they’re employed.

Today’s scrapping of maintenance grants is just another click of a cog in the Tory mechanism for average Brits. For all citizens to prosper, there needs to be a true reformatting of our economic and social policy, from a wildly different perspective.

Write to your MP and the Prime Minister about education policy and funding.