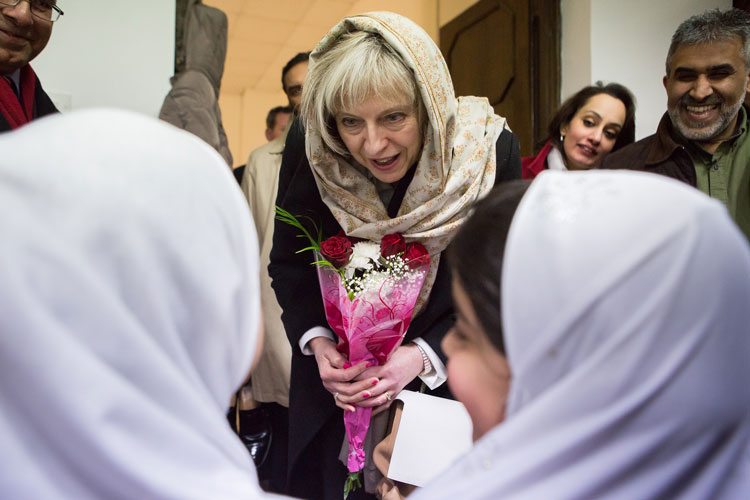 Theresa May has been slammed as a “complete disgrace” for turning her back on stranded refugee children.

Back in February, then Home Secretary Theresa May “personally” made the choice to appeal a “landmark ruling” that allowed three children and a man from the Calais ‘jungle’ to be quickly reunited with their families in Britain. The judge in the original ruling called the lengthy asylum process, which sees adults and children left indefinitely in squalid camps, a ‘breach of human rights’.

But that process has now been cemented after the Home Office appeal was victorious, being passed by judges on 2 August.

Due to her involvement in the appeal, and after scrapping the role of Syrian Refugees Minister only 10 months after its creation, May has been accused of “hypocrisy“, and her inaction on protecting child refugees has been labelled a “complete disgrace“.

On 3 August, the day after the appeal ruling, it was reported that the UK had only accepted 20 child refugees so far, out of the estimated 90,000 who are alone in Europe. Back in May, the Dubs amendment forced the government to pledge the settling of 20,000 refugees in Britain by 2020. So only 19,980 to go, then.

Yvette Cooper, the chair of Labour’s refugee taskforce, has been particularly vocal about both the appeal and the Conservatives’ lack of delivery on their targets, saying of the Prime Minister:

By pursuing this appeal the Government is turning its back on the small number of vulnerable child refugees who could have been offered safe haven quickly with relatives in Britain.

Theresa May personally made the decision to pursue this appeal – and it is a complete disgrace that a British Prime Minister should behave in this way.

Her claim to be personally tackling modern slavery is utter hypocrisy when she is forcing these children into even greater risk of slavery, exploitation and abuse.

Cooper is joined by Liberal Democrat leader Tim Farron in slamming the government’s lack of compliance with its pledge:

It is disgusting that the government is putting ideology above what is best for these desperate and vulnerable children.

These kids have already been through what no child should have to, and there is absolutely no doubt that what is best for them is to be with their family, here in the UK.

The reason behind the judge’s decision in the appeal case was particularly noteworthy. The original case had allowed the four refugees to skip the lengthy Dublin III Regulation – which says that a refugee must apply for asylum in the first ‘safe’ country they enter – to seek asylum with their families in the UK. Even though ‘Article 16’ allows for refugees to be housed in a different country in order to reunite families, the original case that saw the four refugees come to the UK had concluded:

But when Lord Justices Moore-Bick, Longmore and Beatson accepted the Home Office appeal, they ruled that this should only be allowed in “especially compelling” cases.

There have been plenty of reports of just how terrible conditions are in the French refugee camps, and of the numbers of lone children, some of whom are being preyed upon, in Europe. That the cases of the thousands of atomised and poorly-cared for refugees, and particularly lone children seeking to be reunited with family members, isn’t ‘especially compelling’ for the Lord Justices is a heartbreaking fact.

Theresa May has both actively and indirectly worked against those desperately in need during her transition from Home Secretary to Prime Minister of the fifth (or sixth) biggest economy in the world. In line with the Conservatives’ individualist ideology – that says ‘strivers’ will always find a way to successfully fend for themselves, May is proving her ignorance about the true needs of vulnerable people.

Alf Dubs, the Labour peer who proposed his amendment to the Immigration Act that forced the government to accept a fair share of children for asylum, gave his account on 4 August of the lacklustre effort by the government both in bringing children to be reunited and communicating its actions to parliament. He said that, in the face of government inaction:

People should ask their MP to press the government for a speedier response. Local groups are in a good position to approach councillors to get the council to agree to take refugees.

It’s bad enough when British adults’ struggles are wilfully ignored. But here, we are talking about forcibly ejected and lone children. And May has yet to prove that she finds their needs ‘compelling’ enough to act upon.

Lobby your MP and Number 10 on this issue.

Read Canary articles on the refugee crisis, refugees and Syria.

Read about the inspiring actions of children who remain in Syria.