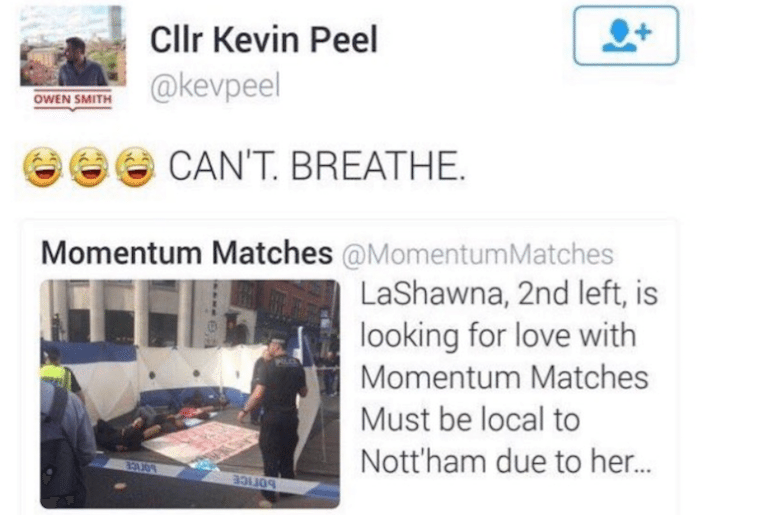 A new Twitter account created to mock Labour’s left has garnered support among Owen Smith supporters, including Labour councillor Kevin Peel. It relies on racist, Islamophobic and transphobic stereotyping for much of its humour, and counts a fascist news site among its other fans. 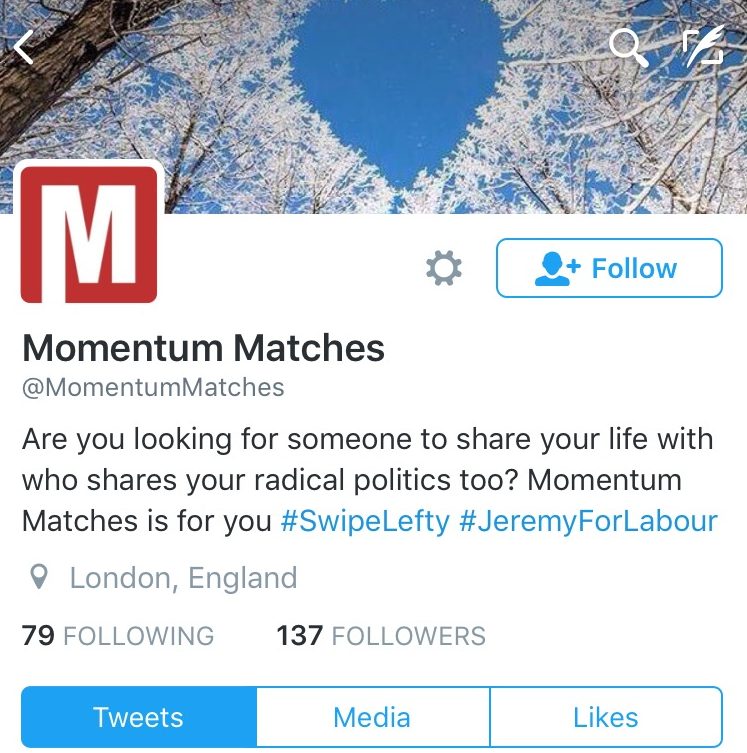 The account, called Momentum Matches, is a parody of a dating site for those on the Labour left. Its bio reads:

Are you looking for someone to share your life with who shares your radical politics too? Momentum Matches is for you

The tweets usually take the form of a photograph of a person at a protest, with a list of things they ‘like’ and ‘dislike’. These are generally irreverent and often include Marxism as a ‘like’ and Israel, Israelis or Zionism as a ‘dislike’.

Racism and a Labour councillor

Unfortunately, the account’s commitment to opposing bigotry doesn’t seem to apply to its own tweets.

In a tweet on 5 August, following a day of protest from the UK Black Lives Matter campaign opposing police brutality and racism, the account posted a photograph from the Nottingham demonstration. Choosing a name that is popular in the African-American community, the tweet reduces the protest, the vital reasoning behind it, and the reality of being arrested for protesting systemic racism to a cheap joke. 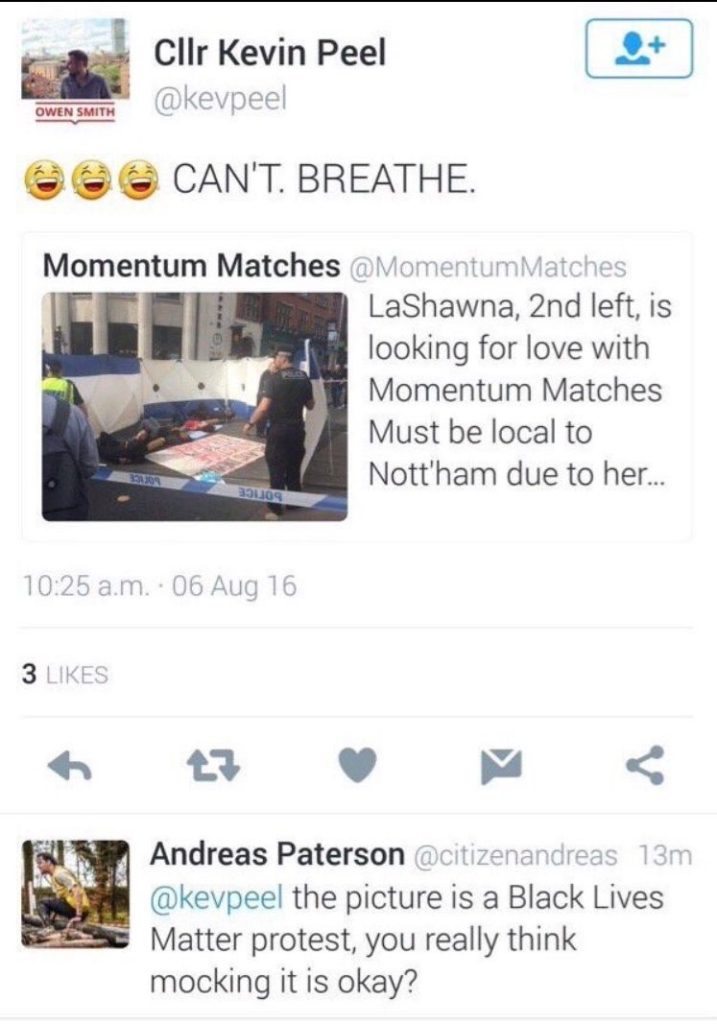 This tweet was a big hit with the Manchester Labour councillor Kevin Peel, who ‘favourited’ and shared it with the caption “CAN’T. BREATHE.” alongside emojis indicating his amusement before deleting his tweet, following criticism.

‘I can’t breathe’ is a slogan often used by Black Lives Matter campaigners because they were the final words of Eric Garner, who died after his arrest by police in New York City in 2014. We can only hope that Peel was somehow unaware of the story behind the phrase.

Other retweeters of this joke included several accounts with banners showing their support for Smith. And ‘Third Position’, a white nationalist group. 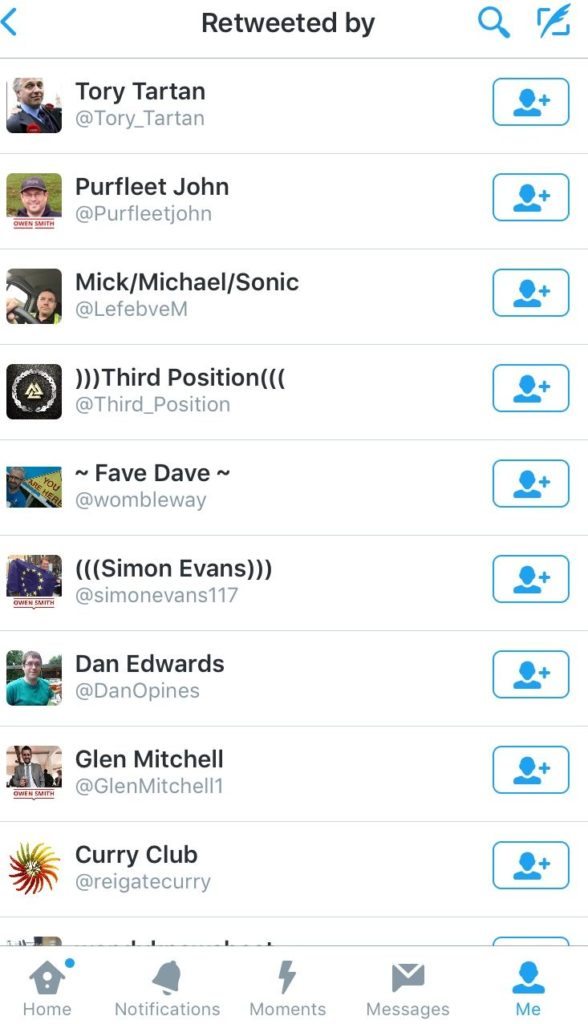 Islamophobia and xenophobia, too

There is another photo from a UK Black Lives Matter protest, this time featuring a person wearing a hijab. Momentum Matches uses Islam as the butt of the joke, referencing “Ayesha’s” likes as “Allah” and dislikes as “pigs” and “immodest attire”. The reference to pies is, presumably, another joke.

“Guilietta”, meanwhile, is “looking for love + a UK passport” and likes “working cash in hand, not being deported”. Especially significant given the recent outrage about Byron Burgers’ deportation of migrant workers tricked into attending an investigation by immigration officers, the account is perpetuating lazy stereotypes about migrants while also being especially callous.

Another theme of the account is its tasteless use of the word “triggered”, which refers to someone who has experienced trauma re-visiting that trauma or the psychological or sensory experiences related to it, and can be extremely distressing for the person who experiences it.

Making light of it has become popular on the internet, by people who have presumably never had to deal with long-lasting psychological trauma. Momentum Matches uses the concept to belittle racism – suggesting that ‘Jamal’, a person of colour, is “triggered” by whitesplaining and cultural appropriation, both of which exist in the wider context of societal racism.

Even consent is funny

Apparently nothing is off-limits for a Momentum Matches joke. Even rape. The account tweeted that, as a “dating site for socialists”, it only advocates sex “after written consent, while sober, using barrier contraception”. The ‘joke’, apparently, is that many people on the left, especially feminists, fight tirelessly for consent to be recognised as necessary. Hilarious.

And pronouns, of course

The idea that someone might be trans and might use pronouns that are not he or she is evidently very funny. Sexuality and gender aren’t the same thing, though.

As yet, there has been no indication as to who might run the account. But given its evident popularity among Smith supporters and councillors like Peel, some have suggested that it may be someone within the Labour right itself who has then shared it with friends in the party.

If so, things might be about to get very interesting indeed.