My father's family were wiped out by Hitler, so I won't stand by while the Daily Mail calls Corbyn supporters Nazis [OPINION] - The Canary 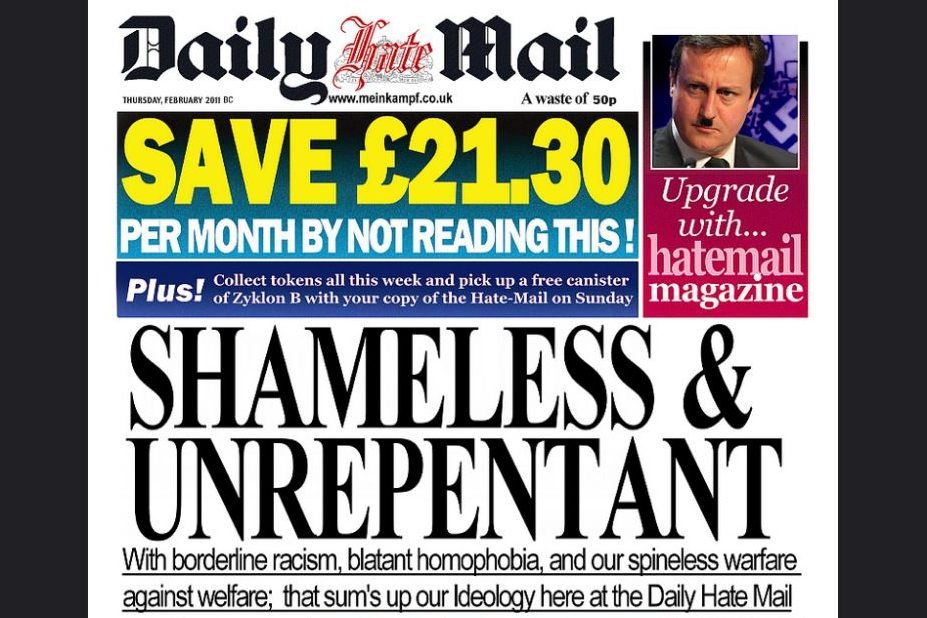 The Daily Mail has gone way too far. (Again.)

Apart from a brief glimpse of headlines outside a petrol station when I stop to fuel the car, I’m fortunately not exposed to its offensive, bigoted, bile-spewing, populist drivel very often. I’m also proud to say the majority of people I know and associate with would probably rather chow down on a bowl of Pedigree Chum than be seen as identifying with the publication. Most Daily Mail enthusiasts don’t need a newspaper. Just a colouring book, and perhaps a Capri-Sun.

A step too far

Every so often, however, the sorry excuse for an news outlet will churn out something so offensive and outlandish that even rational and liberal people will circulate it – just to prove how utterly bonkers some within the right-wing political establishment have become. At the weekend, someone on my friend list did just that, and the headline caused my jaw to hit the deck with a tooth-shattering thud:

I therefore did something I was pretty loath to do. I clicked and read a Daily Mail article. As was to be expected, the contents were simply appalling.

Recently accused of being ‘jihadists’, Corbyn supporters are now apparently full-on Nazis. The irony that it should be The Daily Mail to accuse others of this is also a detail nothing short of hypocrisy.

The Daily Mail even provided a picture of Hitler with his SA troops. You know, just in case there was even an inch of ambiguity. When The Sun ran with commentary on the article later, they kindly sourced a different one – of Hitler performing the Nazi salute. It was so very considerate of them to circulate an even more evocative subliminal slur.

This whole antisemitism ‘thing’ is just getting way out of hand. And perhaps I’m in a fairly unique position to challenge Mr Michael Foster for his grotesque commentary in The Mail. You see, my father was an Austrian Jew relocated to Britain during WWII. His family were actually wiped out by Nazis in the Holocaust. So please excuse me if I’m unwilling to take lectures on antisemitism from the paper which opposed Britain offering my father sanctuary at the time.

In fact, this is how the paper Foster published his rant in referred to Jews fleeing the Nazi holocaust at the time.

Two sides to every argument

The Daily Mail seems to think that, because Foster is Jewish, he is in a position to speak for all people of Jewish descent. Throughout the smear campaigns of recent months, those opposing Corbyn have attempted to weaponise the harrowing experience of groups often prejudiced against: LGBTQ+, Jews, women… all to fire at the movement around Jeremy Corbyn in the hope of creating a few casualties.

As a man of half Jewish ancestry myself, I’m pretty sick of the ethnicity being slung about like a mandate of automatic moral superiority. Regardless of my background, I define myself as a non-religious and secular humanist who happens to believe that no ethnicity or religious group is entitled to claim superior understanding or wisdom on such grounds alone. Only the merit of logic and rationale entitle you to claim those; they have nothing at all to do with skin colour or lineage.

I have friends and acquaintances from all walks of life, but many of them are Jewish. They are generally some of the kindest and nicest people I know. I also grew up around Jewish families. It’s one of the reasons I can distinguish a lacklustre American bagel from a delicious Jewish ‘bygel’. And as the Israel-Palestine conflict ramped up a notch a few years ago, I challenged suggestions on social media that ‘the state of Israel doesn’t have a right to exist’ or that it should be relocated to the USA. The occasional confusion of anti-Zionism and antisemitism was out of line, and needed to be called out.

Yes, I’m generally able to make enemies on both sides of any given political debate. It’s a gift.

But really, isn’t that the point? Nothing is black and white. The Israel-Palestine conflict is an extremely complex situation, and only someone quite naive would suggest the conflict is entirely the fault of one side or the other. In exactly the same way a critic of al-Qaida or Daesh (Isis/Isil) isn’t necessarily (or justifiably) prejudiced against all Muslims, neither is a critic of the state of Israel somehow intrinsically prejudiced against all Jews.

The mainstream media don’t ‘get it’

The mainstream media don’t seem to be able to get their heads round the notion of nuance. Instead, the mere hint of a suggestion that Israel is violating human rights or heavily oppressing Palestinians, or that the state has disproportionate financial/business ties to Western infrastructure, daring to say any of this is almost inevitably skewed as ‘antisemitism’.

Well if that’s the case, I’m apparently ‘prejudiced’ against myself and my own family/friends. A frankly ludicrous assertion.

The same is true of even a basic willingness to hear out those who would argue on behalf of the Palestinian people. Israel has undoubtedly committed atrocities, but so have some Palestinian organisations. Deciding that one side alone is righteous is little more than a crude absolutism. You don’t mediate and solve a dispute by only listening to one side of it.

Only one mainstream politician in the UK seems to get that, or have the balls to even acknowledge the other viewpoint needs to be heard (the same being true in a multitude of other situations, too). That is Jeremy Corbyn. I do not believe for one minute the man is antisemitic or prejudiced against anyone other than disaster capitalists and elitists. In fact, he’s actively stood for equality, social justice, peace, and an end to war and oppression his entire career.

No matter what these b*stards sling at him, nothing is able to detract from that, and that is why so many people continue to support him. It’s certainly nothing to do with us being ‘Nazi stormtroopers’. A comparison I find particularly deplorable and antagonistic. Like the desperate slurs of ‘communism’ and ‘Trotskyism‘, antisemitism is a slur that tugs at the heartstrings of the well-meaning but less well-informed. It’s a deliberate ruse to link a political movement all about peace and equality to groups that are anything but. The slanderous title of ‘Nazi’ tarnishes us with the worst and most offensive connotation imaginable. A desire for genocide, which is just despicable.

Toys out of the pram

But neither are Corbyn supporters universally ‘economically illiterate’, ‘schoolboy idealistic revolutionaries’, or ‘bullies and arm-twisters of the left’. We’re mostly just rational, peaceful people who recognise right from wrong and identify actual bullying when we see it. Some of us are even quite well read and well educated, contrary to Foster’s assertions.

But do you know which group generally really hates being challenged or picked up for their behaviour, Mr Foster? Bullies.

This privileged c*ck-womble of a man (oh dear, I’m such a bully) was one of those who began this entire torrent of divisive and distracting chaos. Chaos that has allowed an unelected Conservative government to simply get on with any number of malevolent machinations, virtually unopposed. I can’t even recall the last time I heard of what the insidious post-Brexit Tories have been up to on mainstream news. It’s just been ‘Labour chaos’, ‘Labour division’, ‘destruction of the Labour Party’ etc. Or in the words of Frankie Boyle:

Look at the shiny shiny.

Foster is the man who deliberately and specifically instigated a wasteful court case, supposedly arguing that an overwhelmingly popular and elected leader had no right to defend himself against an inside coup. Or even be on the next leadership ballot. To anyone with the vaguest conception of fairness, that was clearly an unacceptable proposal. But the Labour Party elites have thrown every toy out the pram to get their own way. No ruse too silly, no slur too debased. And in the end, like some kind of mafia boss, they illicitly positioned a dodgy and grossly overpaid judge named Philip Sales to diminish Corbyn’s support. A QC who is in essence a turd moulded in the image of Tony Blair’s sphincter.

But of course, this corruption, desperate mud-slinging, and deliberate subversion is simply a figment of our loony-left, bongo-playing commune’s vivid and ‘revolutionary’ imagination, isn’t it?

From BBC bias to Angela Eagle suggesting a broken window in a communal building was a direct attack on her and her office, the whole inside coup campaign against Corbyn stinks. And no matter how much you try and slander people wanting a fairer society as ‘extremists’, Mr Foster, many people out there realise it’s anything but.

It’s an overwhelming desire for common decency; a belief that the needs of the many should outweigh the needs of the few. It’s a concept you’re clearly none too interested in – throwing around your £400,000 donations to fund little more than personal bias, and a subversive agenda. I wonder how many needy families you could have personally fed, clothed, and educated for that very same amount.