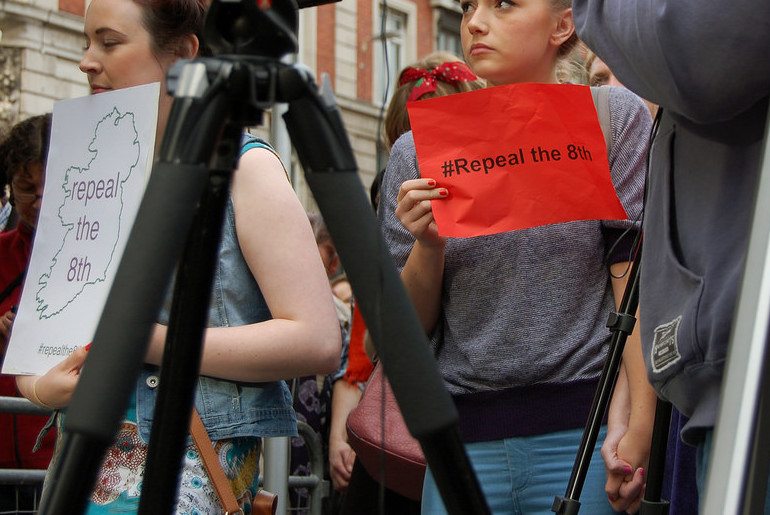 Two friends from the Republic of Ireland have shared their experiences of travelling the 48-hour round-trip from Dublin to Manchester in order for one of them to get an abortion.

The pair tagged the Irish Taoiseach (Prime Minister) Enda Kenny into every tweet in an attempt to place pressure on his government’s current anti-abortion stance.

The Eighth Amendment to the Irish Constitution, which was established in 1983 through a referendum, outlaws abortion except where pregnancy will lead to death, and gives the foetus a right to life equal to the pregnant person.

In June 2016, the UN Human Rights Committee called on the Irish government to introduce “accessible procedures for pregnancy termination” after ruling that its refusal to give one woman an abortion, even though she knew her foetus had a fatal abnormality, amounted to cruel, inhuman and degrading treatment.

Amanda Mellet, who lives in Dublin, was forced to travel to Liverpool in order to terminate a pregnancy in 2011. The round-trip and private treatment cost her €3,000. The Human Rights Committee reported:

Many of the negative experiences she went through could have been avoided if [she] had not been prohibited from terminating her pregnancy in the familiar environment of her own country and under the care of health professionals whom she knew and trusted.

Following this recommendation from the UN, some called for an immediate referendum on whether to repeal the 8th.

The UN committee’s verdict in this sensitive and distressing case is non-binding.

Thanks to that decision, the women behind the ‘Two Women Travel’ account were forced to make a similar journey in August 2016.

From Dublin to Manchester

Explaining their motivations, the women said:

We wanted to share the very ordinariness of the situation – we wanted to show it for what it is; a series of waiting rooms, moments in transit, a sequence of tediums protracted by stigma. No filters, no monologues, just the facts.

The 25,300 followers that the account gathered over just three days followed the women as they boarded their plane at 5am and travelled to the clinic in a taxi.

Pretty ordinary sights, in a place away from home. Can't say it's comforting, though @EndaKennyTD #twowomentravel pic.twitter.com/3FTxYGAG1y

An hour later, they were redirected to another clinic. They joked about Kenny paying them back for the additional taxi fare, but if Mellet’s trip cost €3,000 in all, it’s not really a joke at all.

People from Ireland are not eligible for NHS treatment, and must go private. Marie Stopes, a reproductive health provider in the UK, quotes upwards of €500 for the procedure alone.

Though many aspects of the journey were indeed ‘ordinary’, it clearly took its toll on the women. They described feeling exhausted from a lack of sleep, and later explained that they had not eaten either.

The following morning, when the two had finally got some sleep, they woke to find blood in the bed from the procedure. When their plane home was delayed, they described waiting in pain.

Not the first or the last bleeding women about to face a long treck home @EndaKennyTD #twowomentravel pic.twitter.com/08q2CQE3Yw

Hey @EndaKennyTD dont u just love it when yr flight keeps gettin delayed while u sit there in pain? #twowomentravel pic.twitter.com/RsWqU0RDfQ

Marie Stopes provides specific information for those travelling home after an abortion, because the nature of the procedure can be complicated by a flight home. Bleeding and pain are both expected.

As yet, Kenny has not acknowledged the women’s story. Given that they are two of thousands who make such journeys every year, perhaps he won’t. But according to the women, the account has been acknowledged by others who have similar stories.

To all of you. We hear you and we love you. Courage and solidarity ❤️ @EndaKennyTD #twowomentravel pic.twitter.com/hgGTnKGCIJ

Whatever happens, a discussion has been sparked about the continued expectation on people in Ireland to travel to England for an abortion. The women’s message is clear, and has been heard now by people around the world: this cannot go on.

– Sign the ‘Repeal the 8th‘ petition, if you agree.