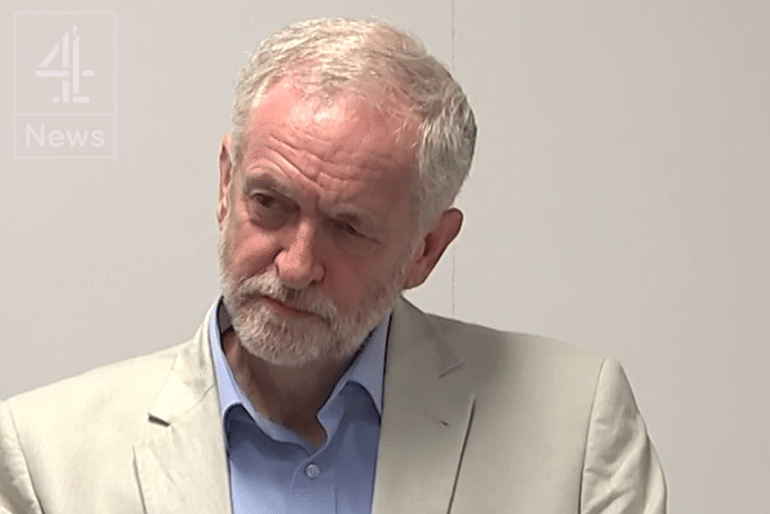 Labour leader Jeremy Corbyn has finally responded to the allegations surrounding ‘Traingate‘, and made a powerful statement in the process:

Jeremy Corbyn appears to show frustration with journalists when questioned on #traingatehttps://t.co/4J7iMtHDrG

On 23 August, Virgin CEO Richard Branson tweeted a CCTV image that appeared to show Corbyn walking past empty seats. The mainstream media has spent an entire 24 hours since then speculating on whether or not Corbyn’s claim that he’d had to sit down on the floor of a Virgin train from London to Newcastle earlier this month was actually fake.

At a press conference called to discuss the NHS on 24 August, a journalist tried to ask Corbyn a question on the matter. The Labour leader was initially annoyed, insisting that this is not what the meeting was about. When the journalist appeared to imply that Corbyn was limiting his freedom of speech by requesting that he ask questions about the NHS instead, Corbyn responded:

I’m glad you’ve watched the CCTV so carefully. It’s a really important issue this, absolutely crucial to the whole nation and the NHS. But let’s get to the details of it. Yes, I did walk through the train. Yes, I did look for two empty seats together so I could sit down with my wife, to talk to her. That wasn’t possible.

He went on to explain that while he was at the end of the train, he had a conversation with the train manager about “the problems of overcrowding and regulations”. Corbyn declined his offer of an upgrade to first class.

According to Corbyn, the reason that footage later showed him seated was because:

[The train manager] very kindly did find some seats, and after 42 minutes, I went back through the train to the seats that he had allocated.

It was when asked why he thought Branson had decided to “make this an issue” that Corbyn really nailed the truth behind Traingate, saying:

I’m very pleased Richard Branson has been able to break off from his holiday to take this issue seriously and with the importance it obviously deserves.

I hope he’s very well aware of our policy, which is that train operating companies should become part of the public realm not the private sector.

And with one fell swoop, it looks like Traingate is gone.

– Read our other articles on the Labour leadership election, proportional representation, and electoral reform.

– Support independent media outlets like The Canary so we can keep bringing you the perspectives ignored by the mainstream corporate media.