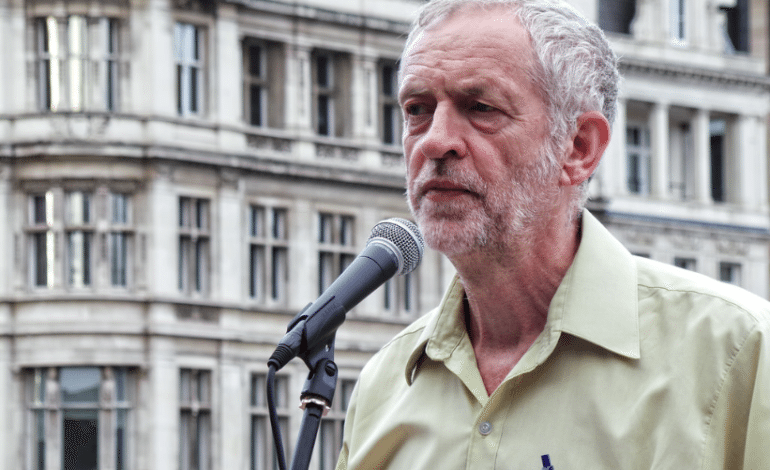 On 30 August Jeremy Corbyn released a raft of new policy proposals as part of a new ‘Digital Democracy’ Manifesto.

The seven main tenets – a Universal Service Network, an Open Knowledge Library, Platform Cooperatives, a Digital Citizen Passport, Programming for Everyone, a People’s Charter of Digital Liberty Rights, and Massive Multi-Person On-line Deliberation – are part of a policy designed to “democratise the internet in order to rebuild and transform Britain, so that no one and no community is left behind”.

In the campaign’s own words, Corbyn’s Labour leadership will:

channel this new energy and creativity into Labour’s general election campaign whenever it comes. It’s in this way that Labour can get back into Government.

Referencing “the creativity of the networked young generation”, Corbyn pledges to:

utilise the advances of digital technology to mobilise the most visible General Election campaign ever.

Behind him is a group of volunteers called ‘Coders for Corbyn’, providing coding, design, marketing, and research skills for the end of getting Corbyn elected in the leadership election, and Labour elected in the future general election.

Coinciding with the unveiling of Corbyn’s ‘Digital Democracy’, Coders for Corbyn have released an online ‘toolkit‘ for supporters to engage with and canvass for the campaign. Features include Corbyn-themed emoticons -‘Jeremojis’ – and buttons making it easy to access all the press releases, events, and pledges of the campaign so far, as well as links to contact regional campaign organisers and volunteer your own time and services.

We want to facilitate greater engagement with members through technology, allowing them to engage in policy making in new, meaningful ways. This is what the future of politics is going to look like – and its great to see Jeremy Corbyn and the Labour Party leading the way.

On Twitter, initial responses from journalists were a mixture of scathing and bemused.

I'm not sure but I think Jeremy Corbyn is launching wikipedia #DigitalDemocracy pic.twitter.com/pVvvqZKiVO

However, it is very clear where the value in some of these proposals lies. The People’s Charter of Digital Liberty Rights arrives at a time when Theresa May’s government is pushing through the so-called Snoopers’ Charter, while the Universal Service Network pledge that every household, company and organisation should have access to broadband is similar to a project that’s already being rolled out in Wales.

The pledge for Platform Cooperatives, meanwhile, would encourage community ownership of digital platforms like Airbnb or Deliveroo – the latter of which, of course, has recently been host to protests from its delivery drivers due to a shift in pay structure that is expected to leave them less-well off.

While some have suggested that the Open Knowledge Library sounds like Wikipedia, and the Massive Multi-Person On-line Deliberation is more like Twitter, an official space for learning and debate would certainly still have worth.

With the ‘Programming for Everyone’ suggestion, Corbyn has ruffled even more feathers. He has proposed that all publicly funded software and hardware be released on an Open Source license. Open Source software is “software with source code that anyone can inspect, modify, and enhance”. Some have called into question the implications on privacy and security of this.

Given Coders For Corbyn themselves have used Open Source software to create their tools, Dash was keen to dismiss this:

Digital Service Standard for Government Digital Services already requires source code to be open, and so incentivising open source development in all publicly funded projects seems the logical next step.

Most of the population has likely used open source items in one form or another, such as cell phones, operating systems within their cars or other home devices, and many other embedded systems. There is no evidence that open source software is either less secure or more secure than its proprietary counterpart and security is more likely to depend on the way the software is implemented and the way data is handled.

What’s more, there are movements within coding to enhance the safety of Open Source, like the Secure Open Source (SOS) fund led by Mozilla.

IT and the government: reloaded

Unfortunately, when it comes to government IT projects, success is not the first thing that springs to mind. The project to digitise the NHS has been underway for years, cost billions, and has been plagued with security failures. It is yet to be completed.

Given this history, it is easy to see why some may share concerns about potential flaws in Corbyn’s proposals.

But on the face of it, there is a lot of good to be gleaned from the Digital Democracy. Alongside it, Corbyn is attempting to harness the wave of young support he has garnered by engaging with the internet – including with emojis and memes.

Though this would by no means work in lieu of policy, Corbyn’s team might just have the substance to go with it.

– Take a look at the Jeremy Corbyn toolkit here.