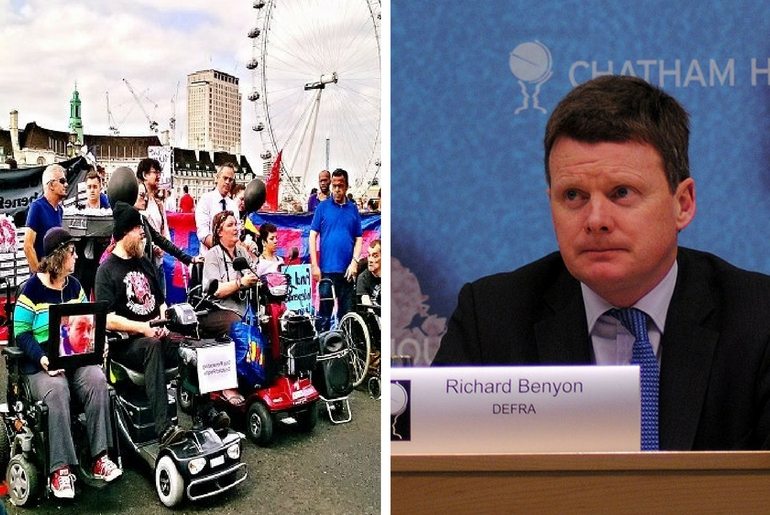 As The Canary reported on 7 September, disabled activists are engaging in a week-long campaign of action against the Conservative government. Tory MP Richard Benyon was so angered by the activists’ blockade of Westminster Bridge that he tweeted (and promptly deleted) about the “bunch of charmers”. But a lack of compassion from Benyon is nothing new.

Waste not want not

Benyon, the MP for Newbury, is reported to be the richest minister in Britain, with a personal wealth estimated at £110m.

It was Benyon who, in 2013, claimed that households were wasting up to £50 a month by throwing away “enormous amounts of food”. He suggested during a House of Commons debate that families were wasting money due to ignorance about refrigerating fruit and vegetables and wrapping cheese.

All those families forced to use food banks, which under the Conservatives remain at a record high, might have something to say about that.

The families forced into homelessness by Benyon’s investments in property might also have something to say. In 2014, The Guardian ran a feature on residents of London’s New Era estate, whose properties were bought by Benyon’s family firm. Where previously one woman’s rent was £640 a month for a two-bed property she shared with her young daughter, it was anticipated that rent would rise to reach market levels – which could be £2,400 a month.

Benyon’s firm was actually found in 2014 to have taken £119,237 in housing benefit from West Berkshire council in 2013 – while simultaneously voting for reductions in housing benefit and in favour of the ‘bedroom tax’. He said at the time:

The average household spends £3,000 per year on the welfare state. This figure had been rising inexorably and unaffordably.

But it is landlords like Benyon who are taking that housing benefit, from the very claimants he is attempting to make poorer.

Of course, the real irony is that Benyon would comment on a disability rights protest at all. Aside from being an MP for the party that has brought in the most brutal of cuts (so brutal that the UN Human Rights Commission has written a report condemning them), the huge familial wealth that Benyon inherited means he has almost certainly never known what it is like to struggle financially.

Statistics have suggested that over two thousand people died between 2011 and 2014 after being found fit for work by a Work Capability Assessment (WCA), meaning that their claim for Employment and Support Allowance (ESA) ended. This is a reality that Benyon will never know.

Likewise, it is often disabled people who are hit hardest by initiatives like the bedroom tax and the benefit cuts that Benyon supports.

This is presumably why he deleted the tweet after it was pointed out to him exactly who those “bunch of charmers” were. Unfortunately for him, the internet never forgets – and the least he could do is apologise. If not for the tweet, then for his party’s constant onslaught on the nation’s poorest and most vulnerable citizens.

– Sign the petition calling for an end to cuts for people with disabilities.

Featured image via The Canary and Wikimedia Commons