Never mind the Brexit judges, Twitter has been highlighting the REAL 'enemies of the people' [TWEETS] - The Canary 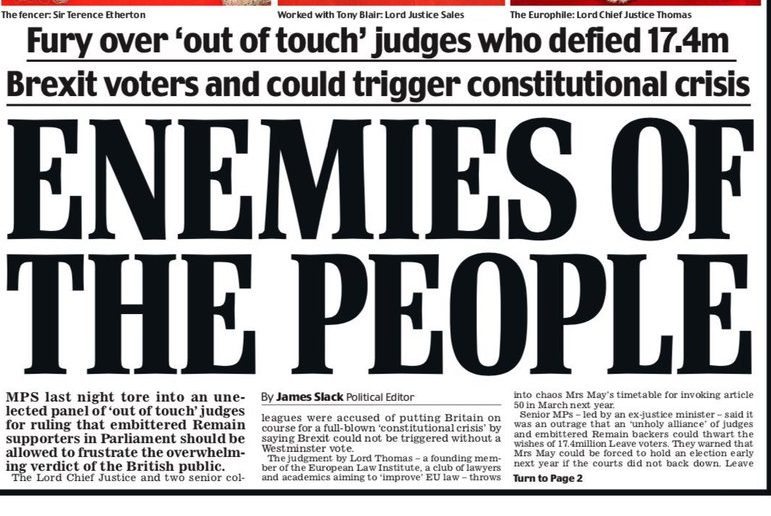 The High Court ruled on 3 November that Article 50 cannot be triggered without a vote in parliament. In response, The Daily Mail published a front-page headline declaring the three judges responsible “enemies of the people”.

'Enemies of the People' The Daily Mail sounds like a Soviet era Pravda newspaper. Show trials next? Very worrying. pic.twitter.com/obXvpVbFf6

Thankfully, Twitter was on hand to draw attention to the real enemies of the people.

Using the hashtag #enemiesofthepeople, hundreds of tweeters took the opportunity to instead air their gripes with everything from public transport users to the rising price of chocolate bars.

Those who think a casserole with a pastry lid qualifies as a pie. #EnemiesOfThePeople

People that put ketchup in the fridge #enemiesofthepeople

This light relief was welcome. Calling someone an enemy of the people is couched in the language of treachery and threats to security. It is worth remembering that, when Thomas Mair – the man accused of killing MP Jo Cox in June 2016 – appeared in court, he gave his name as ‘death to traitors, freedom for Britain’.

For other Twitter users, the hashtag was a chance to highlight what they see as the truly serious threats to the British people. Starting with The Daily Mail, of course…

The Daily Mail and right wing tabloids are the real #enemiesofthepeople

Those judges are not #enemiesofthepeople. Do you know who is our society's enemy? Rupert Murdoch.

The press that exploits the ignorance of the people it claims to serve in order to undermine the rule of law. #enemiesofthepeople

The #Brexit voters who claimed it was about sovereignty but now shout #enemiesofthepeople proving it was about racism all along!

The aggressive response to this court ruling from some is concerning for the many who can’t forget the way hate crime rose after the referendum vote. When passions are high, violence feels more likely.

At times like this, it’s important to remember who your real enemies are.

– Find out more about the High Court ruling.