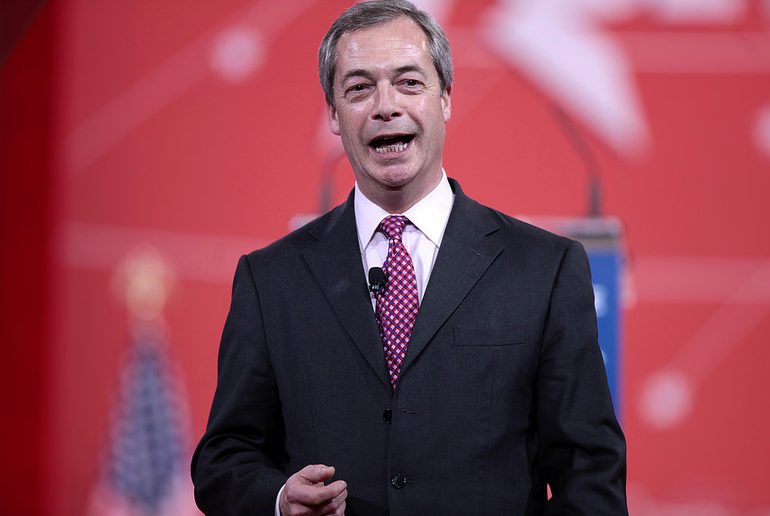 Nigel Farage is planning to make good on his claim that Leave voters will take to the streets, by leading a “100,000-strong” march to the Supreme Court on the day of the government’s hearing on Article 50.

The High Court ruled on 3 November that Article 50 had to be discussed in parliament before it could be executed. Many, including interim UKIP leader Farage, consider this an attempt to block Brexit from happening at all. He told Andrew Marr:

We may have seen Bob Geldof and 40,000 people in Parliament Square moaning about Brexit.

When Marr asked if this could mean “disturbances in the street”, Farage said “Yeah, I think that’s right”:

Of course, Farage has specified that this political anger should be “peaceful”. He said:

I’m going to say to everybody watching this who was on the Brexit side, let’s try to get even, let’s have peaceful protest and let’s make sure in any form of election that we don’t support people who want to overturn this process.

But the language surrounding Brexit is already so politically and racially charged that some people will no doubt be nervous. Gina Miller, who brought the case against the government to the High Court, has received a slew of racist and misogynist abuse, as well as death threats, as a result.

Farage himself has said that “the temperature of this is very, very high”. To commit to leading a march of 100,000 people in such a climate is certainly bold.

The 100,000 figure has come from the campaign group Leave.EU, which is organising the march. According to its spokesperson, the group’s millionaire backers Arron Banks and Richard Tice, alongside Farage, have “secured support from thousands of Leave voters” for the march.

They also have plans to crowdfund £100,000 from supporters to pay for barristers to represent Leave voters in court. On 3 November, their rallying cry on Twitter was ensuring “the democratic will of the people is respected”:

We're back in full swing to ensure the democratic will of the people is respected.

On 5 December, the date that the Supreme Court hearing is expected to start, they will do just that with Farage at the helm, in order to:

remind the Government, politicians and the establishment, including the court, that they cannot ignore the democratic vote of the people in the referendum.

According to the spokesperson, that includes “slippage on the single market”. Labour leader Jeremy Corbyn has already stated that he will not sanction Article 50 in parliament unless single market membership is included in the package.

Hopefully, on the day, the march will remain peaceful. But we’re sure there’ll be no trouble with Farage in charge.

– Read the rest of The Canary’s Brexit coverage here.