The Sun has launched a new campaign, and its hypocrisy is utterly mind-boggling [TWEETS] - The Canary 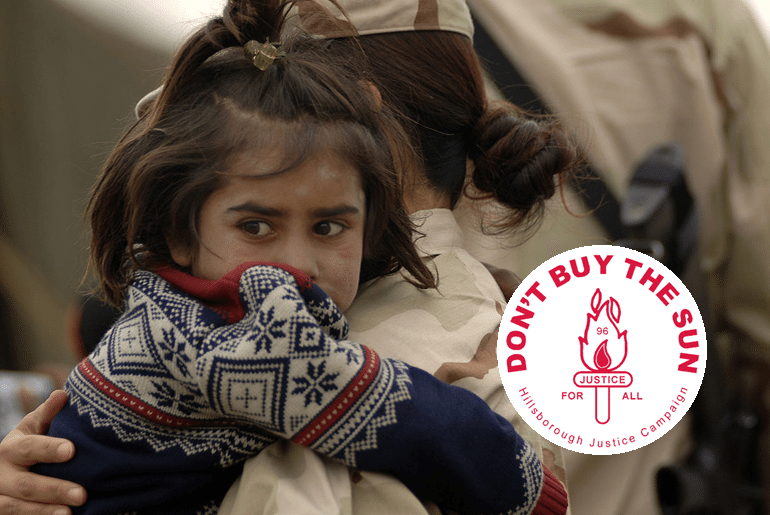 The Sun’s front page on 29 November launches an appeal for “needy kids”, including “kids fleeing the terrors of IS [Daesh] in Iraq”. But in the very same paper, an editorial calls for an end to the UK’s “foreign aid fiasco”.

The Murdoch Sun is so phoney, its running a campaign for child refugees, whilst its editorial is calling for the Govt to repeal foreign aid pic.twitter.com/iJGTKZJcXe

Unfortunately for The Sun, our memory is not as short as its own. It was only in October 2016 that its front page demanded TELL US THE TOOTH, with the paper leading the charge in questioning the ages of the child migrants given asylum in the UK from Calais.

THE SUN FRONT PAGE: 'Tell us the tooth' #skypapers pic.twitter.com/tr5xkwsJwB

It published multiple photos of the migrants as they entered the country, commenting on how old it considered they were. And it backed calls from MP David Davies to make the children undergo teeth examinations to “reassure” the British public.

This request received heavy opposition from the British Dental Association, which said:

It’s not only an inaccurate method for assessing age, but it is both inappropriate and unethical to take radiographs of people when there is no health benefit for them.

But this wasn’t enough to deter The Sun.

Of course, when they feature Hijram (who is 8 and has fled Iraq due to Daesh (Isis/Isil) terrorism) on their front page, the implication is clear; she is the right kind of child migrant. Specifically, one that is undoubtedly a child.

Tory MP Alec Shelbrooke summed it up when he said in October that he was expecting “children who look like children”. Expecting toddlers and babies to make that journey alone and start a new life in the UK alone seems unreasonable, but this was entirely acceptable to The Sun. So long as they weren’t teenagers who were especially tall or with “crow’s feet”.

But to launch a “Smiles at Christmas” campaign in the same breath as calling for an end to international aid might be the height of hypocrisy.

Britain gives 0.7% of its gross national income to foreign aid. Millions of pounds of that aid budget are spent on humanitarian support in nations from which many refugees – child or otherwise – are fleeing. The Week describes how, in 2015, £900m of the government’s aid budget was said to be spent on:

helping some of the four million refugees who have fled Syria since the war began. The vast majority of them are in refugee camps in neighbouring Turkey, Lebanon and Jordan and the need for humanitarian aid is constant. The funds have been spent on basic supplies such as water, food, medicine and shelter.

If The Sun opposes this work, how much can it really say it is committed to helping child migrants like Hijram? If it really wants to help refugees, perhaps its first move should be to stop contributing to a climate of hatred towards them.

– Support the work of Save the Children in supporting child migrants fleeing conflict.