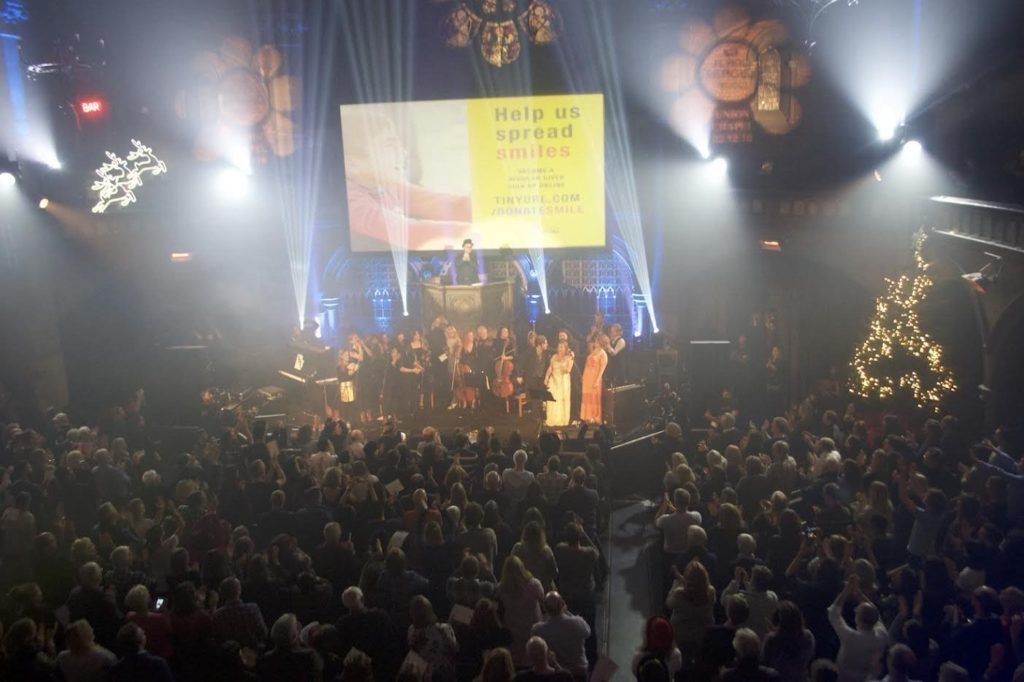 On Friday 2 December 2016, Charlotte Church led a cast of stars from the worlds of music and comedy, in a truly magical concert at The Union Chapel, Islington. The event, which was streamed live by The Canary, was organised to raise money for The Flying Seagull Project: a charity formed in 2008 to bring entertainment to children who are underprivileged, marginalised or suffering.

For this particular event, the focus was on those children fleeing war and other atrocities in their home lands. The performances were accompanied by heartbreaking footage on a backdrop screen on stage: footage highlighting the work the charity does, led by its founder, entertainer Ash Perrin. The audience got to see Ash and his team out in the refugee camps, making the children laugh, performing routines and magic tricks, playing and interacting with them personally. It was a heartwarming and humbling experience.

The entertainment itself was slick and engaging. Other than the odd microphone not being switched on and a troublesome guitar strap, the event went off without a hitch. Comedian Simon Munnery kicked off the evening, and had the audience laughing from the outset. What followed were magical performances from the musicians, most notably Mercury Prize nominee Ed Harcourt, who not only curated the evening, but accompanied most of the other artists on the piano as well.

As well as the maestro manning the piano, artists were backed by an impressive string section known as ‘The Dirty Pretty Strings’ – a female ensemble that brought a touch of ‘chamber music’ to proceedings. During the course of the evening, we discovered that no fewer than five of them were sisters. Two of them formed the musical act ‘Lock’ later on – performing a haunting composition entitled Paris to New York.

Among the other performances on offer, including dance-floor disco queen Sophie Ellis-Bextor, Carl Barât of The Libertines, The Magic Numbers, Tom McRae, and the inimitably charismatic Kathryn Williams, special mention must go to the former “voice of an angel”, Charlotte Church. She and her backing singers gave a close-harmony performance of Lauryn Hill song Ex-Factor – a rendition that completely wowed the audience. Church demonstrated a soulfulness and musical sensitivity that complimented the event perfectly.

In an emotional climax to the evening, all the performers and audience members joined together for a rendition of the late Leonard Cohen’s Hallelujah – the iconic and much beloved song previously covered by a host of artists, including the late Jeff Buckley, and in more recent years, X-Factor winner Alexandra Burke.

Posted by The Canary on Wednesday, 7 December 2016

The gig was everything I hoped and more, a total celebration of what the Flying Seagull Project does for these kids. Having empathy and compassion is the most important thing, trying to imagine what it’s like, the thought of my children being in a refugee camp, I can’t even bear it. Everyone singing Hallelujah at the end was just brilliant, an emotional finale to a fantastic event which will help The Flying Seagulls continue their incredible work.

In these dark and uncertain times, The Flying Seagull Project brings light and laughter to some of the most put-upon children in the world. That, I’m sure everyone can agree, is a beautiful thing.

The event’s organiser, Ash Perrin, offered his personal thanks to those who supported the event:

Those kids were laughing for hours, happy as beans in a can, because you guys chucked in a few quid or helped spread the word. That’s the whole reason we’re here, because happiness matters – yours, mine, theirs and everyone else’s. From them, and all my team, thank you.

We live in a society full of distractions. We become caught up with our own lives, our own families, our own priorities and goals. So it is inspiring to see organisations like The Flying Seagull Project out there, squaring up to the very real humanitarian crisis facing our world and attending to the emotional well-being of children our societies have virtually forgotten. The Canary is proud to support such a worthy cause.

– Become a supporter of The Flying Seagull Project.