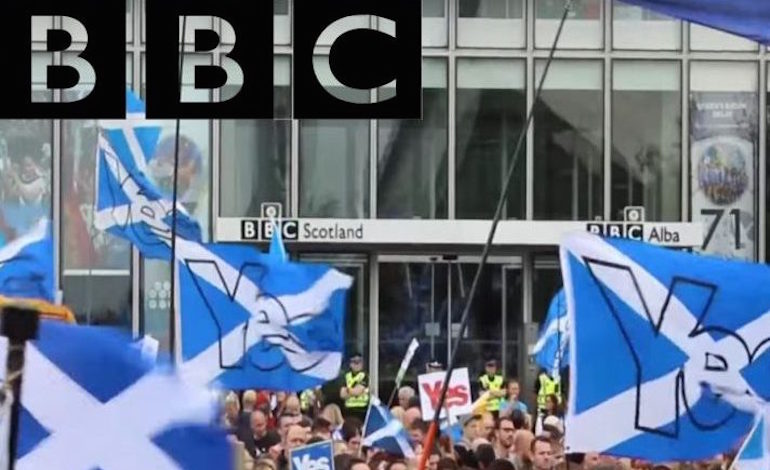 The documentary London Calling has to be seen to be believed. The film explores BBC bias, and the broadcaster’s alleged manipulation of the Scottish independence referendum in 2014. Many aspects of the referendum coverage were lesser known in England, Wales, and Northern Ireland due to regional programming variations. The documentary lifts that veil of secrecy. And over the course of 69 minutes, the involvement of the broadcaster begins to look quite shady indeed.

Originally funded through a crowdfunding campaign and shown at events hosted around Scotland by pro-independence activists, London Calling was released online for all to see in late 2016.

Craig Murray is a former British ambassador, a historian and writer, and former rector at the University of Dundee. His career as ambassador to Uzbekistan ended after only two years in 2004 when he made allegations concerning MI6’s use of information derived from torture. He continues to be a highly vocal critic of the Britain’s foreign policy, and published a book in 2007 entitled Murder in Samarkand – A British Ambassador’s Controversial Defiance of Tyranny in the War on Terror.

In the documentary, Murray explains that, during the referendum campaign, BBC Scotland ran no less than 18 headlines combining the word “independence” with the word “warning”. He comments:

Plainly that doesn’t happen by accident.

Misrepresentation, and membership of the EU

Jean Asselborn is Foreign Minister of Luxembourg. The BBC quoted him strongly warning against Scottish independence. The irony of course being that Luxembourg is a far smaller independent nation, and also highly commercially successful – despite not possessing Scotland’s natural resources. But the Luxembourg Embassy subsequently came forward and issued a statement directly calling out the BBC for its misrepresentation of Asselborn’s comments:

The BBC failed on this occasion to appreciate the nuance of Minister Asselborn’s quote and position. The quote was not one of opposition, but a call to all member states not to go their separate ways.

Focus on the man, not the issue

Critics pointed out much of the anti-independence ‘No’ campaign was solely focused upon “demonising” the then First Minister of Scotland, Alex Salmond.

British intellectual ‘heavyweights’ such as historian David Starkey were wheeled out in the media to describe Salmond as a “Caledonian Hitler”. Salmond was regularly mocked and antagonised in the press. And well before BBC Newsnight was superimposing baseball caps on Jeremy Corbyn’s head, the documentary suggests that the media had already tested the practice on Salmond: 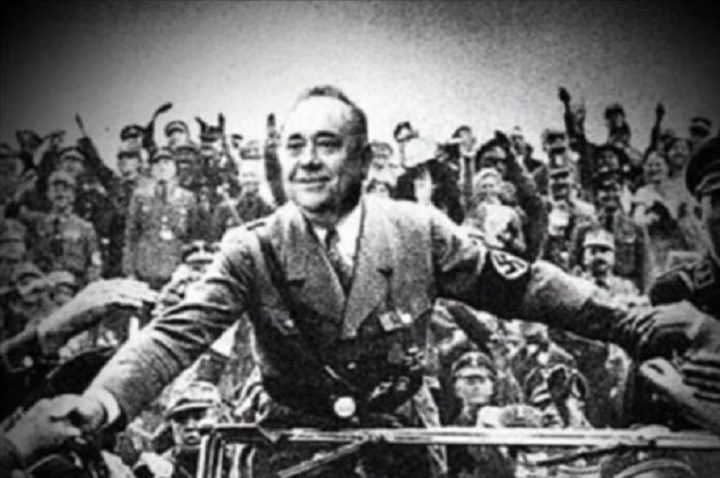 In an interview with Salmond, prominent BBC Newsnight host Jeremy Paxman openly belittles the Scottish First Minister on national television. After initially mocking him by appropriating the name ‘Moses’, Paxman bizarrely links Salmond’s aspiration for Scotland to be a “beacon of progressiveness” to the rhetoric of Zimbabwe’s Robert Mugabe. A somewhat bemused Salmond replies “I don’t think, Jeremy, you can do yourself any great favours by comparing Scotland to Zimbabwe”. He instantly snaps back:

No, I’m comparing you to Mugabe.

By any standards, that cannot be described as ‘impartiality’.

Later, we encounter BBC journalist Nick Robinson telling what has been interpreted by many as a pointblank lie. He claimed Salmond had offered no response to a direct question he’d personally asked him at a press conference. Salmond actually gave a “six-and-half minute answer”. The BBC edited it out of the footage. Robinson has since said he regrets the phrasing of the report.

The concept of ‘Astroturf’, and ‘Vote No Borders’

One of the most telling aspects of the documentary concerns the anti-independence “grassroots” campaign, ‘Vote No Borders‘. A group that seemingly emerged from ‘out of nowhere’ during the later stages of the run-up to the Scottish referendum. The film makes allegations of ‘Astroturfing’.

What is Astroturf? It’s a perversion of grass roots. As in fake grass roots. Astroturf is when political, corporate or other special interests disguise themselves, and publish blogs, start Facebook and Twitter accounts, publish ads, letters to the editor, or simply post comments online to try to fool you into thinking an independent or grass roots campaign is speaking.

The voice of the British establishment

The film astutely quotes the many key BBC figureheads who have direct links to this ‘British establishment’. Particularly within the Labour Party, which dominated Scotland prior to the success of the SNP. Individuals such as John Boothman, the former Head of News at BBC Scotland, whose partner Susan Deacon is a former Labour MSP and Health Minister. Or Tom Connor, the former Head of Online News for BBC Scotland, who provided training for Labour Party candidates. Sarah Smith, editor of BBC Scotland and daughter of former Labour leader, John Smith. Kirsty Wark, a close personal friend of former Labour First Minister, Jack McConnell.

These affiliations to the pre-Corbyn Labour Party are a conflict of interests, and the furthest thing from impartiality. Politicians and journalists are expected to publicise financial/business interests and investments, but career and familial ties are often overlooked.

These names are simply the tip of the iceberg.

One part of the film discusses the BBC’s amplification of violence committed by the ‘Yes’ campaign. The painting of enthusiasm for Scottish independence as ‘anti-English’, or even fascist in nature. When in fact, according to many interviewed, the reverse was more commonly the case.

For instance, the BBC reported on the violent confrontations in Glasgow the day after the referendum results, but only as mere “disturbances between supporters of independence and supporters of the union”. According to Paul Kavanagh, another contributor, that was not the case:

It was fascists who support the union, attacking independence supporters. That’s what happened.

Channel 4 News reported on the same event. But in contrast to BBC News, it reported George Square being charged by “loyalists”, and “people with pro-independence badges” being assaulted. Very different from the BBC slant of both sides being at fault, or what Kavanagh describes as “morally equivalent”.

Scotland paying for its own deception

Mark McNaught is a American lecturer at Rennes University in France. He describes the BBC licence fee as virtually a “mafia racket”. But that, in the case of Scotland, it has an even worse implication:

For there to be this extortion of money to fund something that people don’t like and many hold in deep deep contempt, in order to force them to pay it? I mean, that sounds pretty totalitarian to me. And then realising, at least in the context of the Scottish independence referendum, this money was going to London to be used to finance this propaganda to the Scots. So they’re using their own money to convince them that they can’t be an independent country.

Craig Murray, meanwhile, again goes on to describe how the BBC bias on the Scottish referendum now has a lasting legacy:

The Scottish referendum campaign showed up the BBC in its worst possible light for everyone in Scotland to see. And I think trust in the BBC in Scotland is now extremely low. But it did more than that of course, because in Scotland people could see there was a massive gap between what the BBC was reporting and the truth. People then suddenly realised, wow, maybe they’re not actually telling the truth about Israel, or Syria, or anything else? And so I think the scepticism in Scotland about the BBC now goes beyond the issue of independence.

The BBC stated during the referendum:

The BBC’s coverage of the Scottish referendum debate has been fair and balanced and we will continue to report on the story without fear or favour.

Faced with recent accusations of bias in Scotland, the BBC rejected suggestions that its coverage is partial. A spokesperson for BBC Scotland said:

We reject the suggestion that our coverage is partial…. Reassuringly, audiences continue to tell us that the BBC is still the news provider they trust most, while we take heart from the fact that Reporting Scotland is by far the most watched news programme in Scotland with around half a million viewers tuning in every night.

Scotland has a right to be angry. When the referendum seemed to be swinging towards independence, MPs from Westminster arrived by the train-load to counteract the momentum. They made promises of “Devo-Max” to the people of Scotland if they voted to remain. They promised independence in all but name.

Many Scottish voters were also concerned at potentially losing status as members of the European Union. The ‘No’ campaign used that fear to great effect. Scotland actively voted to remain in the EU only a year later, but the nation may now be dragged out of it against the will of the majority of Scottish voters, at the behest of England and Wales.

It must be a particularly bitter blow for many. They had a chance to set themselves free of English Tory rule, but now remain tied to the will of Downing Street. Scotland may or may not get another opportunity, but one thing is clear. When the UK government needs British people up and down the country to vote one way or the other, the BBC is its most effective and persuasive weapon.

Watch the full documentary below.

This article was updated on the morning of 22 January to include a quote from the BBC and remove one of the quotes from Craig Murray.

– Support the crowfunding campaign to get London Calling released onto DVD.

– Support our work at The Canary, so we can keep holding the corporate media to account.