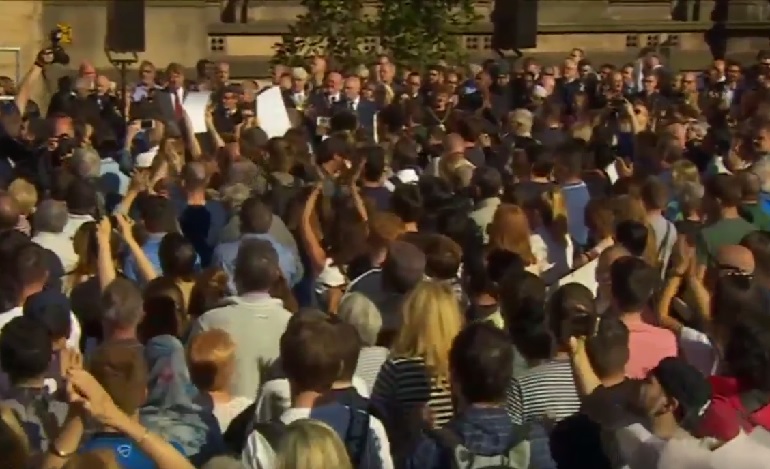 The 22 May terrorist attack was a tragedy. But if the response both locally and internationally proves one thing, it’s that you can’t beat the human spirit.

Even as the chaos was unfolding, people responded with compassion, solidarity and giving. Within minutes, locals were pledging support to emergency services. Both the Greater Manchester Police and the NHS received particular praise:

No matter what happens, the emergency services are always running head first into danger. Massive respect and thanks are needed for them all

Close behind were personal offers of help. Offers of lifts home, shelter and support poured in:

If anyone is needing to get back to Burnley or surrounding areas, message me and I'll come get you. #manchesterexplosion #ManchesterArena

Same here. In Liverpool, can give lifts either way. Please retweet and message me if you need help #liftManchester #RoomForManchester

Messages of support also poured in from all corners of the globe. German Chancellor Angela Merkel, for example, insisted that:

People in the UK can rest assured that Germany stands shoulder to shoulder with them.

At an evening vigil in Manchester on 23 May, meanwhile, thousands of people gathered to show the city’s resilience.

Thousands attended a vigil to commemorate the victims of the #Manchester bombing https://t.co/v0vxUgnMZq pic.twitter.com/Sjxki6zy8q

Manchester sets aside differences of 'background, religion, beliefs and politics' to champion love over hate at #ManchesterAttack vigil pic.twitter.com/zPOCszJRlj

An amazing, defiant poem read out during the Manchester vigil: https://t.co/8qt8OkuVTQ via @YouTube

And the best way to defeat hatred, division and fear is indeed to focus on the opposite sentiments. To foster more love, more unity, and more hope. Today, the people of Manchester demonstrated that spirit in droves. Tomorrow, we must all do the same.

– Be kind to each other. Show compassion. And stand with Manchester.

– Those who are concerned about loved ones or anyone who may have been in the area at the time of the 22 May terror attack can call this emergency number: 0800 096 0095.