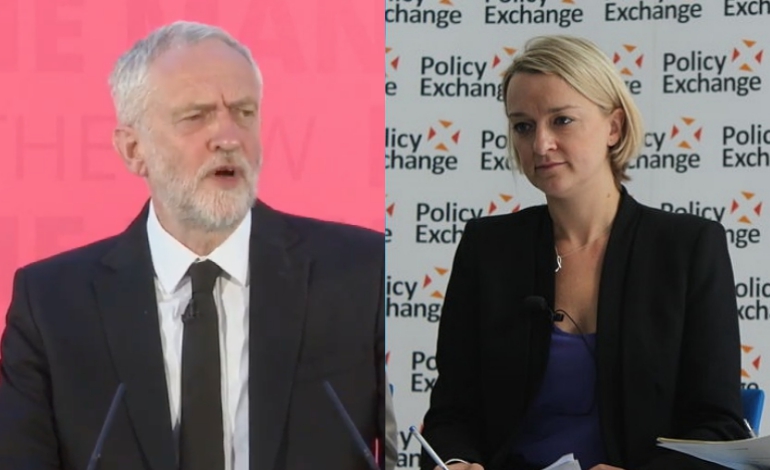 On Sunday 4 June, Jeremy Corbyn delivered the speech that could win the Labour Party the general election. Speaking in the aftermath of the London attacks, Corbyn laid the blame firmly with Theresa May. Not only for her cuts in policing, but for her cosy relationship with Saudi Arabia. The BBC, however, appears to not want to show it. Instead, the public broadcaster showed May’s full speech, while just including a snippet from Corbyn’s.

Corbyn started by having a minute’s silence for the victims, and expressing “love and solidarity” to the people killed and affected by the London attacks. And he praised the emergency services for their response.

But he also attacked the cutting of police numbers that he has repeatedly called May out on:

You cannot protect the public on the cheap. The police and the security services must get the resources they need. Not 20,000 police cuts. Theresa May was warned by the Police Federation but she accused them of ‘crying wolf’.

And he set out the clear choice voters are facing on 8 June:

The choice you face on 8 June is a Conservative Party which has made it clear that it will press on with another five years of austerity and cuts to essential public services to pay for even more tax handouts to the richest and the biggest corporations.

Or the Labour Party, which is guaranteeing that 95% of taxpayers will pay no extra tax, but is asking the best off and the largest companies to pay a bit more to fund our hospitals, police, schools, decent pensions, and childcare.

Corbyn also stated the difficult questions that need to be asked:

And yes, we do need to have some difficult conversations. Starting with Saudi Arabia and other Gulf states who have funded and fuelled extremist ideology. It’s no good Theresa May suppressing a report into the foreign funding of extremist groups. We have to get serious about cutting off their funding to these terror networks, including Isis [Daesh] here and in the Middle East.

These are incredibly difficult questions for May, and ones she would much prefer not to answer. After all, the Home Office has recently sought to suppress an inquiry into terrorist funding because it reportedly highlights the role Saudi Arabia plays in funding terror. And May is a strong supporter of Saudi Arabia, with her government recently approving £3.5bn worth of arms export licences.

Unfortunately, Corbyn’s speech was apparently not shown in full on the BBC, whereas May’s full speech was, as many on Twitter pointed out:

The Tory biased BBC shows about 1 minute of Jeremy Corbyn's speech but the whole of Theresa May's usual bullshit.

#BBCNews theresa May is given air time for her whole speech. Jeremy Corbyn has a quick couple of minutes of edited speech. What is BBC doing

WHAT WE DIDNT SEE ON BBC
Corbyn pays tribute to London attack victims and attacks May over police… https://t.co/4e6NA8LTYF via @YouTube

He also tried to counter perceptions that he is soft on security, including his earlier stance on shoot-to-kill, which he questioned days after the Paris attack at the Bataclan.

In fact, Corbyn’s shoot-to-kill policy hasn’t changed. Kuenssberg was found by the BBC Trust to have misrepresented Corbyn’s views. And Kuenssberg was found to have breached the BBC‘s impartiality guidelines with her coverage of Corbyn’s comments. But that doesn’t seem to have stopped her from continually repeating them.

But while the reaction from the BBC is disappointing, it is also unsurprising, given recent coverage. Despite this, Corbyn is showing that he is defeating the Tories in one of the areas where they are traditionally stronger – law and order. And it is telling that the party which brought us “strong and stable” and “magic money tree” accused Corbyn of:

There was nothing “desperate” or “evasive” about Corbyn’s speech. It was packed not only with empathy, but with clear policy commitments. On the other hand, May is desperate to curtail our freedoms over the concept of “extremism”, a term that she has repeatedly been unable to define. All while suppressing a report into the funding of terrorism and refusing to have those difficult conversations about the billions of pounds in arms sales that her government is authorising to Saudi Arabia.

This could be the speech that wins Corbyn the election. And we all need to make sure that, despite the BBC‘s best efforts, everyone gets to see it.