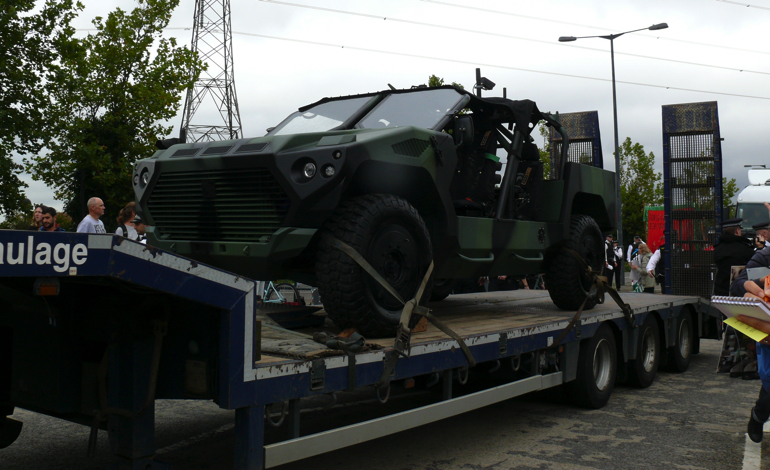 From 12 to 15 September, London will host one of the world’s largest arms fairs – where people from more than 120 countries mingle and make the weapons deals that fuel many of the world’s current military conflicts. But as weapons began arriving at the ExCeL Centre on Monday 4 September, activists were on the ground to make the deliveries a little less smooth. And police officers were there to watch, warn and arrest them.

As the Canary recently reported, London has hosted the Defence and Security Equipment International (DSEI) arms fair every two years since 2001. In 2015, 108 countries and more than 1,600 weapons companies attended – including all 10 [.odt] of the world’s largest arms companies. The UK government personally invited 61 of these countries. They included Saudi Arabia, Azerbaijan, Egypt, and Bahrain: all known human rights abusers that have used weapons on their own people (and in Saudi Arabia’s case, on Yemen‘s people).

This year’s keynote speakers include Defence Secretary Michael Fallon and International Trade Secretary Liam Fox. One of the only people in government who seems to oppose DSEI happening in London is Sadiq Khan.

In fact, the Defence & Security Organisation (DSO) – part of the Department for International Trade, with more than 150 staff – co-sponsors the event with the Ministry of Defence and UK organisers Clarion Events. The DSO exists to promote UK arms exports, part of a £70bn global industry where the UK is responsible [.odt] for 10%.

Along with the UK, the world’s biggest arms exporters are the US, France, Russia and Germany (representing, without Germany, four of the five permanent members of the UN Security Council). The world’s main arms importers, meanwhile, are India, Saudi Arabia, China, United Arab Emirates, Australia and Turkey.

The DSEI is truly a ‘who’s who’ of military participants.

On Monday, about 100 activists came to east London to block the two vehicle entrances to the ExCeL Centre. 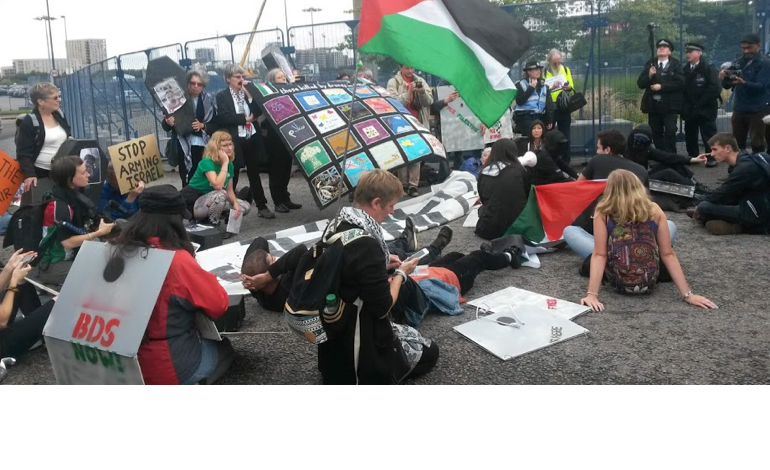 ‘Stop Arming Israel‘ – the first day in a week of actions organised by Stop the Arms Fair, London Palestine Action, Campaign Against Arms Trade (CAAT), and others – focused on solidarity with Palestine and on Israel’s role as a producer and user of weapons. 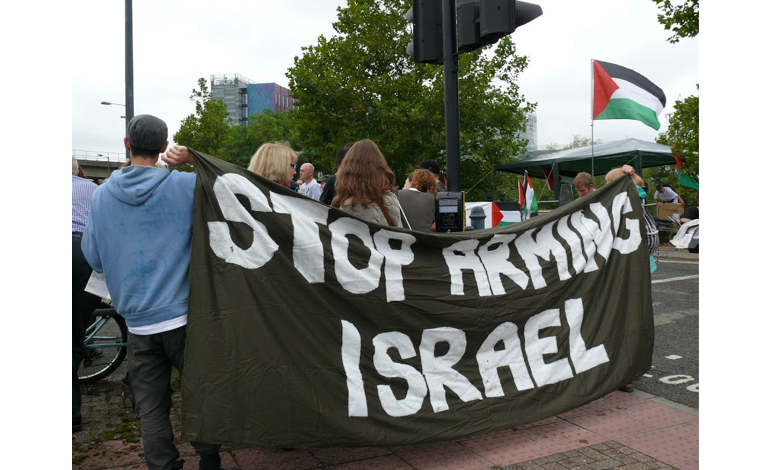 CAAT spokesperson Kat Hobbs told The Canary that the policing was “a bit more intense than it was in 2015”. Six people were arrested for ‘obstructing the highway‘, and two of them released.

She also said that the day’s first arrest, made around 10.45am, was “quite blatant police racism”:

They arrested a photographer, a black man who was here, who was not doing anything different to anyone else on the rest of the road.

CAAT had hired the man to document the week’s actions.

Police also arrested a female priest, and a woman who slid under an armoured vehicle on a delivery truck headed toward the ExCeL Centre. 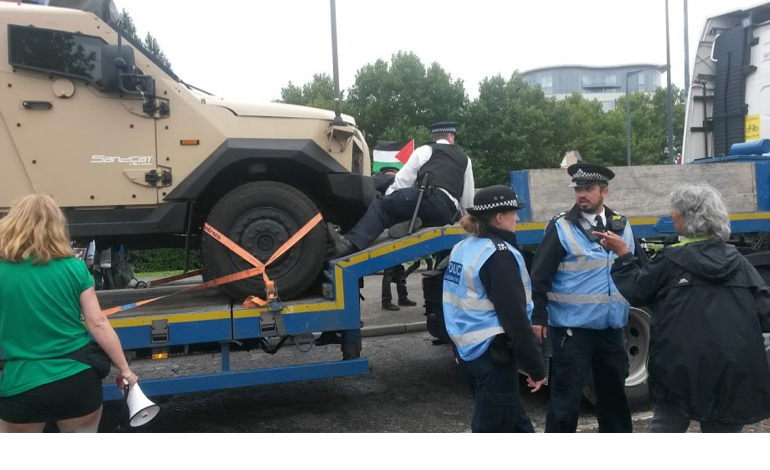 Activists identified the vehicle above as a ‘SandCat‘, part of a “family” of 4x4s made by Israeli defence company Plasan Sasa Ltd. (and reviewed by Top Gear in 2016). 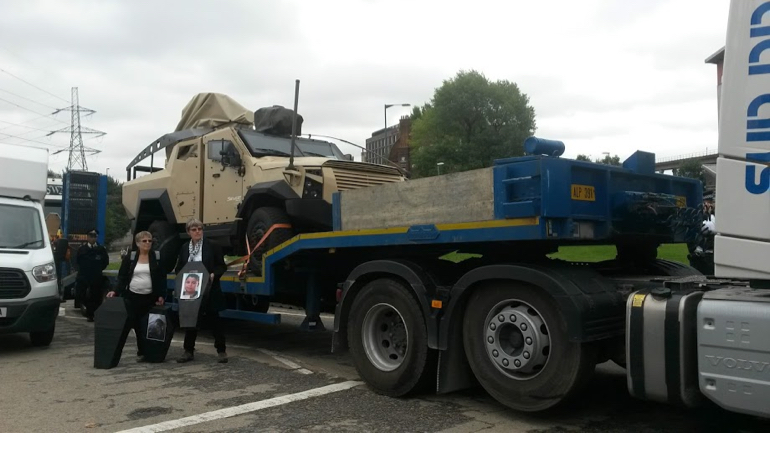 Plasan has subsidiaries in the US and France, including a joint venture with Q-Flo Ltd., a company with ties to the University of Cambridge.

Israel has had an illegal military occupation of the West Bank since 1967, and a blockade of the Gaza Strip since 2007, affecting 4.4 million Palestinians. And Hobbs told The Canary that DSEI gives Israel a forum to tout weapons which have been “battle tested” on Palestinians:

Israel hosts a large national pavilion, which means that they can bring senior military personnel, government figures, and… Israeli arms companies get to advertise their ‘battle tested’ weapons as a national brand.

We know that Israel uses Palestine as essentially a testing ground, a laboratory for new weaponry which it can then export around the world. And that money goes back into the occupation.

Hobbs told The Canary that the face-to-face time at DSEI – from private breakout rooms to drinks events – is crucial to the military and government officials and weapons companies taking part in the arms trade:

Arms fairs exist so that buyers can form relations with companies, can get up-close with the kit. If you are one of the military buyers attending DSEI, you can have a tour of the warship, you can get behind the controls of a tank, you can go into one of the private side rooms and drink champagne with some of the arms-industry executives that you’re going to be dealing with and striking these really big deals… The kind of handshakes and relationship-building that happen at the DSEI arms fair is how arms sales happen.

Not in our name

The government, however, seems to have missed that memo – or blatantly disregarded it.

Featured images via the author