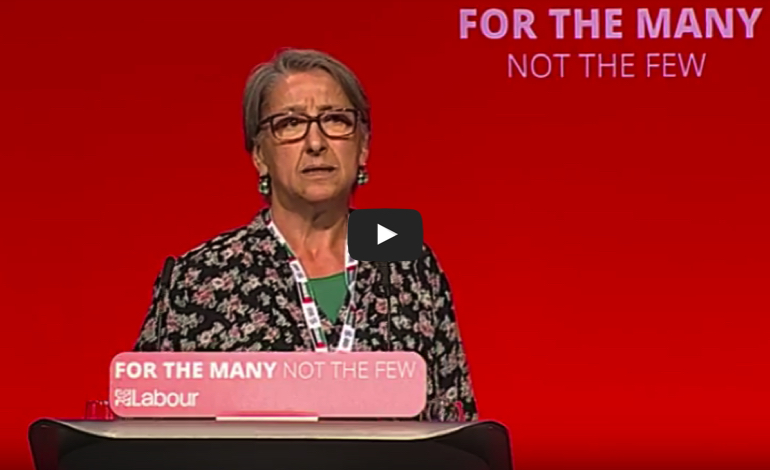 A new movement in the Labour Party launched at the Annual Conference on 25 September. And in just a few days, it made itself known in a big way. Its delegates got standing ovations for their speeches, and two major unions have already backed it.

Jewish Voice for Labour (JVL) is anti-racist, and sees Boycott, Divestment, Sanctions as a legitimate rather than antisemitic tactic. And with a controversial rule change on antisemitism passing, JVL has established itself as a timely “force to be reckoned with”.

More than 200 people came to JVL’s launch. At the event, Len McCluskey said that Unite – the country’s biggest trade union – will affiliate with JVL. The head of ASLEF also pledged the rail union’s support.

McCluskey said that Unite was supporting JVL because:

Left-wing Jewish members of the party have needed a voice for long time… The existence of JVL means Jewish members on the left of the party now have an organisation that represents their views – and that transforms the discussion into one of left vs right as it should be.

But at the same time, Labour is investigating how the party let in a speaker who reportedly said, at a fringe event, that free speech should include questioning if the Holocaust happened. And the Equality and Human Rights Commission said that, on antisemitism, Labour “needs to do more to establish that it is not a racist party”.

These incidents have added fuel to the fire for those arguing that Labour is an antisemitic party.

Before the conference debate on amending Labour’s rules on hate speech and discrimination, Hastings & Rye Constituency Labour Party (CLP) was reportedly asked to withdraw its proposed rule change on antisemitism. Jeremy Corbyn, the NEC and Momentum had backed the motion by the Jewish Labour Movement (JLM) instead.

Hastings & Rye CLP did what it was asked. And the motion passed with 96% of votes.

In response, a JLM spokesperson told The Canary:

This was a decisive political victory. It brings the Labour Party, the Party of equality, to the place it should have always have been in with a set of rules that are fit for dealing with antisemitism and other forms of discrimination.

It is heartening that the proposals tabled by JLM received backing and support from all sections of the Party. The proof of the pudding will be in the eating. We will be monitoring the Party’s progress in implementing these changes.

But before the motion passed, one delegate took an attention-grabbing stand.

On 26 September, Leah Levane from Hastings & Rye CLP gave a speech at the conference that went viral. She gave voice to Labour members, both Jewish and non-Jewish, who see a difference between criticism of Israel and antisemitism and want to allow for legitimate criticism to keep taking place.

And she got a standing ovation for it:

‘They do not speak for me’

Speaking about the Labour conference, JVL spokesperson Mike Cushman told The Canary that:

The impact of JVL was not only at the fringe of conference. Leading JVL members Naomi Wimborne-Idrissi and Leah Levane roused conference to its feet with their calls for justice and peace in Palestine and for just procedures inside the Labour Party.

JVL applauds the Labour Party’s renewed concern with combatting discrimination within the Party and in wider society. JVL recognises this has been central to Jeremy Corbyn’s entire political career. While the rule change adopted avoids some of the worst features of other proposals circulated, JVL is concerned that the rule change adopted may not be effective in advancing this cause. Our anxieties are around four issues.

JVL told the The Canary it is concerned that:

Given the concerns about antisemitism in the party, action on antisemitism should be welcomed. But now, Labour has changed its rules on hate speech and discrimination in a way that could lead to more members getting suspended or excluded. Some people had voiced concern that this change was part of a “witch-hunt for political purposes”. That is, to destabilise Jeremy Corbyn’s leadership of the party.

So now that Jewish Voice for Labour exists, it could help balance debates on free speech and hate speech. And allow voices to keep speaking up against oppression, without oppressing other people in the process.

Correction: This article was updated at 1900 on 27 September to make JVL’s position on Boycott, Divestment, Sanctions (BDS) clear. It previously incorrectly stated that JVL supports BDS.