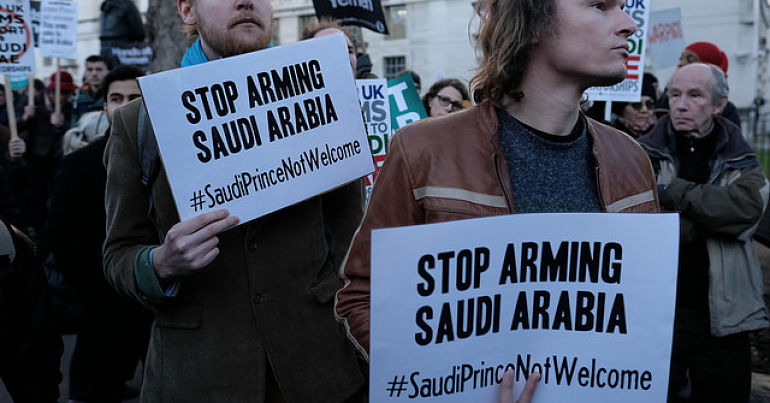 As The Canary previously reported, this government has effectively laid out the red carpet for bin Salman since his arrival in the UK on 7 March. His regime has been accused of, among other things, unlawful air strikes on civilians in Yemen. People have protested against the fact the UK government is entertaining the prince. Some are also saying, due to its arms sales, the UK is complicit in Saudi Arabia’s alleged war crimes:

Britain selling fighter jets to Saudi Arabia that will be used to strafe & bomb civilians in Yemen and other countries goes beyond immoral it makes us participants in war crimes just like I.G. Farben was by selling zyklon b to the Nazis. https://t.co/keHryKhH79 #SaudiCrownPrince

Bin Salman’s PR team has been hard at work since his arrival in the UK. Buses emblazoned with the message “#Welcome Saudi Crown Prince” were seen driving around London:

Britain getting ready to welcome #saudi crown prince! What a disgraceful sight to see in the streets of #London. But understandable since that the British are the reason behind the existence & the survival of this damn family of degenerates. #yemen #SaudiPrinceNotWelcome #uk pic.twitter.com/OZVVZiEDlk

Even the Guardian ran adverts, to the dismay of some of its writers, stating that bin Salman is “bringing change”.

And Conservative MP Crispin Blunt went on BBC Radio 4 to defend the government’s welcome of the prince, despite agreeing that there is a “humanitarian catastrophe in Yemen”.

If you're looking for a definitive example of what the phrase "ethically bankrupt" means in a political context, this is useful material. A masterclass from @CrispinBlunt MP https://t.co/1v48gXJqyT

Not what it seems

But this propaganda machine has been in action long before bin Salman’s visit. Bin Salman has vowed to return Saudi Arabia to “moderate Islam”. Senior Conservative ministers have celebrated this. Liam Fox, secretary of state for international trade, wrote about bin Salman’s new vision in the Evening Standard:

As well as measures to diversify the economy, this vision includes reforms to government bureaucracy and raising women’s participation in the workforce. This represents a huge step forward and would have been unthinkable until only recently. It deserves our full support.

However, this new “vision” has not stopped the Saudi Arabian government executing its own citizens. Anti-death penalty group Reprieve states that executions in the country have doubled under bin Salman’s reign. Furthermore, Save the Children chief executive Kevin Watkins has warned that Saudi armed forces are “targeting children” in Yemen with a “growing sense of impunity”.

The Conservatives have latched onto this new “vision” but it doesn’t make these arms sales more palatable. Because the UK is supplying weapons to a regime that is killing innocent civilians. People have a right to be sick to their stomachs.