Until elite universities give up on the patriarchy, women will keep being short-changed - Canary 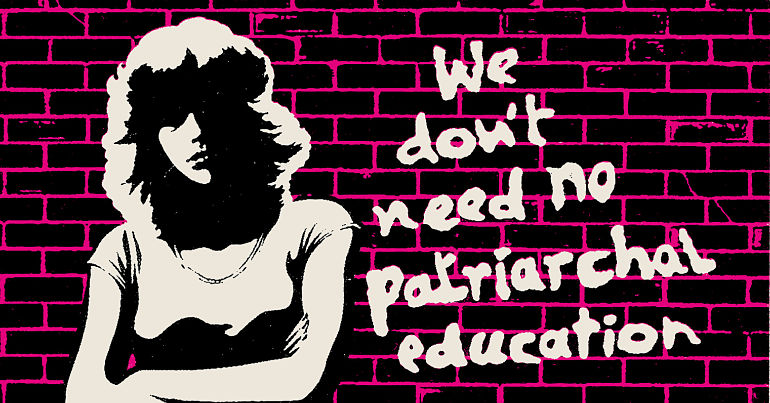 Q. How many Oxford dons does it take to change a light bulb?

On Thursday 15 March, The Telegraph reported that 40% of the reading for Oxford University philosophy courses should be authored by women. The faculty has also said that reading lists will use first names so it is clear which authors are female. And, for the first time, it is offering an undergraduate course in feminist philosophy.

Hanging on to the patriarchy with all its might, The Telegraph calls this “feminising the curriculum”. Rather than, you know, redressing the balance. And the university shows no signs of letting go either.

The philosophy faculty is not alone in its concern for female students though. Everyone now has 15 minutes more for exams in Maths and Computing and one final exam in History has been converted to a “take-home” paper. So is it more time or less time in the examination halls that we women need to succeed? Who knows.

For an institution that has had a seemingly intractable gender gap for a very long time, this is just not good enough. What is needed is a paradigm shift in culture. And this change is needed everywhere.

Unfortunately, those who might lead the charge are just too pampered by the patriarchy to be tempted to rock the boat.

While I was a student at Oxford, the Master of my college wanted to use several thousand pounds of college money to re-enamel his bath. I’m not even joking. If memory serves, the student body suggested a few cheaper alternatives to prevent or soothe a scratchy bum and the whole thing went away.

The Canary contacted the university for comment on recent efforts to improve equity for women and minorities. They provided the following by email:

A university spokesperson on feminist philosophy:

We think it is important to raise the status of feminist philosophy, which is an important and growing branch of philosophy, and to encourage more female students to take up the subject.

So, if we give women some women’s stuff to think about, they’ll be more likely to apply? Yes, okay, fine, but if the atmosphere is so toxic when they get there that they are unable to thrive, what’s the point? If this is the faculty’s most eminent thought on the matter, they are truly failing.

So said a frail Barbara Castle, as the former cabinet minister grabbed my elbow. It was 2001 and we were celebrating just 21 years of women being allowed to study at Balliol College.

Castle was a giant of British politics and, had Labour held on to power, she might have beaten Margaret Thatcher to be the first female prime minister of a UK government.

Back in 2001, surrounded by portraits of old white men, Castle drew her tiny 91-year-old self up at high table. She loomed like one of the famous gargoyles surrounding the Sheldonian theatre. Castle warned that for her generation it wasn’t so much that “behind every great man there stands a woman” but “behind every great woman there stands a tolerant husband”. I’m paraphrasing of course, but you get the gist.

Castle’s speech left me with hope that equity for women and minorities was possible at Oxford. But it also reinforced my belief in a reality where, honestly, we were still very much swimming up the proverbial creek and hoping a rich white man might throw us a spare oar the boat race crew no longer needed.

It was around this time that Oxford psychology professor, Jane Mellanby, began investigating the gap in finals results at the university.

Why do men gets firsts and thirds and women get 2:1s?

In 2000, Mellanby published an article in the British Journal of Psychology. She concluded that the gap was not down to any fundamental psychological differences between men and women. Instead, it was likely to be due to a system that favoured those with stronger verbal reasoning skills.

What does that mean? Essentially, if you can confidently argue a position, referring to appropriate evidence, you’re much more likely to get top marks. If you go in, as many women do, thinking that you have to prove what you remember of your lectures, you’ll come under time pressure and will lose marks for waffling.

The thing is, women are very able to communicate in that way. But there are reasons that we don’t.

When I looked at the breakdown of my results, I got what I’d been missing. It all started when I had an “attack of the fuck-its” during one of my last exams.

I’d become bored with dumping every snippet of lecture material I could remember on the page and hoping for coherence. So I honed in on a topic, in my plant biochemistry exam, that I was truly passionate about.

I wrote about Margaret Beckett‘s role as environment minister overseeing the public debate about GM crops, also known as “GM Nation“. Of course I included reference to some relevant research in plant biochemistr,y but only where it supported my policy arguments. I hadn’t actually been taught much of what I wrote about – my borderline obsession with public opinion on GM crops started years before – but I was confident in my position and argued it well. Somehow, I’d cracked it. I finally broke into first class territory after four years of imposter syndrome.

So what does it really take to get a first at Oxford?

By 2013, Mellanby had concluded that men get firsts because they believe they can. But it’s not down to generally high self esteem – in fact, if you have a very high opinion of yourself, you’re more likely to crash and burn at Oxford.

What I take from Mellanby’s work is that success stems from self belief, willingness to take risks, and the ability to argue well. And it isn’t just that women arrive with the best part of 20 years living in patriarchal societies that beat, sometimes literally, these traits out of them. Mellanby’s work suggests there is actually something about the atmosphere at Oxford that causes or perhaps worsens women’s weak belief in our academic ability.

“Something really ought to be done about women!”

Meanwhile, in 2010 I was invited to an event [pdf, p6] as an “old member” (feel free to snigger) with an interest in equity for women. I also have a little academic expertise  – I wrote my MSc dissertation on the under-representation of women in science. So off I went, back to Balliol, to join a group of current and former students and faculty to look at the issue of gender in the admission and examination of students.

Nine years after my encounter with Barbara Castle, “The Master’s gender seminar” (yes, really!) celebrated 30 years of women at Balliol. My blood pressure was at an all time high by the end of the day. Despite my protests, we were told that there were problems with women and women were problematic. In particular:

These problems, or versions of them, have been proposed by academics since 1965 when second wave feminism emerged. People began considering the possibility that not having women in academia might be a bad thing. We’ve done a lot of things and made a lot of laws since then, yet in many ways nothing has changed.

Time for a new conversation

For over 50 years we’ve been having this same conversation. Can we just stop now, please? Can we agree that diversity makes academia stronger and that giving up a fancy bath or two is a small sacrifice toward the ultimate success of many very worthy aims.

Stop telling us that women are the problem and start asking: “What is it like to be a woman here?”. Jane Mellanby’s work proves that we need to ask that question. But to actually effect change, straight, white, able-bodied, middle-aged men might just have to hand back a little of the power they are hogging. Otherwise the game will always be stacked against women and minorities at Oxford, no matter how many women are on the reading list or in the lecture theatres.