'Every time I get my budget my heart stops'. A headteacher exposes the reality of school funding cuts. - Canary 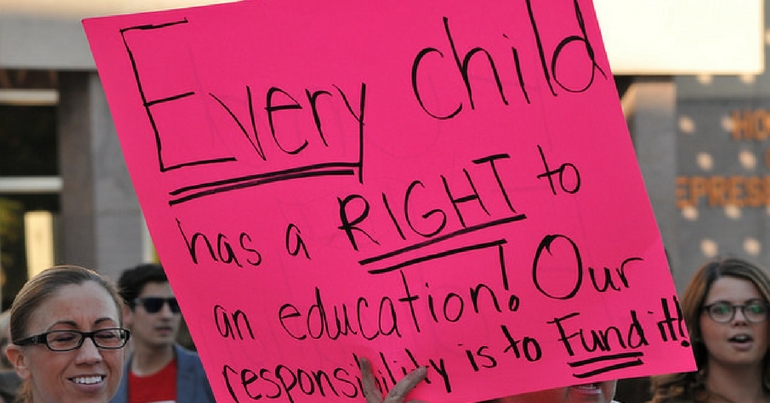 A headteacher has exposed the impact of cuts to school funding on children with the greatest needs. On 16 March, Siobhán Lowe headteacher of Tolworth Girls’ School in Surbiton, spoke on the BBC Radio 4 Today programme. She had been invited to respond to a new report by the Education Policy Institute (EPI) about funding pressures on schools in England.

The report [pdf, p5] found that in the four years up to March 2017, the number of local authority maintained secondary schools in deficit almost trebled. And in 2016/17, more than two-thirds of these secondary schools overspent.

Tolworth Girls’ School is an academy (funded directly by central government), rather than a local authority funded school but it is still facing huge funding pressures. A January 2018 report from accountancy network Kreston UK shows [pdf, p10] that 80% of academies are in deficit.

Every time I get my budget, my heart stops… It then beats incredibly fast and I then look around at my staffing and my resources and I think, what can I cut next?

She talked about having to make cuts to staffing for students with mental health issues or special educational needs. There are problems with wear and tear of buildings. And recently, students pleaded with her for GCSE and A’ level textbooks – but there’s no money to buy them:

There is more money going into our schools in this country than ever before. We know that real-terms funding per pupil is increasing across the system, and with the national funding formula, each school will see at least a small cash increase

But shadow education secretary Angela Rayner immediately disputed [pdf] this. And it turned out that Hinds was wrong [pdf] on two out of three of his claims.

In response, Rayner said that the education secretary:

…seems to need reminding that the mere repetition of a falsehood does not turn it into the truth.

In fact, real-terms funding is set to stay roughly constant over the next two years. But pressure on school budgets is rising because of funding cuts in other areas. And some non-academy schools could actually see budget cuts because funding is determined by their local authority

The National Education Union also pointed out that inflation, plus higher employer National insurance and pension contributions, will mean that many schools will actually experience a cut in funding. And education unions have launched an interactive website which shows the expected cuts in funding of every school in England and Wales up to 2020.

Around 2 in 5 state-funded mainstream schools (around 7,500 schools) are unlikely to receive sufficient additional funding in 2018-19 to meet the single cost pressure of a 1 per cent pay settlement. This rises to nearly half in 2019-20 (close to 9,000 schools).

It goes on to say that around two-thirds of school spending is on education staff. Therefore, many schools are unlikely to be able to fund a pay increase without cutting staff. This is the reality of the education system today. Children with mental health issues and special needs are being made to pay for the Conservative obsession with ‘austerity’. And it’s only going to get worse.