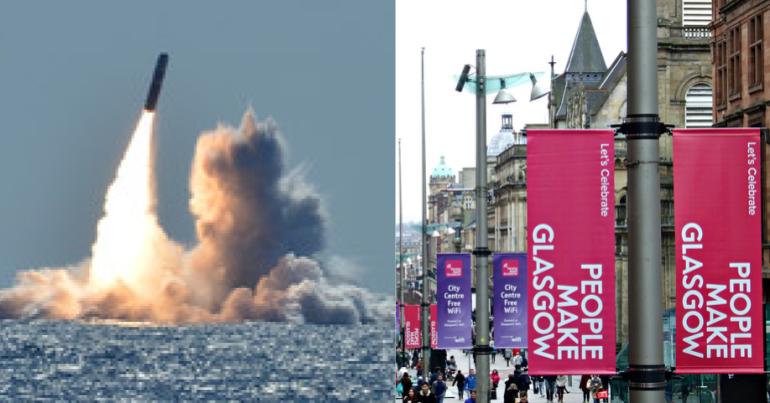 Glasgow City Council has links to an arms event which campaigners have called a “Trident showcase”. The council has confirmed its support for the event, which is set to be held in the city in June.

The Canary has found links between the Undersea Defence Technology (UDT) 2018 conference and the charity Glasgow Life. Glasgow Life is an ‘arm’s length external organisation’ (ALEO) which runs services on behalf of Glasgow City Council. Several councillors sit on its board.

Listed as a supporter of the exhibition is People Make Glasgow, a brand name of Glasgow Life. Campaigners have raised serious concerns about the use of the charity to legitimise the arms event, which they have called a “Trident showcase”.

BAE Systems and Babcock International are spearheading the new fleet of Trident nuclear submarines. Both are major exhibitors at the UDT event.

Glasgow City Council also has 90% ownership of the Scottish Events Campus (SEC), which will host the exhibition. The SEC website does not list UDT in its upcoming events.

The SEC lies in central Glasgow, just 25 miles from Faslane Naval Base. The UK’s nuclear weapons have been based at the site since the 1960s. The council has defended support of the UDT event.

UDT hosts large scale underwater arms events in Europe and Asia. The three-day conference will take place from 26 to 28 June and feature some of the world’s largest arms producers.

Over the past two years, several governments accused of human rights violations have attended UDT events. These include Indonesia, Thailand, and Israel.

UDT exhibitors Lockheed Martin, Leonardo, and BAE Systems are all major suppliers to the Israel Defense Forces. BAE, the event’s lead sponsor, also supplies the Saudi Arabian regime. On 22 April, at least 20 people were killed as a Saudi-led airstrike hit a wedding in Yemen – and dozens more died over the weekend.

The UDT conference was previously held in Glasgow in 2008. The exhibition is run by Clarion Events, which also boasts arms fairs such as DSEI and the International Summit on Borders in its portfolio.

The People Make Glasgow brand name came into effect in the run up to the Commonwealth Games. Throughout the city centre are banners and signs carrying the distinctive logo.

Glasgow Life aims “to inspire the city’s citizens”. It encompasses Culture and Sport Glasgow and manages the Glasgow Convention Bureau (GCB), which is supporting the UDT event.

Responding to questions from The Canary detailing campaigners’ concerns, head of conventions at GCB Aileen Crawford focused on the potential economic benefits to the city. Crawford said:

Last year, Glasgow hosted more than 500 conferences, which brought £130m to the local economy. In recent years, the UDT conference has been hosted in major cities including London, Oslo and Liverpool.

The conference will bring more than 1,000 delegates to Glasgow with an estimated economic benefit of £1.2m for city – helping to secure jobs across our hospitality, transport and retail sectors.

In October 2016, the UK government committed £1.3bn of funding towards the new fleet of Trident carrying submarines. Two of the three major companies contracted with building the undersea vessels are BAE Systems and Babcock International.

Campaigners have branded the event, which lists Babcock as its innovation partner, a “Trident showcase”.

A spokesperson for Campaign Against Arms Trade’s Edinburgh branch told The Canary:

We are shocked that People Make Glasgow are supporting an arms fair in their own city.

Given the historic anti-Trident movement in Glasgow, it’s very disappointing that the council has given its support to the event. We hope groups across Scotland will come together to oppose this Trident showcase.

All but two of Glasgow’s 23 elected members in both the Scottish and UK parliaments represent parties which oppose Trident renewal. Over 90% of the city’s councillors also represent parties committed to opposing the UK’s nuclear weapons systems. A minority SNP administration runs the council.

A spokesperson for UDT told The Canary the exhibition “will not feature the Trident replacement programme”. Instead, the spokesperson said the event will bring together figures from military, academia, and the “legitimate defence industry”.

The Dreadnought fleet of submarines will host the UK’s nuclear weapons from 2030.

Responding to concerns surrounding the event, Glasgow City Council backed the decisions made by the convention bureau. A spokesperson for the council told The Canary:

Glasgow’s highly successful convention bureau works with venues and event organisers to bring conferences and exhibitions to the city – generating around £130 million for the local economy each year and supporting thousands of jobs, most notably in the hospitality, retail and transport sectors.

This particular event was held in Glasgow in 2008 and has visited a number of major European cities since, including London, Liverpool, Hamburg and Oslo.

While the council continues to focus on the money, the reality of the conference is unlikely to go unnoticed. The west of Scotland has been home to several large anti-Trident demonstrations in past years. The campaign ‘Bairns not Bombs’ was one of the drivers of the city’s ‘yes’ vote in the independence referendum of 2014. So if people really do make Glasgow, they may not wish to be the face of an event such as this.