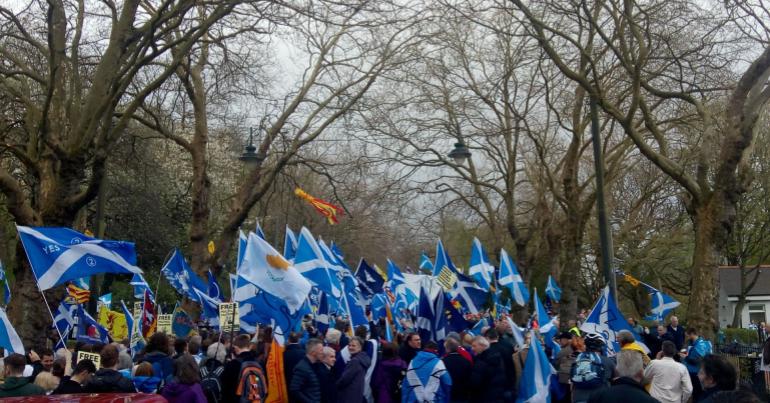 Tens of thousands of people took to the streets of Glasgow yesterday in the biggest ever independence related march in Scotland.

Supporters travelled from all across the country to join the march called by grassroots pro-independence umbrella group All Under One Banner (AUOB).

Official police estimates put the number of marchers at 35,000, while organisers said there were as many as 90,000 people. It was the largest march in Scotland since the Iraq war protests of 2003.

Leaving Kelvingrove Park, the procession weaved through the city centre streets before converging at Glasgow Green. The roads of Scotland’s largest city were brought to a halt, with numbers exceeding organisers’ expectations.

Cries of “Tories Out” could be heard all along the route, with drum bands and bagpipes scattered throughout the endless stream of people. From the point the front of the march arrived at the green, it was over 45 minutes till the flow of blue and white clad marchers ceased.

Open-top tourist busses revelled at the sight of the saltires and kilts. And while some pockets of opposition were visible at two or three points along the route, the general mood was one of cheer. One newly married couple even ended getting caught up in the spirit:

“The only dangerous minority is the rich”

Much is made of numbers at these events and conflicting estimates are no surprise. Supporters and photographers clamoured for the best spot to get a shot of the crowds along the route:

One of those to be caught by surprise was comedian Jason Manford. Livestreaming from his hotel window, Manford recruited his daughter to count the numbers attending. Although her total of 18 was certainly at the lower end of the estimates offered:

In the video, Manford reads a sign proclaiming ‘the only dangerous minority is the rich”, before adding, “yeah, can’t argue with that”.

Others used more scientific measures, such as drinking time, to gauge the numbers:

I am on the AUOB march but had to stop off in the Griffin Bar for some medicine due to a bad back.

But the photos of the crowds spoke for themselves in the end:

Despite the SNP losing ground in recent elections, the march on 5 May showed that there is still strong support for the independence movement.

What makes the numbers on the march so impressive is that a large body like the SNP was not behind it. Nor was the protest organised through trade union ranks. It was a meeting of grassroots organisations.

Theresa May has batted away talks of a referendum. The Brexit debacle has been used as a weapon by both sides of the divide. But the strength of feeling amongst many in Scotland still remains, as shown by the tens of thousands calling for another vote. It seems it’s only a matter of time before the inevitable happens.