Amber Rudd is my MP. Her latest publicity stunt is hilariously embarrassing. - Canary 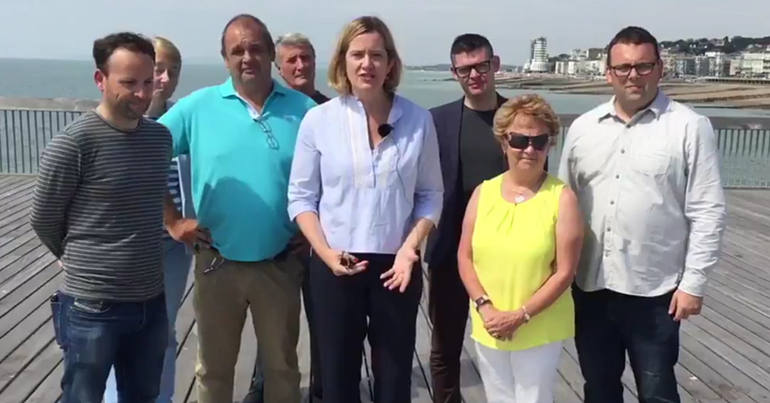 Former home secretary Amber Rudd just made the most cringeworthy political video ever. Please: don’t watch it while you’re eating.

Rudd made the video during shadow chancellor John McDonnell’s visit to her constituency of Hastings. He was launching Labour’s plan to devise local solutions to the economic problems of towns that have been “left-behind”.

Hundreds from across the Hastings & Rye community are here today with @johnmcdonnellMP to discuss how we can get the local economy back on track #ForTheMany #Labour pic.twitter.com/XDoXwGUMoJ

Miffed that Labour should suggest things aren’t all rosy in Hastings, Rudd gathered seven Conservatives (perhaps all she could find) and marched them to the recently privatised pier to make a video. The message? Everything in Hastings is lovely because of the Conservatives:

Delighted to welcome @johnmcdonnellMP to Hastings and set him straight on the facts. #lovehastings pic.twitter.com/qkdmpb4gyO

I’m concerned that the points you’re making, about towns being left behind, are nothing to do with Hastings. This is a town that has received record investment since 2010, and is really getting the benefits of that.

I’ve lived in Hastings for 16 years, and it’s a fantastic town. But it’s just wrong to gloss over the problems in this way. Hastings was the 13th [pdf, p14] most deprived local authority in England in 2015, having risen [pdf, p14] from 20th place in 2010. Twitter soon corrected Rudd:

Did you mention unemployment is nearly twice that of the rest of the South East? pic.twitter.com/4UXtZINTH4

You and your cronies forgot to give a shout-out to Hastings foodbank. They feed the people you and your disgusting party have driven into poverty and destitution.
The Hastings Centre
The Ridge
Hastings
TN34 2SAhttps://t.co/V725pxCoe3

Rudd goes on to say:

We have a phenomenal arts community, music community, and of course local comedians like Eddie Izzard, Jo Brand, and Peter Chowney.

This is Rudd’s piss-poor attempt at comedy. She namechecks Eddie Izzard (who is from Bexhill, not Hastings, and very much Labour) and Jo Brand (also Labour). Her third ‘local comedian’ is Peter Chowney, Labour leader of Hastings council, who stood against Rudd at the 2017 general election. He reduced her majority from 4,796 in 2015 to just 346. So she can dismiss him as a “comedian” but it’s likely the last laugh will be on her next time there’s an election.

Is this a parody? Much like Amber Rudd’s hold on this seat. What was the majority again? 346? 😂😂

Rudd turns to the tiny band of followers she’s managed to persuade into this ill-advised venture, and asks them to big up Hastings. One tells us:

We’ve just received £6m from the government to invest in our education for the future of the children of this town. It’s fantastic.

I wonder whether that includes the 40% [pdf,p8] of children living in poverty in several Hastings wards? Or those who use after-school clubs for disabled children, scheduled to be closed by the Conservative-led county council? Or those living in refuges because of domestic violence – refuges which are under threat because of Conservative funding cuts?

There are more plaudits and nodding from her acolytes, which Twitter users loved:

We are not left behind. We are proud and excited by our town and by the opportunities here.

Rudd was certainly excited by the opportunities Hastings offers when she first stood as an MP here in 2010.  Asked by the Financial Times in 2013 why she wanted to stand in Hastings, she said:

I wanted to be within two hours of London and I could see we were going to win it.

My MP but not my representative

Amber Rudd is my MP, but she doesn’t represent me, or most people in Hastings. She represents other austerity-loving Conservatives who don’t give a toss about the people at the bottom. Hastings has a borough council that’s three quarters Labour. Most of us didn’t vote for Rudd. She almost certainly scraped in because of support in richer areas outside the town.

But I love this video: it might just persuade a few would-be Tory voters that they should choose another side:

And come the next election, Amber Rudd might be leaving the town she claims to love so much. We won’t miss her.