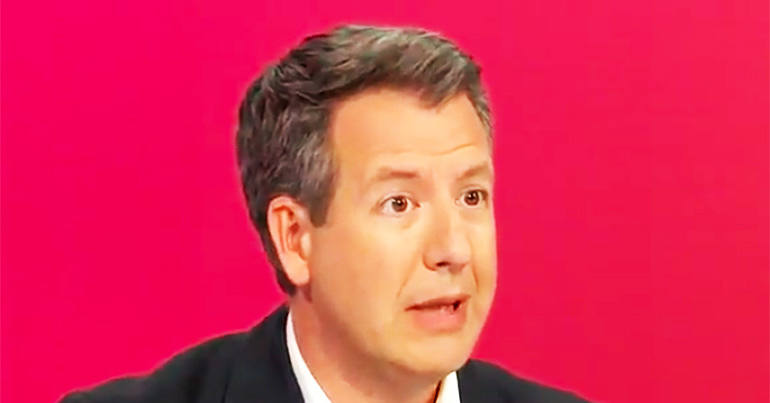 Committed Blairite and MP for Nottingham East Chris Leslie has been attacking Labour’s plans to mobilise £500 billion for a new national investment bank.

Even the Conservatives have noticed his farcical claim that Labour would have to “double income tax” and national insurance to raise the money. And now they’ve literally turned his opinions into a pro-Tory PR piece.

Matt Zarb-Cousin is a former spokesperson for Jeremy Corbyn and general purveyor of centrist tears. He pointed out on 12 September that Leslie’s sloppy understanding of fiscal policy has become Tory propaganda:

“Labour” MP Chris Leslie here providing an entirely economically illiterate analysis of Labour policy, which has simply been repurposed as a Conservative attack ad. Cans when this rump of Blairites get replaced ? https://t.co/YOJng0okjN

And people on Twitter didn’t need much of a push to share their own thoughts about Leslie:

A Labour government will guarantee no rises in income tax for those earning below £80,000 a year, and no increases in personal National Insurance Contributions or the rate of VAT.https://t.co/dnXWP5gbWu

Twitter users knocked sideways by Leslie’s gall brought up the damage that his wing of the Labour party caused to the British economy under Tony Blair:

Hi @ChrisLeslieMP while you're discussing mindbogglingly big numbers, what taxes needed to be increased to pay for the £240bn PFI debt created under New Labour or the £800bn added to the National Debt under the current Tories?

And the fact the Tories’ attack on Labour only highlighted their own hypocrisy didn’t escape notice:

So, let me get this straight, if Labour invests £500 bn, they have to double tax.

However, the Tories have borrowed £816 bn in 8 years and have nothing to show for and moreover, it did not have to increase tax.

If you are not buying this fear mongering RT pic.twitter.com/s7dXW7ujwj

With Leslie appearing on Question Time shortly after the Tories coopted his opinion, Twitter dealt the final blow:

I know it's a tough competition, but is there a less inspiring centrist MP than Chris Leslie? #BBCQT

There are certain eternal questions that may never be answered:

How did the universe begin?

Is there a God?

How the hell was Chris Leslie the Shadow Chancellor?#bbcqt

Chris Leslie is a relic of the past, all the way from his clipped Blairesque accent down to his 90s schoolboy quiff. And his dinosaur economics are past their sell by date.

From the deep pain caused by Conservative austerity to the 2008 financial crash spurred on by neoliberal economics, it doesn’t take an economics degree to see that the centrist model is failing.

Luckily, there is a party with a radical answer to Britain’s fiscal woes. And if Twitter is right, the dinosaurs of the Labour right-wing will have to look on from their post-parliamentary think tanks as their former party implements it.