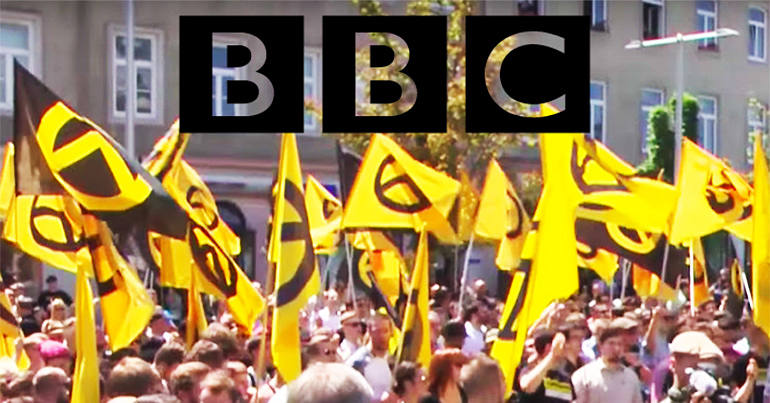 The BBC recently tried to skewer the ultra far-right group Generation Identity (GI) with an exposé of its de-facto spokesperson Martin Sellner.

Perhaps the article was well meant. But highlighting Sellner’s “striking” aesthetic and failing to properly explain why GI is a racist organisation, the public service broadcaster only served to spread the group’s hateful message to a huge audience.

And in doing so, it played straight into the hands of the far-right.

A crucial error the BBC made when reporting on Sellner was glorifying his ‘hipster fascist‘ aesthetic. Appraising Sellner’s style, the article refers to:

his striking haircut, fashionable skinny jeans and thick-rimmed glasses, he looks like a typical style-conscious 29-year-old

Groups like GI embrace contemporary fashion to disconnect themselves from the image of the skin-headed, swastika-donning neo-Nazis of the 80s and 90s. By doing so, they sidestep the negative baggage of skin-heads while normalising similar ideology.

The article failed to properly identify this tactic. Marvelling at the fact that racists can successfully exploit a “striking” aesthetic, not only glorifies far-right ideologues like Sellner. It also shows a complete inability to learn from the past.

It’s as if Hugo Boss hadn’t designed the Nazis’ uniforms.

Ask a racist if he’s racist

The BBC repeatedly asked Sellner if he is “a racist”. Instead of exposing his xenophobia, this line of questioning only gave Sellner the space to deny the claim – something fascists have been doing since the 1930s.

Although the article lists Sellner’s racist past, including his involvement in several neo-Nazi organisations prior to GI, it gives room for Sellner’s claim that the group is “not violent or racist”.

But GI calls for ‘ethnopluralism’, which according to the organisation Hope Not Hate, “in practice means separating and segregating people along racial lines.” On GI’s website, it states that “Our only inheritance is our land, our blood, our identity,” a heavy nod to the Nazi slogan ‘Blood and Soil’.

So why even bother asking if he’s racist?

Far-right frontmen like Sellner have learned how to repackage racist ideology in the rhetoric of democratic liberalism.

GI writes on its website that it champions “genuine freedom of speech” and “believe[s] in true diversity in which all peoples have a right to preserve and promote their group identity in their homelands”.

Buzzwords like “freedom” and “diversity”, terms venerated by the BBC, are subverted to attack the very ideas they are meant to represent.

In fact, the modern far-right purposely uses language that isn’t overtly racist in public to separate themselves from their plain-speaking predecessors. In the BBC article, Sellner apologises for using a racial slur to describe Pakistani people.

Instead of PR-hostile ethnic racism, this generation’s neo-fascist uses cultural racism, reducing individuals not to their ethnicity but to their cultural background. This is why Islamophobes often try to get away with claiming they’re not racist.

Tragically, the xenophobic narrative of “the clash of civilisations” often appears entirely acceptable. And even more tragically, the BBC often legitimises it.

Once again, the BBC tried to take on a far-right crusader and only succeeded in glamorising the far-right and spreading its racist message.

The far-right aims to blur facts with violent imagery and break up rational arguments with inflammatory language. As academic Richard Seymour puts it, neo-fascists use the method of “throwing verbal bricks” to exert power in the media.

If the BBC can’t rise to the challenge of taking down racists like Sellner, it should stop reporting on them. It’s not just a question of scoring own goals. The reality is that the BBC‘s own goals are endangering all of us.