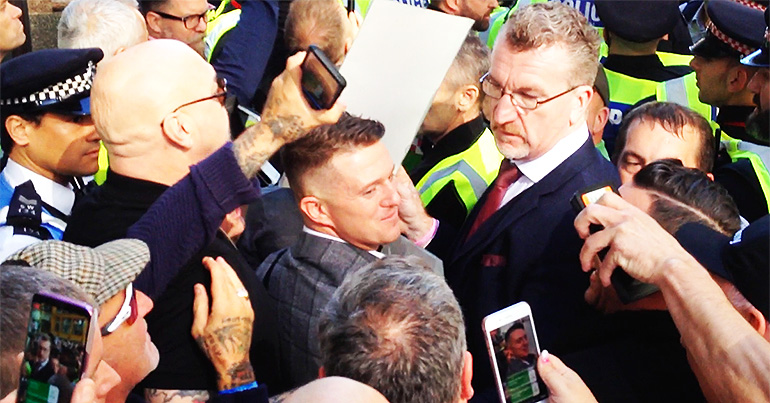 Stephen Yaxley-Lennon, aka Tommy Robinson, appeared at the Old Bailey on 27 September for a hearing in his case where he stands accused of contempt of court.

Hundreds of far-right protesters rallied outside the London Criminal Court to show their support for the founder of the English Defence League (EDL):

Chaos at the Old Bailey as huge crowd greets Tommy Robinson as he arrives for his re-hearing on contempt of court charges. pic.twitter.com/yutc2sTycI

Police originally arrested Yaxley-Lennon earlier this year in Leeds. He had allegedly broken the law by filming defendants on court premises during an ongoing trial, and live-streaming the footage via social media with biased comment.

A judge sentenced him to 10 months in prison and three more for breaching a prior suspended sentence. But he was later released on conditional bail on 1 August following an appeal plea.

The judge said he would receive written submissions from the parties involved in the trial before ruling on whether there would be a “substantive hearing” at a later date. The Guardian reports that he released Yaxley-Lennon on bail under the condition that he “does not approach within 400 metres of Leeds crown court, where his original hearing took place”.

Before Yaxley-Lennon arrived for his hearing at 10.30am, around 200 far-right protesters gathered outside the court.

His fans flew Union Jacks and Saint George’s Cross flags while banners with the UKIP logo and the breakaway anti-Islam party For Britain were on show at the rally. Supporters of the ultra-right organisation Generation Identity (GI) were also present.

Yaxley-Lennon later appeared at a window in the Old Bailey canteen and waved to his fans. Supporters shouted slogans of support back to him:

A small counter demonstration made up of around 30 people rallied outside the court before the hearing began. Far-right protesters greatly outnumbered the anti-racist demonstrators, who dispersed quickly.

Several hours later, a 20-year-old student arrived outside the court. She was holding a placard listing Yaxley-Lennon’s previous convictions. The far-right verbally abused the woman. They then stole her placard and ripped it in two:

Small scuffles broke out between police and fans of Yaxley-Lennon after he left court:

Later, far-right protesters demanded that police remove a reporter they believed to be from the anti-racism campaign group Hope Not Hate, saying “he doesn’t belong here”. Officers allowed the reporter to leave the demonstration behind the police line.

During the demonstration, protesters repeatedly shouted out the term “Antifa” in an attempt to attract the attention of anti-racist protesters in the crowd. They followed up with the warning: “We know who you are”.

If Yaxley-Lennon is convicted of the alleged offence, he could spend up to two years in prison.

Speaking to press outside the Old Bailey, Yaxley-Lennon blamed the delays in proceedings on the courts, stating: “I believe they want me in prison for Christmas”.