Get your law books out. The Tommy Robinson saga has gone full Inception. - Canary 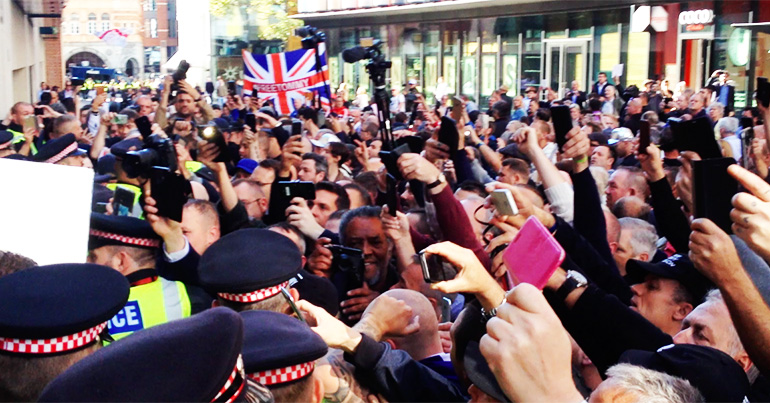 Stephen Yaxley-Lennon, aka Tommy Robinson, attended a hearing at the Old Bailey over contempt of court allegations on Thursday 27 September.

Afterwards, one of his key supporters posted a video of the ex-English Defence League (EDL) leader apparently inside the court. Ever since, accusations of contempt of court during a contempt of court hearing have been flying all over the internet.

And it’s all gone a little Inception.

BBC home affairs correspondent Dominic Casciani was one of the first to point out potential legal problems:

One of Tommy Robinson's key supporters and funders, Ezra Levant, has posted a video of the activist inside the Old Bailey. You can't film within the precincts of a criminal court. I can't send the link – because I'd be in contempt of court for doing so.

And soon after, police started investigating the reports:

BREAKING: Detectives are investigating whether a key supporter of Tommy Robinson broke the law by filming the anti-Islam campaigner inside the Old Bailey.

City of London Police: “We have been made aware of a video on social media which appears to show filming taking place inside the Central Criminal Court, and has been shared online. We will be looking into whether any offences have been committed.”

Under Section 41 of the Criminal Justice Act 1925 (CJA 1925), it is an offence to photograph people within court precincts.

But others could also be in trouble.

It’s also illegal to publish videos filmed inside a court:

A few people have asked me about this video. Don’t share it – those involved have likely committed a criminal offence by recording it, and by sharing it you are at risk of doing likewise. https://t.co/3I8AqqjwiM

Not one to shy away from a legal scuffle, far-right ideologue Katie Hopkins reweeted the video:

The video has been retweeted by Katie Hopkins. Again, I cannot provide the link because (for those who wish to understand media law) that could be regarded as Contempt of Court and I don’t fancy an afternoon in the cells.

The Canary can’t actually share her Tweet as it contains the video, but Hopkins doesn’t seem too worried about the accusations:

And the footage was reportedly shared on Yaxley-Lennon’s official Facebook page.

By Friday afternoon, it had racked up more than 300,000 views. The question is, does sharing the video count as contempt of court?

In fact, police originally arrested Yaxley-Lennon earlier in 2018 in Leeds for filming defendants on court premises during an ongoing trial. He is alleged to have live-streamed the footage via social media with biased comment.

It remains unclear whether the video would fall under the conditions for “interference with the administration of justice”, crucial to contempt of court legislation.

But this hasn’t stopped mainstream media outlets reporting on the issue:

Yaxley-Lennon has himself accused journalists of breaking the same rules that he is now standing trial for.

But going by his supporter’s actions, it seems that the EDL founder and his entourage could do with brushing up on English law.

Otherwise we could face many more contempt of course cases. And to be honest, no one really wants the headache.